With rumors abuzz that the premier West End production of Dreamgirls will transfer to New York for the show’s first-ever Broadway revival sometime next year, Broadway Blog correspondent Jim Gladstone took in the spectacle at London’s Savoy theater last week to file this report…

In London, most of the chatter around the first UK staging of Dreamgirls has surrounded Amber Riley, best known from television’s Glee, in the role of Effie White. Following in the Tony- and Grammy-winning footsteps of the original production’s Jennifer Holiday and the Oscar heels of the film version’s Jennifer Hudson, Riley manages to put her own memorable spin on the beleaguered character, loosely based on Florence Ballard, who was ousted from the original lineup of the Supremes. (The part was first written for Nell Carter, who bowed out after being offered the TV sitcom Gimme A Break).

Riley works hard to avoid beatifying Effie. Her emphasis on the character’s immature, sometimes boorish self-centeredness and conscious refusal to adjust her gospel-infused singing style to meet commercial needs make Effie not so much a tragic emotional punching bag as a tough, independent spirit, slowly growing into her own. If past iterations of the show have imprinted your memory with a notion of Effie as the poor, picked-upon fat girl, Riley will shake you back into three-dimensions.

When Riley delivers the Act 1 closer, “I Am Telling You I’m Not Going,” raising the rafters in a multi-octave performance that not once gets ragged around the edges, the audience gets everything they’ve been nervously hoping for. But it’s her deeply resonant, jazz-inflected Act 2 rendition of “I Am Changing” that stuns. It’s the most soulful song in Henry Krieger and Tom Eyen’s score but can easily get lost amidst the flash and gleam of their Motown pastiche.

In an unstraightened, natural looking wig and African-print caftan, Riley delivers a warm, precisely modulated performance far more akin to Jill Scott than Diana Ross. Given the expectations audiences place on “I Am Telling…” from the moment they buy a ticket to Dreamgirls, it is this number that becomes the fresher showstopper.

While greeted with applause from her first entrance, Riley—like the rest of the cast—doesn’t quite click into character until after the show’s rapid-fire opening scenes, in which her vocal trio, The Dreams, competes in an Apollo-esque talent show; gets signed by manager Curtis Taylor, Jr. (Joe Aaron Reid); and hits the road singing back-up for gritty soul man James “Thunder” Early, played with palpable electricity by Adam J. Bernard, who brings more than an inkling of Prince to the role.

That’s a lot of narrative to cover in about 30 minutes. It’s executed with plenty of peppy group vocalizing, flashy costume changes, and elegantly understated stagecraft that seamlessly shifts the viewer’s perspective between those of an audience member and a backstage eavesdropper. This fluid, almost cinematic movement was conceived by director/choreographer Michael Bennett for the original 1981 production, but the style also plays into the antic tendencies of director/choreographer Casey Nicholaw (Book of Mormon, Aladdin, Something Rotten!), whose instinct for speedy, vacuum-packed action sometimes seems to underestimate the attention span and empathy of his audience.

Riley—like the rest of the cast—is limited to telegraphic gestures and fleeting facial registrations of emotion. Effie’s cute here, stubborn there, obnoxious for a second or two, then cheerful. The non-stop music and movement won’t take no for an answer, grabbing the audience by the lapels and pulling it into the world of the show. Still, a part of you will want to shout “Take a breath!”

That exhalation happens about halfway through the first act with the ballad “Family,” sung by Joshua Liburd, as Effie’s brother C.C., along with Riley and Liisi LaFontaine, who plays Deena, the Diana Ross doppelganger. The actors remain relatively static during the short but sweet respite. They make meaningful eye contact with one another as they stand and sing in harmony, and the depth of the characters’ relationships begin to soak in. From there, this production of Dreamgirls feels not just glitzy, but rich.

Toward the end of the second act, LaFontaine and Riley perform a duet of “Listen,” a song written for the 2006 film version. No doubt shoehorned in to appease fans who first met Dreamgirls at the movies, the song is presented as a moment of mutual forgiveness and bonding between Effie and Deena. (In the film, it’s a Beyonce solo showcase sung against a civil rights montage). Taken as a whole, Dreamgirls is much less about how women support each other than how they are mistreated by men.

Nearly four decades into Dreamgirls’ history, comparisons between the film and various stage iterations are inevitable—and frankly part of the fun of taking in a revival. While the core appeal of Dreamgirls will be its emotional impact, it also offers much fodder for intellectual musing as time goes on. It’s hard not to reflect in the cultural hall of mirrors where Dreamgirls—which was modeled on Motown—paved the way for Motown: The Musical, now playing concurrently in London. Which show is more of a fiction? Which of their scores has more impact in the context of a dramatic narrative? And, of course, which Effie is the effing best?

The West End production is currently scheduled to run through February 10, 2018, with Amber Riley as Effie White in Tuesday through Saturday evening performances until November 18, 2017. 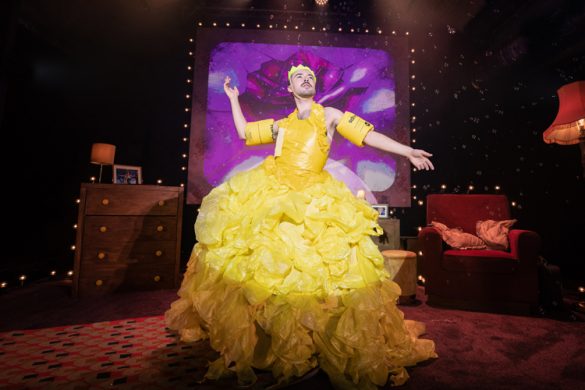