With approximately 11 shows to perform on a weekly basis, Katie Walker doesn’t find herself with much free time. The North Carolina native, who serves both as a dance captain and performer in the New York Spectacular Starring the Radio City Rockettes, is entering her ninth year with the famous precision dance company.

Best known for the Christmas Spectacular, the Rockettes are currently starring in a summer spectacle that is thrilling audiences and critics alike. This marks the second consecutive year for the non-holiday themed show, which is a splashy love letter to New York. It also heralds a fresh approach for the Rockettes through Emmy Award-winning choreographer Mia Michaels.

Walker recently spoke with the Broadway Blog over the phone to discuss the artistic process and the improved changes she’s noticed since joining the troupe. Katie Walker (Photo provided by MSG via the Broadway Blog.)

BB: How long have you been with the Rockettes and how did you land such a coveted gig?

KW: I’ve been with the Rockettes since 2008. The audition process was probably the most intense audition of my life. It’s a two-day process if you make it past the callbacks. There are approximately 500 other girls and you go in 100 at a time. You have about 20 minutes to learn the choreography. Then you perform it three at a time. It’s quick, it’s a lot of pressure, and after you perform it, they will make an initial cut. Then they repeat that process throughout the day. At the end of the day, about 50 dancers are chosen to come back for Day Two where they do it all over again. Then, it’s a waiting game. I auditioned in April and didn’t get the acceptance call until July.

BB: How did the collaboration with Mia Michaels emerge?

KW: We worked with her last year on the opening number (Taylor Swift’s “Welcome to New York”). We had a little time to work with her on that, but this year [as director and choreographer] we had the chance to work with her every single day. We started pre-production for the show on January 12 and would meet from 11 a.m. until 10 p.m. to find the balance between her world and ours. We then called in some of the Rockettes to see how the material would work on a larger scale. Then Karen Keeler, director of the Rockettes creative, Mia and myself would put the formations on paper.

BB: What is one of the major changes you noticed with the New York Spectacular from last year to this year?

KW: The biggest difference is that this year, the Rockettes are featured non-stop. There is one number that we do where we have literally 90 seconds to change costumes and run back on stage. This year, thanks to Mia, the dance has an edgier style. The choreography is much more modern, physical, and contemporary but it still maintains the precision and unity that the Rockettes are known for.

BB: How has the Christmas Spectacular changed?

KW: When I started in 2008, many of the dances had been in the show for years. Over the last few years, they’ve introduced a new number every three years to make it a bit more modern and lyrical. It’s a nice balance between the classic and the contemporary.

BB: There’s a lengthy rain scene in the show in which all of the Rockettes are dancing to “Singin’ in the Rain.” How are you able to get through that with without slipping and sliding?

KW: We have taps at the bottom of our rain boots and sometimes we put tape at the bottom. Even then, the stage and the water will wash it away. We rehearsed that scene so much during technical rehearsals. Because of how the rain falls, we have to change the balance on our feet or the pressure we are putting on the stage. BB: Is there a favorite scene in the show for you?

KW: I absolutely love the finale, which we call “Radio City New York, New York”. It’s a perfect balance between the traditional and the contemporary. Mia put a modern edge on it and it pushed us away from “being in a box” to giving us the freedom to “just dance it.” Frank Sinatra’s famous song is playing, a backdrop reveals the skyline of New York, and the audience is on its feet. It’s my proudest moment.

BB: How do you maintain your stamina through this process?

KW: Once we start rehearsals, we rehearse six hours a day, six days per week. Other activities like the gym and yoga go by the wayside and the rehearsal itself is really our stamina building activity. There is no downtime aside from a lunch break. After one week, we’re all in great shape for show mode. Now that we are performing, we have a little more free time. We are fortunate to have an athletic training center and gym at Radio City, so when we have long gaps between shows, many of us will run on the treadmill in order to keep our downtime active.

BB: What is the most rewarding aspect of being a Rockette?

KW: One of the most amazing things, in addition to performing, is so much of the outside work we get to do. We are so well known and viewed as a historical icon of New York City. We get to do a ton of community work with children and at children’s hospitals. That interaction on a human level is one of my favorite things about this job. This year, as assistant choreographer, I taught nearly every dance in the show myself. To prepare 41 other Rockettes for a new show that was created for them was a huge moment for me on opening night.

BB: What is the most challenging?

KW: None of it is really hard because it’s a job that we love so much. Even though we have to wake up sometimes at 6 a.m. to do a 9 a.m. show, we don’t mind because we get to have so many cool experiences. The physical wear is probably the most challenging because our muscles get tired and things get sore, but we just push through it and not let it affect our performances.

BB: I imagine after this show wraps on August 7, you’ll start preparation for the Christmas Spectacular?

KW: We will. We’ll have about four weeks off and I hope to visit my family in Elon, North Carolina.

BB: I will spread the word to my fellow cynical New Yorker friends that this show is not just for tourists!

Ryan Leeds is a freelance theater journalist who lives in Manhattan. He is the Chief Theater Critic for Manhattan Digest and a frequent contributor to Dramatics and Teaching Theatre Magazines. Follow him on twitter: @Ry_Runner or on Facebook. 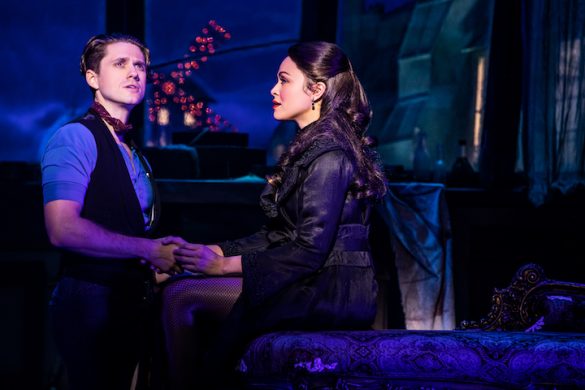