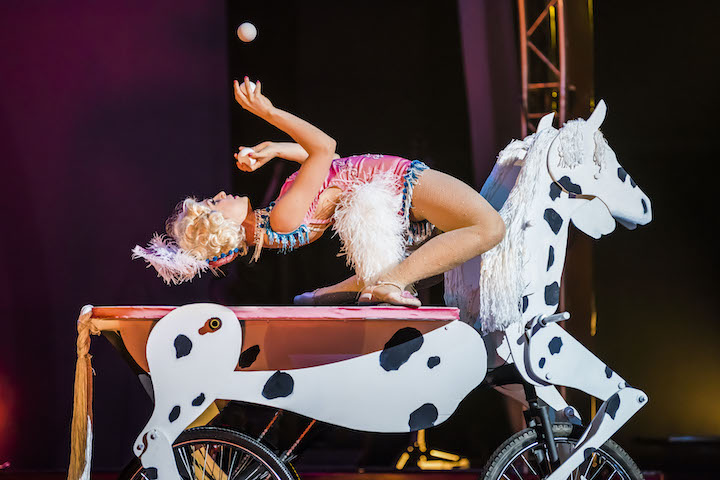 How do you fill a 42-foot diameter space with wonder, excitement, heart and awe? Invite Cirque Mechanics to fill the stage at The New Victory Theater with all of the magic of a grand circus and invite audiences to get a sweet glimpse into what’s happening behind the stage. Cirque Mechanics’ production of 42 Ft.: A Menagerie of Mechanical Marvels fills its 42 feet not with animal acts, but with the thrilling and touching work of twelve outstanding performers.

42 Ft simply and gracefully tells the story of a lost soul (Justin Therrien) who stumbles upon the backlot of a circus and is instantly filled with curiosity and delight. In his attempts to ingratiate himself to the various performers, he lugs set pieces, posts bills and perhaps meets the love of his life. Through this lens, Cirque Mechanics delivers a clear and nuanced story that showcases their expert acrobats, trapeze artists and more. 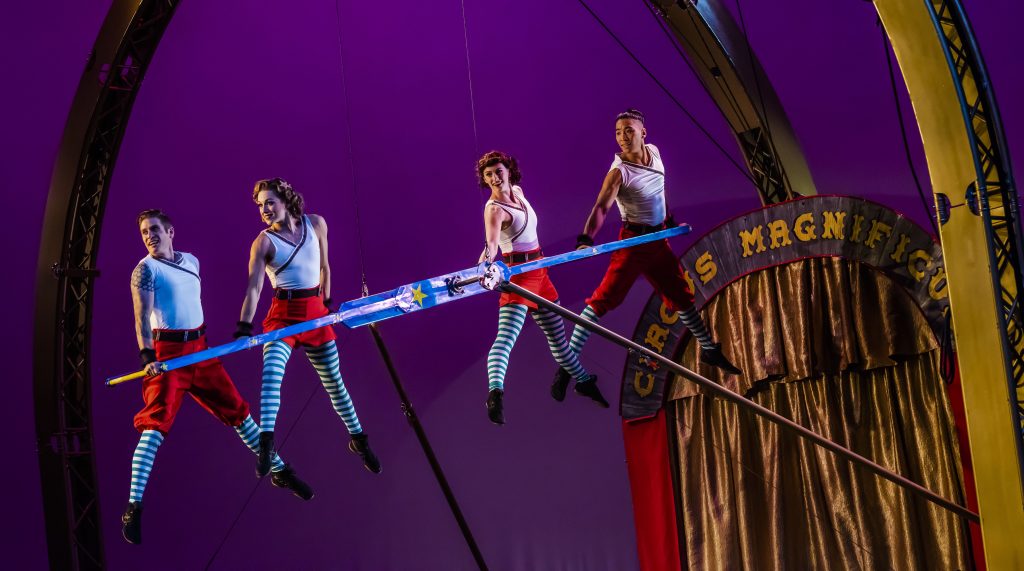 As is so delightfully often the case with productions at The New Victory Theater, this production is perfect for children of any age but never once talks down to anyone or expects too little of their pint-sized audience. Instead of base buffoonery and pandering flashes of light and color, this production uses accomplished circus artists, expertly dedicated to their crafts like clowning and mime, Russian swing, juggling and slack wire. Layering emotion and context to their performances, Cirque Mechanics keeps the audience of all ages enthralled in a meaningful way.

A standout amongst some truly gifted performers is Battulga Battogtokh’s Strongman. Taking the circus sideshow standby of the towering brute, Battogtokh does all the literal heavy lifting. His eyes glimmer as he connects with each pair of eyes staring up at him as he hefts and twirls with wonder. His performance is truly unexpected and strangely lovely. Also beautifully giving soul to her skill, Esther De Monteflores handles the slack wire (similar to a tight wire but looser so that a wider array of acrobatics and balancing can be managed) with absolute precision. The pair (De Monteflores and her wire) seem to have a deep relationship, and it’s enthralling.

Adding another layer of purposeful thrill, Sean Riley’s rotating 42-foot circus ring invites audiences behind the scenes as it manually turns, putting captivated viewers in the center of the action at all times.

With all of the holiday-themed entertainment available this season, 42 Ft is a perfect outing for a mindful and unique night out with the little (and not so little) ones. The ensemble clearly loves what they do, and it shines in every death-defying move and honest smile, touching us and amazing us all at the same time.