Top Posts
‘Company’ to Hit the Road on North American...
Meet the Full Cast of ‘Shucked,’ Coming to...
Full Cast for ‘Parade’ Announced
Stephen McKinley Henderson Gives the Performance of His...
The McKittrick Hotel Announces the Return of ‘The...
Broadway Stars Honored with Academy Award Nominations
Taylor Trensch, Danny Wolohan, and More Join the...
A Gay Road Trip Comes to The Brick...
Maude Apatow of ‘Euphoria’ is the Next Audrey...
Tony Award Winners to Star in ‘Hercules’ at...
Home Show Folk 5 Holiday Showtunes to Add to Your Winter Playlist
Show Folk 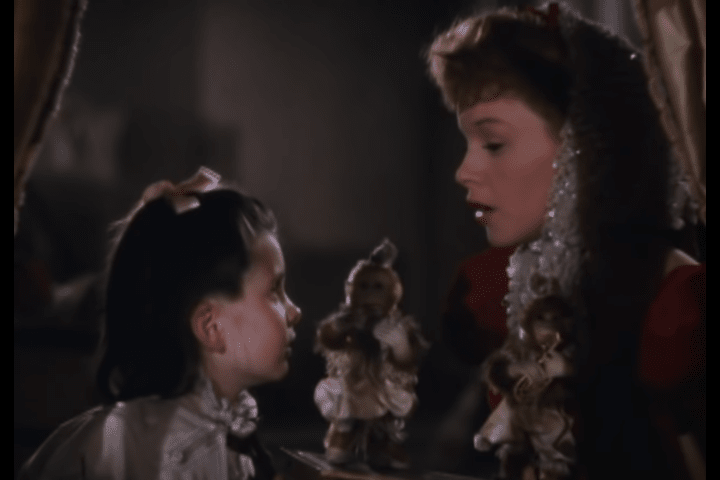 Margaret O’Brien and Judy Garland in ‘Meet Me in St. Louis’

While we could all listen to wintry albums from Broadway legends like Idina Menzel or Barbra Streisand, some musicals also offer fantastic Christmas and Chanukah numbers that put you in the holiday mood. Below, The Broadway Blog highlights just five such songs to add to your playlist. May your holidays be merry and bright!

1 “The Chanukah Party” from Caroline, or Change

2 “Have Yourself a Merry Little Christmas” from Meet Me in St. Louis

Judy Garland introduced this number in the 1943 MGM musical Meet Me in St. Louis. A blue, melancholic song, Garland’s trembling voice reaches for hope even as her family is set to endure drastic changes. It is a bona fide musical theater song turned into a bona fide Christmas classic.

3 “We Need a Little Christmas” from Mame

The late, great Angela Lansbury sang this song in her iconic role of Auntie Mame, and so iconic is this number that it was, of course, covered on “Glee.” A real let’s-get-ready-for-the-big-day song, “We Need a Little Christmas” reminds us of one of the most ephemeral but memorable days of the year.

4 “Hard Candy Christmas” from The Best Little Whorehouse in Texas

This 1978 Broadway musical got the royal film treatment in 1982 and starred Dolly Parton. Like “Have Yourself a Merry Little Christmas,” this song is a bit bittersweet as the ladies in it sing, “I’ll be fine and dandy, lord it’s like a hard candy Christmas.”

Irving Berlin always brings the holiday cheer in this anticipatory song: who isn’t dreaming of a white Christmas, just like the ones we used to know? This radio favorite originated in the 1954 musical film and has also been heard on Broadway, recently in a Roundabout revival starring Bryce Pinkham.