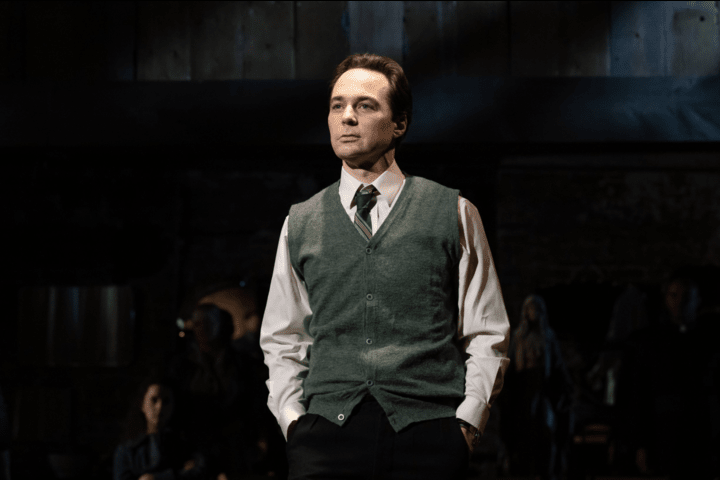 Jim Parsons in ‘A Man of No Importance,’ photo by Julieta Cervantes.

It’s wonderfully fitting that John Doyle’s swan song at Classic Stage Company is a paean to theater. After stepping down as artistic director, he reminds us of the contagious beauty of his beloved art form in A Man of No Importance, a musical with all the warmth of a heated oven.

Jim Parsons stars as Alfie, a closeted gay man in 1964 Dublin who funnels the love he might express to another into the St. Imelda’s Players, a ragtag theater troupe known for its less-than-stellar works. In a production as spare and suggestive as rehearsal itself, Doyle (also the scenic designer) breathes wonderful life onto his bare wooden stage where his cast plays strings and beats drums. This touch, the exposed upstage walls of the theater, and the stage’s three-quarter thrust all invite the audience in and remind them, despite the single man in the musical’s name, this is a work about community.

And what a rich one it is. Mare Winningham is properly prim as Alfie’s sister Lily while also illuminating her inner spark; Mary Beth Peil earns laughs as an elder member of the theater troupe; and A.J. Shively brings a gritty grace to Alfie’s friend, coworker, and crush, Robbie. His “Streets of Dublin” is not the bravado one you may know from the original cast recording, as sung by baritone powerhouse Steven Pasquale, but it is no less rousing, and certainly captures what’s so magical about Ireland’s capital, and Doyle’s production. Stephen Flaherty and Lynn Ahrens’ score makes sweet but never cloying use of lilting Irish tunes, and even Parsons himself, perfectly cast as a lonely, aging man, can carry a tune and more than handily communicate his character’s isolation and yearning. It’s also moving to hear a book, dotted with wholesome jokes, by Terrence McNally,  another artist with a love for theater as strong as Alfie’s.

As Alfie contemplates his sexuality, mounts an Oscar Wilde play, and seeks to better understand himself through art, the well-sung production glides along at a comfortable pace. For those looking for a wholesome escape and a charming story, abide by Dublin superfan Robbie’s words: “come out with me, and you’ll see what you’re missing in life.”