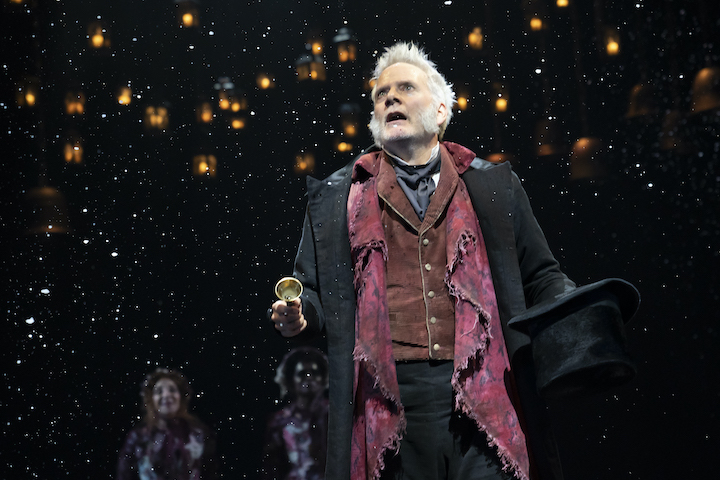 You know you’re in for a holiday treat when Tony Award winner Andrea Martin hands you a bag of Tate’s Bake Shop chocolate chip cookies to nibble on before the lights dim. This is A Christmas Carol that doesn’t hide from its indulgences.

New York City is not short on Dickensian theatrical presentations. At least five productions are playing around town, from The Imbible: Christmas Carol Cocktails to A Christmas Carol in Harlem. But the splashiest endeavor is London’s Old Vic production, which arrives on Broadway this season and is bound to be an annual tradition.

Adapted by Jack Thorne from Charles Dickens’ 1843 novella of the same name, most are familiar with the dreamlike tale of Ebenezer Scrooge. Three ghosts (along with his deceased business partner) visit the miserly debt collector on Christmas Eve, each offering a glimpse into how Scrooge and those around him have been affected by his cold, ungenerous heart. By Christmas morning, Scrooge inevitably discovers the errs of his ways, loosens up the purse strings, and enjoys the festive holiday with family and friends. 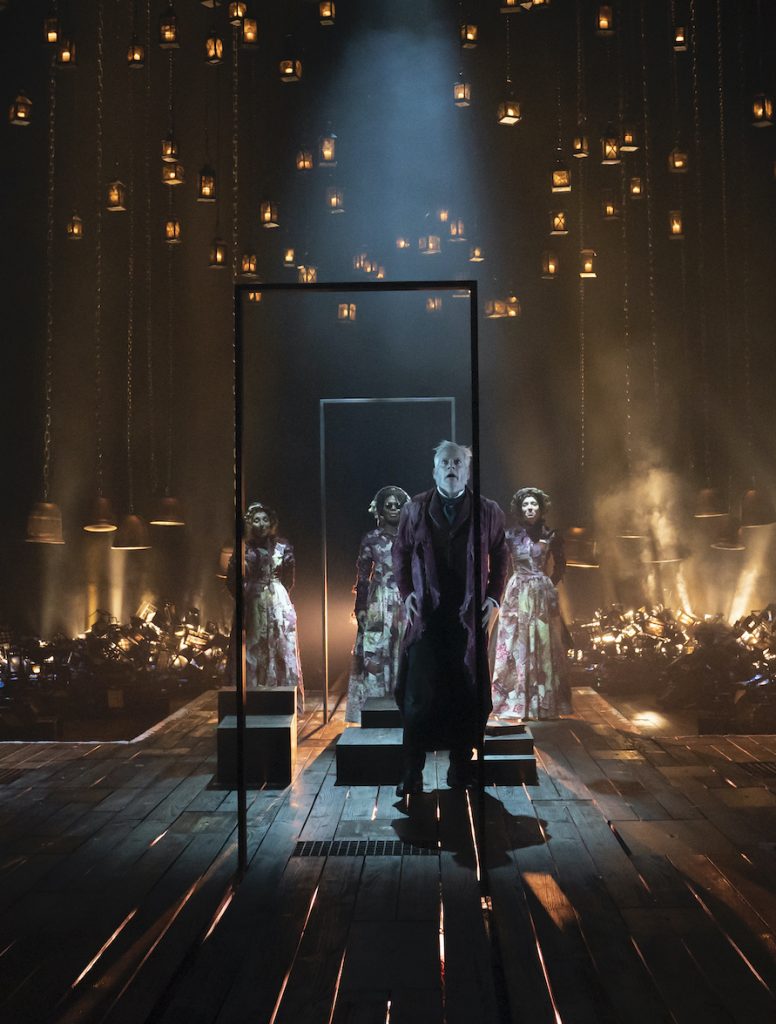 Scrooge sits at the epicenter of Dickens’ tale, and without an anchor to the fantastical, A Christmas Carol iterations often rest on its familiar laurels. Campbell Scott embraces the role, more stoic than curmudgeonly, and with enough bravado to make one believe that Ebenezer could have a full final chapter.

It is through these apparitions that Ebenezer gains a deeper understanding of his circumstances and choices. Thorne’s adaptation doesn’t shy away from the impact of his verbally abusive father, setting a clear example of how words can destroy a man’s soul as well as his heart. As a young adult, he dismisses his great love Belle (a captivating Sarah Hunt) with the belief that he’s not worthy of her hand in marriage until he can return with a coach and horses to prove his financial solvency. Years later, he returns to make amends, but Belle has moved on though it’s evident there is still a yearning for a life that could have been.

A beautiful synergy of Victorian costumes (Rob Howell, who also designed the sets), mood-shifting lighting (Hugh Vanstone) and sound effects (Simon Baker) worthy of a vintage radio play elevates A Chrismas Carol to the magical, capped by an immersive banquet scene with a cornucopia of holiday harvest cascading from the balcony and an encompassing ethereal snowstorm.

Some might raise an eyebrow at the British dialects (or lack thereof) peppered throughout the ensemble. Still, A Christmas Carol’s live music (including handbells), English clog dancing and general merriment are enough to warm even the coldest coal heart. And when Tiny Tim (alternating between Jai Ram Srinivasan and Sebastian Ortiz) gleefully exclaims, “God bless us, every one!”  you can’t help but believe him.