Top Posts
Imelda Staunton Will Lead ‘Hello, Dolly!’ in West...
‘Bridgerton’ Star Jonathan Bailey Will Play Fiyero in...
Review: ‘Stranger Sings! The Parody Musical’ Is Still...
Performances Have Begun for ‘The Piano Lesson’
‘Monet’s Garden, The Immersive Experience’ Comes to NYC...
‘The Phantom of the Opera’ Will Close on...
Watch: Little Amal Arrives at JFK, Beginning 17...
Lillias White Takes the Stage as Hermes in...
‘The Music Man’ Sets Broadway Closing Date
‘Heathers: The Musical’ Releases First Clip Ahead of...
Home Beyond Broadway In Raven Theatre’s ‘A Doll’s House,’ Nora is as Relevant as Ever
Beyond BroadwayReviews 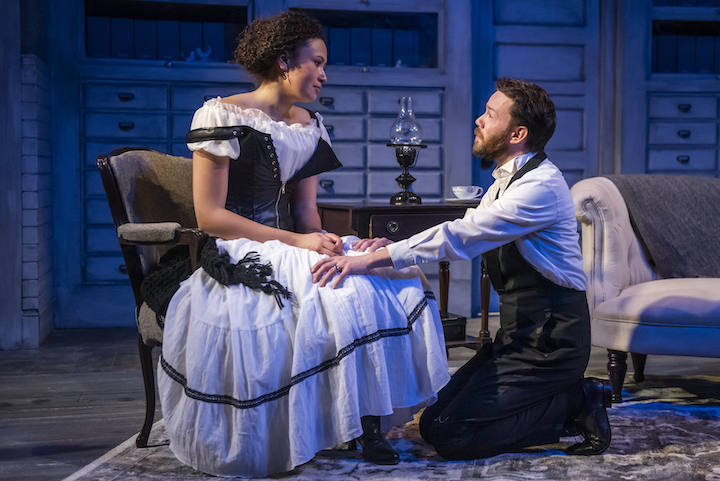 Originally premiering at more than 140 years ago at Copenhagen’s Royal Theatre, famed Norwegian playwright Henrik Ibsen’s A Doll’s House continues to be celebrated as a feminist work ahead of its time. Engaging a culturally incendiary 19th-century argument that a woman’s rightful, intellectual and economic place is wherever she believes it to be, Ibsen’s work created an immediate, global firestorm. Raven Theatre’s sharp revival (adapted by Anne-Charlotte Hanes Harvey and Kristen Brandt) demonstrates that the play can still singe in early 2020.

The familiar plot centers on the complicated marriage of Nora (Amira Danan), a traditional housewife and mother of three who seems to exist for the adornment, entertainment and comfort of her patronizing, upwardly mobile husband, Torvald (Gage Wallace). When a childhood friend of Nora’s reappears after a long absence, a secret is revealed that sets off two hours and 15 minutes of gendered suspense. Will she be discovered, perhaps judged by her neighbors, but ultimately protected by her devoted husband? Or will Nora prevail in her efforts to keep her sins of well-meaning ignorance hidden?

Finally understanding that the sheltered existence that took her from her father’s home to Torvald’s marital bed created a host of unintended and unhappy consequences, Nora leaves her family behind with little more than the clothes on her back, on a singular mission to obtain educated independence.

The play’s denouement still has the power to produce audible gasps in the 21st century. The audience, privy only to the superficial thoughts and actions of both Nora and Torvald, becomes trained to take both spouses at face value. Director Lauren Shouse and her talented cast prove that a well-known conclusion can still offer genuine surprise, dropping subtle breadcrumbs throughout the play that suggest Nora’s “Aha!” moment is subconscious work years in the making. 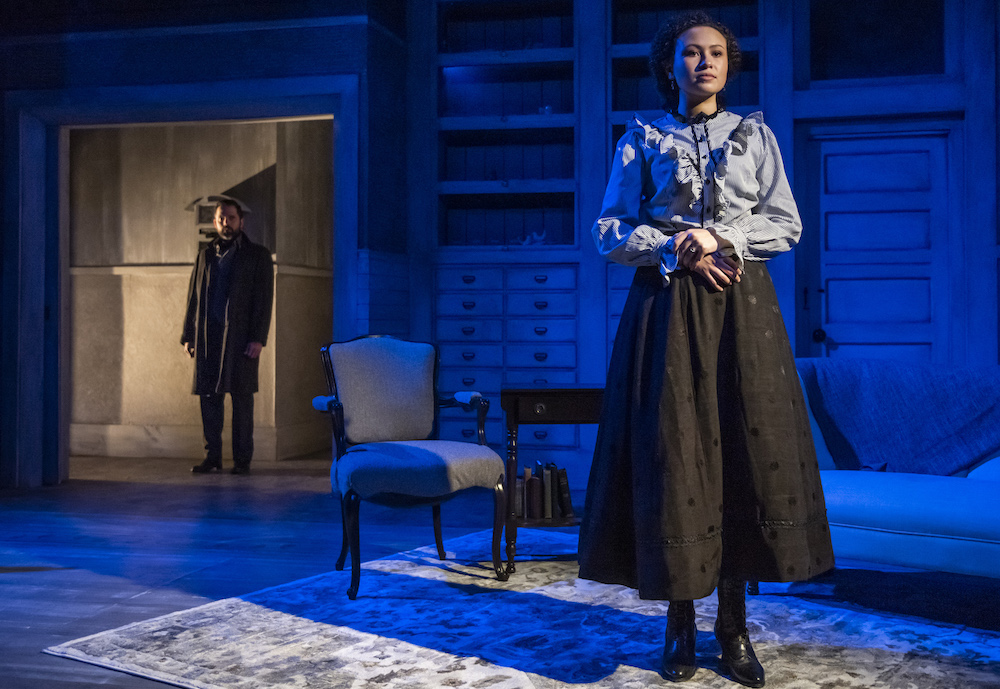 Torvald — shallow, unimaginative and condescending — is a man who enjoys telling anyone who will listen about his hard work and moral rectitude. He is at his most interesting when interacting with longtime family friend and secret Nora acolyte, Dr. Rank (Terry Gallagher). Rank, physically aggrieved and cynical, is all-too-aware that life’s pleasures are ephemeral and meant to be enjoyed. While his bond with the hedonist-lite and beautiful Nora makes perfect sense, it’s hard to understand the character’s amusement with kill-joy Torvald.

Yet Wallace allows his character to display endearing flashes of heroine worship toward his wife that hint at greater, if repressed, emotional depth. His clear, superficially besotted yearning must have weakened the knees of a young Nora, as undoubtedly as it does the audience. It is easy to love someone who routinely espouses one’s perfection.

But thanks to Danan’s commanding performance, we sense that Nora never fully trusted her husband’s placement of her on that pedestal. It’s evident that she sees herself as window dressing, albeit fluent in niceties. Danan infuses Nora’s Act I trifling dialogue with a sort of omniscient dread that makes a familiar journey feel novel. This character sees it all coming – even if she doesn’t know it until the moment she picks up her small bag and walks out the front door.

Though productions of A Doll’s House are ubiquitous on college campuses and in summer stock theaters the world over, Raven Theatre’s (Crumbs From the Table of Joy, Hoodoo Love) take on Ibsen’s beloved social agitator makes it worth revisiting this iconic work.