Top Posts
‘The Phantom of the Opera’ Delays Broadway Closing...
A Christmas Guide to New York Theater
Ingrid Michaelson Rings in the Holidays for Two...
Review: ‘& Juliet’ Is A Daffy, Absurdly Joyous...
Jinkx Monsoon & BenDeLaCreme’s ‘The Jinkx & DeLa...
Review: Victoria Clark Shines in the Refreshingly Original...
Review: Mike Birbiglia Astounds in ‘The Old Man...
A Sondheim Stocking Stuffer: New Book Offers Insightful...
From ‘Tattooed Lady’ to ‘KPOP,’ Plus A Quick...
Museum of Broadway Will Open Its Doors November...
Home Reviews A Messy ‘Richard III’ At Shakespeare in the Park, Anchored By A Ferocious Danai Gurira
Reviews 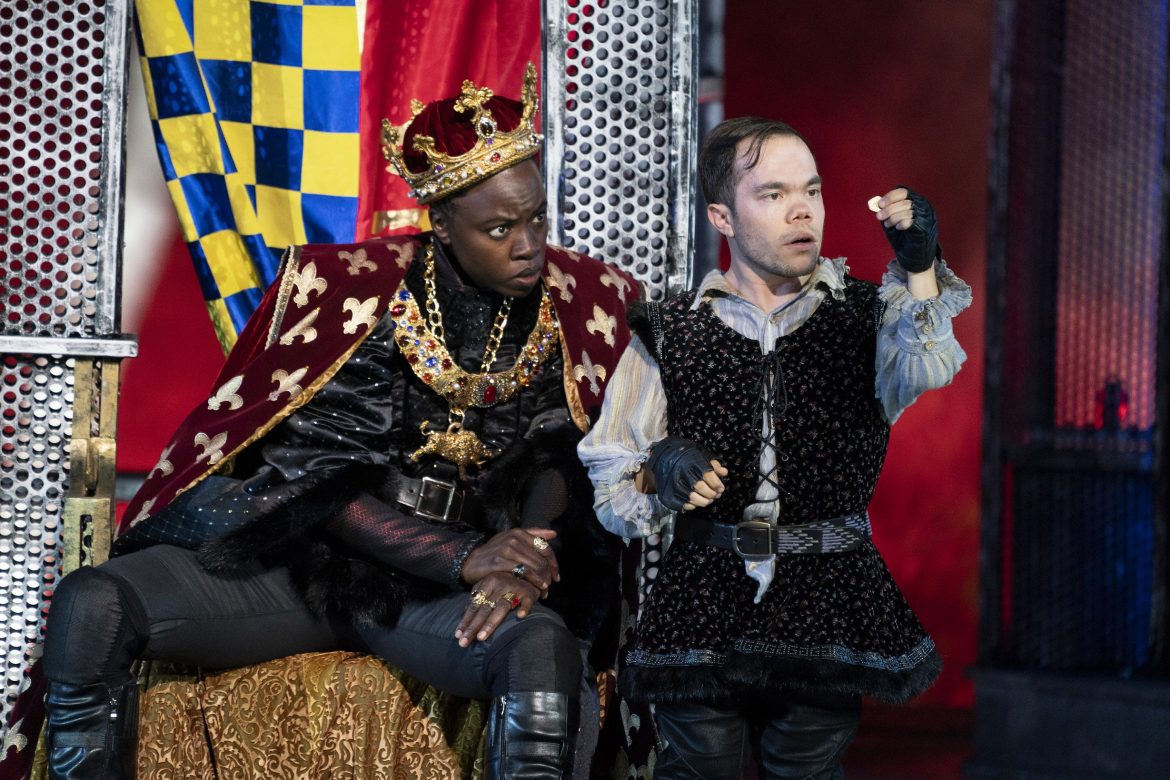 One thing you can say about director Robert O’Hara’s revivals of classic works: he is consistent in his inconsistency.

When O’Hara staged a revival of Eugene O’Neill’s Long Day’s Journey Into Night with Audible this January, he slashed the lengthily work down to two intermissionless hours and kinda, sorta transposed the story into the height of the Covid-19 crisis—though without concerning himself with details that didn’t match up. He also cast Black actors as the young Tyrones, but in a colorblind manner that eschewed commentary.

O’Hara’s revivals do not sweat the details. If something appeals to the director but doesn’t quite match up textually, he does it anyway. It’s a consciously messy approach that made up for a bumpy, but often powerful Long Day’s Journey.

No surprise that with O’Hara’s revival of Richard III at the Delacorte Theater in Central Park, the results are much the same. It is a muddy, fitfully engrossing production, frequently undercut by O’Hara’s randomness, but anchored by a ferocious lead performance from Danai Gurira.

Gurira does not take on any physical disability for her Richard. When he speaks of being “deformed” and “cheated of feature,” Gurira shoves forth an exposed arm and indicates her Black skin. But O’Hara is only fitfully interested in the theme of race as social “deformity,” and that idea is more or less absent by the second act.

Gurira herself is fantastic, frequently hilarious yet truly frightening at the same time. The actress has particular fun with Richard‘s quick descent into madness after he finally ascends to the throne. The speed with which Richard turns on everyone around him even after achieving his goal is both absurd and terrifying, and Gurira hits on that duality expertly.

The ensemble around Gurira is uniformly strong. Particular standouts include Sharon Washington as Queen Margaret, chewing the scenery with aplomb; Gregg Mozgala in dual rules as King Edward IV and Richmond, pathetic as the former and commanding as the latter; and the invaluable Michael Potts as Lord Stanley, a slithery yet melancholy political operative.

The pacing wilts during the play’s extended scenes of political machinations, which makes up much of this evening’s first half. O’Hara lacks a particular take on these sections, so they just sort of sit there on stage, washing numbly over the audience. Here, the production might have benefited from an overarching take on the play, which O’Hara ultimately just does not have.

Still, things perks up considerably in its latter half–which is, in fairness, when Shakespeare’s text gets a lot more fun. The final battle sequence is ferocious and thrilling, and Richard’s swift death is staged with an appropriately brutal abruptness.

That abruptness comes from the text, and it’s just as brilliant an idea today as when Shakespeare wrote it. This cruel, murderous figure whose relentless fight for power we’ve followed so closely is, suddenly, gone–just like that, with no ceremony to it at all. A new leader steps forward, promising better times. The cycle goes on.

Richard III
Shakespeare in the Park, at The Delacorte Theater in Central Park
Through July 17, 2022