Top Posts
‘Company’ to Hit the Road on North American...
Meet the Full Cast of ‘Shucked,’ Coming to...
Full Cast for ‘Parade’ Announced
Stephen McKinley Henderson Gives the Performance of His...
The McKittrick Hotel Announces the Return of ‘The...
Broadway Stars Honored with Academy Award Nominations
Taylor Trensch, Danny Wolohan, and More Join the...
A Gay Road Trip Comes to The Brick...
Maude Apatow of ‘Euphoria’ is the Next Audrey...
Tony Award Winners to Star in ‘Hercules’ at...
Home Beyond Broadway A New(ish) Argentina: New York City Center’s ‘Evita’
Beyond BroadwayReviews 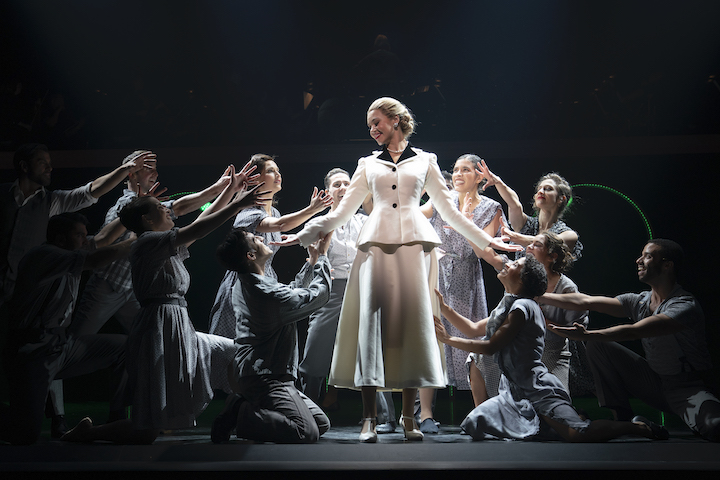 Solea Pfeiffer and the company of ‘Evita.’ (Photo: Joan Marcus)

Director Sammi Cannold begins her New York City Center revival of Evita with a voiceover explaining that the words that reverberated over radio waves announcing the first lady of Argentina’s death in 1952 were first spoken by her nurse, María Eugenia Alvarez. Fans of Tim Rice and Andrew Lloyd Webber’s pop opera will see a thorough and proficient production, with other adjustments made to capture the historical accuracy of the life of María Eva Duarte de Perón. But does this Evita capture the fire of a country on the brink of a revolution?

Cannold has also cast two actresses as Eva. Maia Reficco plays young Eva, the teenager who allegedly first met tango singer Agustín Magaldi when she was 15. More recent biographies have indicated numerous sexual assaults against Eva in her teen years, which Cannold has woven into the production’s visual narrative with the assistance of co-choreographers Emily Maltby and Valeria Solomonoff. Solea Pfeiffer steps into the role shortly into the first act as Young Eva continues to haunt the production in ways that sometimes feel forced and at others impactful. 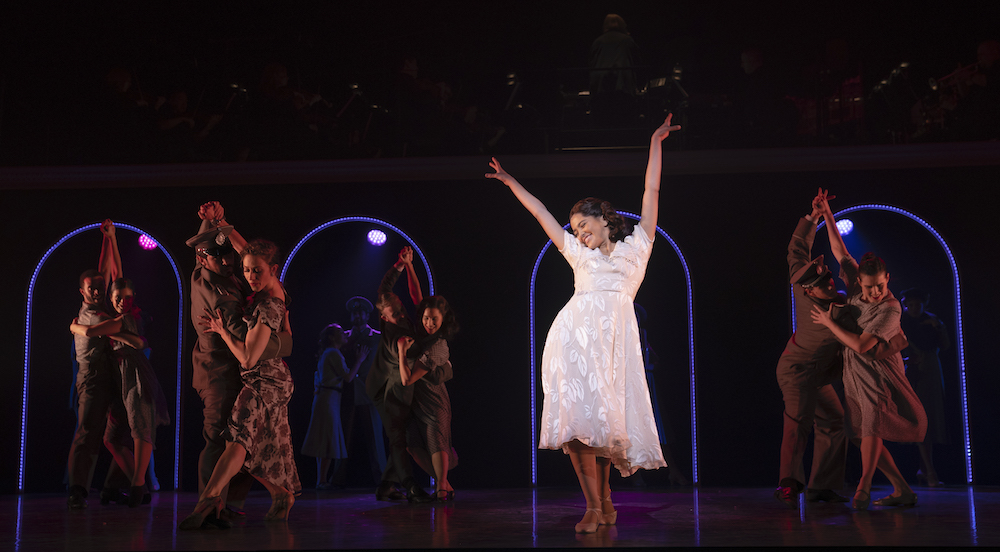 Maia Reficco and the company of ‘Evita.’ (Photo: Joan Marcus)

In “Another Suitcase in Another Hall” (beautifully sung by Maria Cristina Slye as Perón’s mistress), Eva dismisses a young girl to take her place alongside the rising Juan Perón, but the presence of her younger self reinforces the idea that Eva, too, had at one point been cast aside.

Those not fully informed of Argentinian history have revolutionary narrator Che (Jason Gotay, Renascence) to frame the story as Eva transforms from a teen finding her way on the streets of Buenos Aires to the driving force behind one of the country’s most powerful couple of the 20th century. Eva’s sights were set on the vice presidency, but her declining health and eventual diagnosis of cervical cancer ultimately hindered those aspirations.

Millions of Argentinians poured into the streets to mourn her passing, the ornate ceremony marked by thousands of flowers, here dramatically referenced by Jason Sherwood’s scenic design. There’s plenty of room for the 27-member cast, who pay homage in various forms to the Argentinian tango. 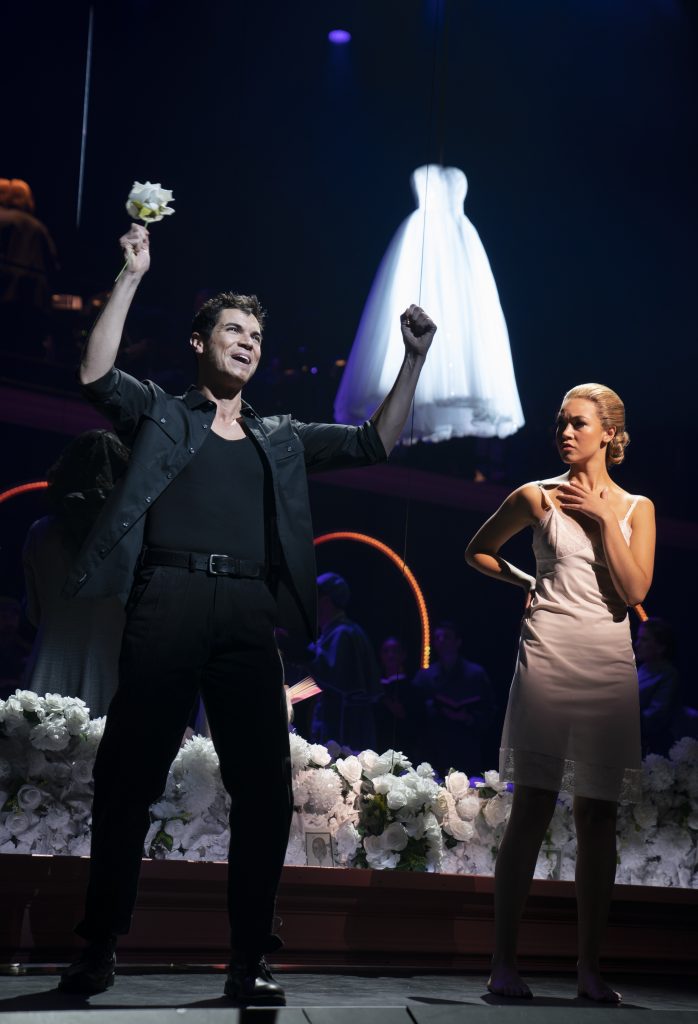 But Evita is ultimately about its trifecta of stars: Eva, Che and Perón. In the dual performance of the title role, Cannold sacrifices stage experience for historical accuracy. Under Kristen Blodgette’s musical direction, Reficco seems to be chasing Webber’s challenging score, never quite finding the pocket in Eva’s breakout “Buenos Aires.” Pfeiffer (who wowed audiences in Encores! Off-Center production of Songs for a New World) exhibits smart restraint and judiciously unleashes her wide-ranging vocal power. Those vast flowers descend for Evita’s most famous number, “Don’t Cry For Me Argentina,” and Pfeiffer doesn’t disappoint, but it is the lesser-known “You Must Love Me” that captures the depth of her emotional performance.

Enrique Acevedo’s charismatic Perón can’t quite match the spotlight of his first lady, but Gotay’s fiery Che brings the hunger that Evita demands. More freshly scrubbed than the real Guevara, who may have inspired the character’s creation, Gotay nevertheless exudes the power and intelligence to drive Evita forward.

With an abbreviated rehearsal period, this Evita oftentimes feels academic rather than electrifying in spite of some stand-out moments and performances, proving a revolution—even of the musical theater variety—is not without its casualties.