Top Posts
‘Company’ to Hit the Road on North American...
Meet the Full Cast of ‘Shucked,’ Coming to...
Full Cast for ‘Parade’ Announced
Stephen McKinley Henderson Gives the Performance of His...
The McKittrick Hotel Announces the Return of ‘The...
Broadway Stars Honored with Academy Award Nominations
Taylor Trensch, Danny Wolohan, and More Join the...
A Gay Road Trip Comes to The Brick...
Maude Apatow of ‘Euphoria’ is the Next Audrey...
Tony Award Winners to Star in ‘Hercules’ at...
Home Reviews In ‘A Soldier’s Play,’ a Full-Throttle Revival Reveals the Complexities of Racism
Reviews 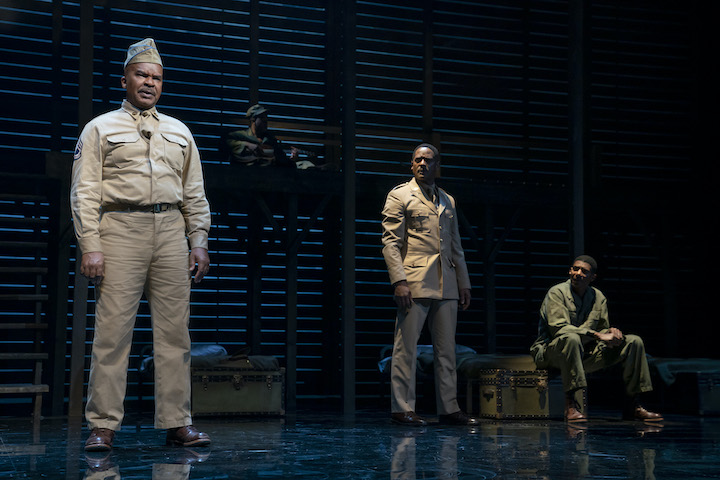 Roundabout Theatre Company confirms that Charles Fuller’s A Soldier’s Play is as relevant as when New York City’s Negro Ensemble Company premiered the Pulitzer Prize-winning drama in 1981. Now receiving a stellar revival helmed by director Kenny Leon, Fuller’s work reminds audiences of the insidious power of racism and its ability to permeate communities from within.

Set on a Louisiana army base circa 1944, a black sergeant is murdered. While initial suspicion points fingers at local Klansmen, further investigation reveals a suspicious dynamic among the sergeant and the men of Company B.

“A play means nothing on a page,” Fuller once humbly said. “A play is nothing until people do it.” The prolific playwright’s commentary, while partially true, doesn’t give credit to his masterful work that slowly builds suspense through an examination of the crime, which plays out in a fluid volley of linear storytelling and flashbacks.

Derek McLane’s thoughtful set design, a towering structure of wood boards and beams with enough flexibility to seamlessly contain the action, along with the return of the play’s original lighting designer Allan Lee Hughes, who captures Louisiana’s heat and humidity as well as confining the swiftly moving action through sharpness and shadows, contribute to a cohesive, creative team that lifts Fuller’s play off the page.

The murder of Sergeant Vernon C. Waters (David Alan Grier) comes under investigation by company captain Charles Taylor (Jerry O’Connell) and outside legal counsel, Captain Richard Davenport (Blair Underwood). Their findings reveal Waters’ disconcerting obsession with the perception of the black community, which results in deadly consequences beyond his own demise.

We don’t have to look too far to find parallels with Fuller’s characterization. Hitler’s obsession with what he defined as the Aryan race was a far cry from what he saw in the mirror. Roy Cohn, to his dying day, denied that he was gay in spite of a lifetime of male sex partners. The festering of self-hate and insecurity has rippled throughout history. But Fuller’s specificity is what makes A Soldier’s Play so compelling.

“Do you know the damage one ignorant Negro can do?” asks Waters in a chilling monologue. “My daddy told me, we got to turn our backs on his kind… Close our ranks to the chittlin’s, the collard greens—the corn-bread style. We are men—soldiers, and I don’t intend to have our race cheated out of its place of honor and respect in this war.”

Grier, known by television audiences for his comedic work on In Living Color but with an impressive roster of dramatic credits in film, television and on stage, delivers a powder keg performance that ignites the entire acting ensemble. As the black lawyer brought in to investigate the case, Underwood brings a dulcet-toned assurance to the role, with the rest of the ensemble following suit with sharp, emotionally resonant performances. 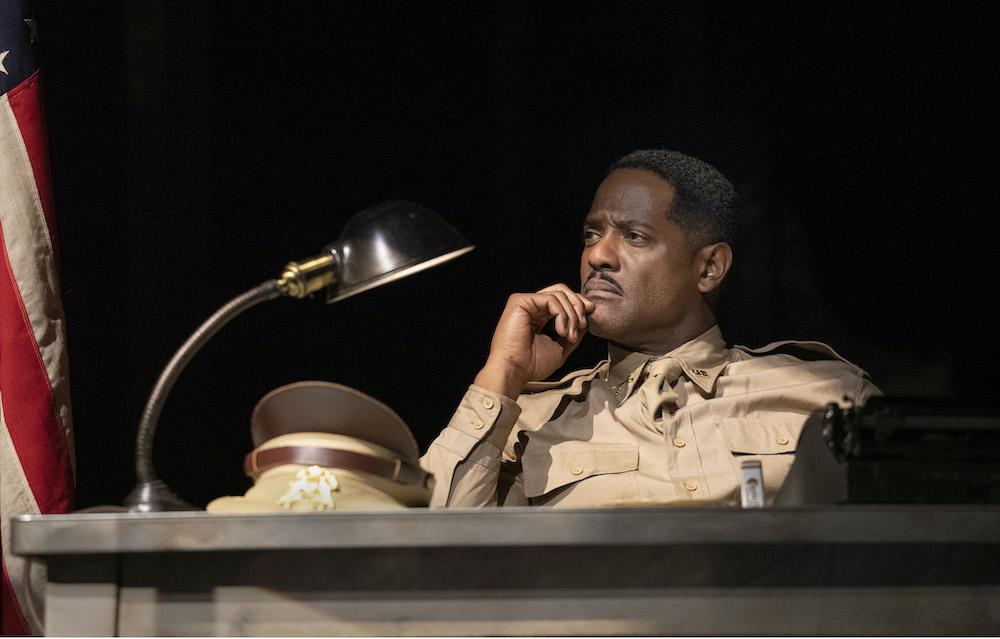 It’s clear that Leon understands the world of Fuller’s play, and moves the cast through its paces with precision. The play breathes and halts in ways that both arrest and captivate.

“Run to the things that scare you,” said Underwood in an interview with the Roundabout’s education dramaturg Ted Sod when asked what advice he’d give to young actors. I’d say the same to theatergoers who might not typically gravitate toward this type of work. A Soldier’s Play is worth the sprint.