Contributor Scott Redman heads to Queens for a technology-driven theater experience. Was it worth the subway ride or should he have live-streamed the performance instead? The WiredArts Fest currently running through March 2 is billed as the first live-streamed performing arts festival. The event is promoting a 21st century approach to watching, enjoying and interacting with live performances. This includes smartphone apps in lieu of printed programs and encouraging texting and social media postings during the performance. So no Patti LuPone outbursts are expected. Included in the lineup is an encore performance of Die: Roll to Proceed, which enjoyed an earlier run at LaMama that was greeted with enthusiastic response.

Imagine a life where every decision you needed to make was already outlined by six unassuming sides of a die. What to wear? What to eat? Who to date?

Die: Roll to Proceed boasts itself as an existential comedy framed by two 30-somethings, George and Rob, lying around in their underwear unable to navigate life’s constant grind. Most of their dilemmas revolve around a girl or overdue rent.

The young men resort to a simple device of rolling a six-sided die when they reach a crossroads. The plot twists and turns depending on the number. To add an extra layer of mayhem, an audience member is chosen throughout the adventure to roll the die. A Master of Ceremonies guides the romp and scene transitions with oddball humor by inserting scrotum jokes.

The loose madcap-style comedy seems light at first glance but contains an edge beneath the surface. The play, written by Joe Kurtz and directed by Christian De Gré, poses relevant questions behind decision making in the ever-changing technology world, though the script frequently turns to “poop humor” for laughs and becomes less absurd after the fourth reference. A special kudos must be given to the cast who has memorized more than 240 different scenarios.

If you’re willing to trek out to Queens, the roll of the dice is worth the trip — or watch the show streamed live from the comfort of your couch. Day passes are available for $2.50, which provide streaming access to all performances within a 24-hour period. 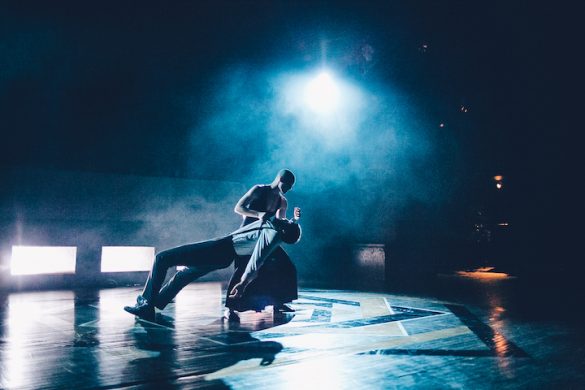