Top Posts
‘Company’ to Hit the Road on North American...
Meet the Full Cast of ‘Shucked,’ Coming to...
Full Cast for ‘Parade’ Announced
Stephen McKinley Henderson Gives the Performance of His...
The McKittrick Hotel Announces the Return of ‘The...
Broadway Stars Honored with Academy Award Nominations
Taylor Trensch, Danny Wolohan, and More Join the...
A Gay Road Trip Comes to The Brick...
Maude Apatow of ‘Euphoria’ is the Next Audrey...
Tony Award Winners to Star in ‘Hercules’ at...
Home Beyond Broadway Three’s Company, Or Is It? ‘Afterglow’ at Pride Film & Plays
Beyond BroadwayReviews 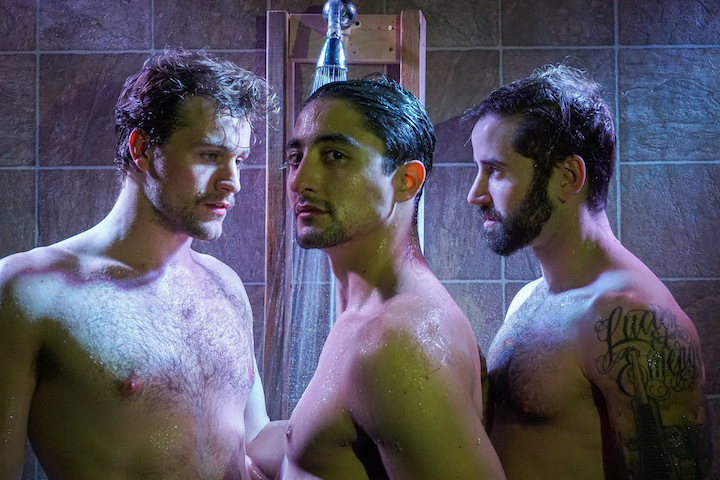 Pride Film & Plays has issued an “AUDIENCE ADVISORY” across its promotional channels for their current production of S. Asher Gelman’s Afterglow, and while the stark nudity of the male persuasion brings an immediate novelty to the Windy City theater scene, a red flag might also want to be raised for one of its lead performances.

Mr. Gelman’s 2017 Off-Broadway hit delivers a rather common romantic cautionary tale, arising from a sexually titillating setup. Polyamory (having intimate relationships with more than one partner) underpins a plot revolving around appetites, emotional maturity and the complexities of modern fidelity. The playwright, however, inverts the typical trajectory of a three-way, love-gone-wrong story, starting with what might normally be the end game.

As the curtain lifts, married lovers and expectant parents Alex (Jacob Barnes) and Josh (Rich Holton) are comfortable with their open relationship. Weekend trick Darius (Jesse James Montoya) is just another fling… until he isn’t. The three characters enjoy mutual pleasure and an unspoken understanding that the intimacy ends when the evening does. But the rapacious Josh decides he wants more.

It’s easy to view Josh, a successful stage actor and primary source of financial support for all three men, as an entitled child deferring adulthood. Yet I suspect that in the hands of a more nuanced performer, he’d be more complex than flopping hair and whiny pleading for unearned empathy. The character’s crisis of commitment and responsibility is 10 years ahead of schedule, yet Mr. Holton’s interpretation looks backward. I found myself hoping that Alex and Darius would fall in love and leave Josh behind. Mr. Holton’s rendering of the lead — chiseled glutes aside — is simply too grating to yield any level of devotion and forgiveness.

Instead, days after last week’s opening, it is Jacob Barnes’ Alex to which my thoughts keep returning. Making his Chicago storefront debut while largely in the buff, Mr. Barnes turns in a solid performance as a graduate student in search of the personal life stability that mirrors his predictable scientific career. It takes little effort for audiences to identify with the emotional work Alex defers in the lab by day and is too exhausted to perform by night. Initially relieved by his husband’s evening extracurricular activities, acknowledging that Josh needs more attention than he can reasonably give, Mr. Barnes shows us the character’s gradual shift in correlation with the growing pile of Josh’s lies. His Alex is naïve, lustfully lazy and flawed — but likable.

Jesse James Montoya also gives Pride audiences more than his angled beauty and manscaped genitalia. Sparing Darius from run-of-the-mill twinkdom, his performance lends credulity to the character’s attractive, misguided Pollyannaism. A decade younger than his sexual partners and smitten with Josh’s artistry and unavailability, we have all been Darius, imagining a real future with an exciting bad boy who will only leave us hurting. Of the three characters, it is the youthful massage therapist who first decides to disengage from the trio’s emotional death spiral, physically removing himself from the entangled mess. 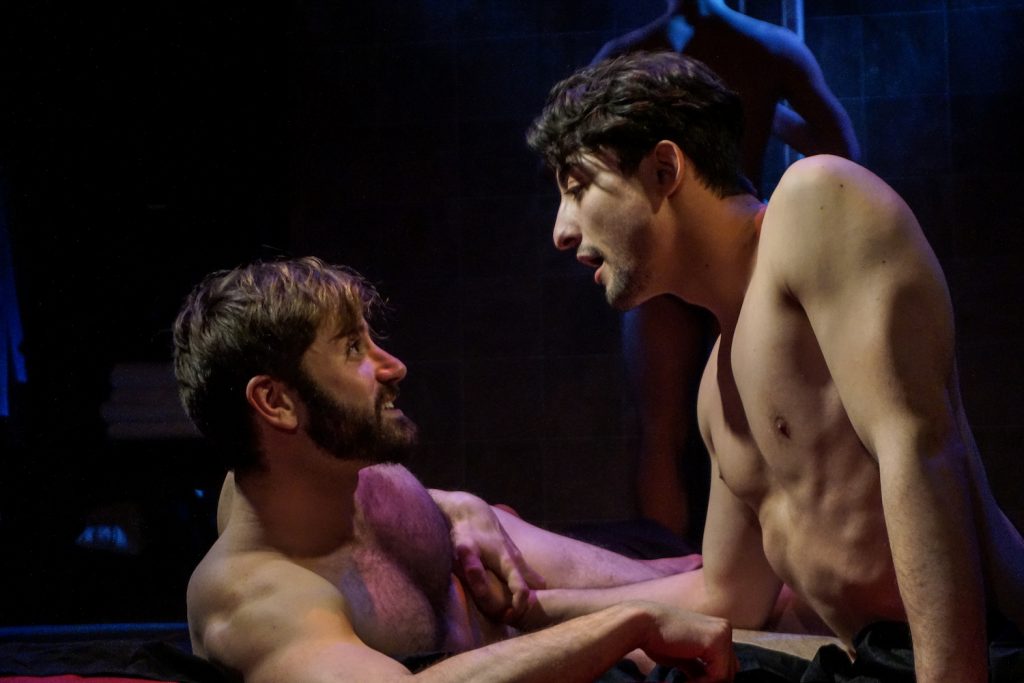 Still, it’s Mr. Barnes’ Alex who seems most changed by the play’s ending. The character comes to an offstage understanding that neat edges in a relationship are impossible, particularly with Josh. Both he and those watching are left with frustrated, resigned fatigue after 85 minutes of psychological warfare. As the actor exits stage right, Mr. Barnes face wears the uncertainty of his character’s return to the life he thought he understood.

Ultimately, Director David G. Zak is unable to harness Mr. Holton’s off-putting performance, making Afterglow a three-way that might be better served as a party for two.