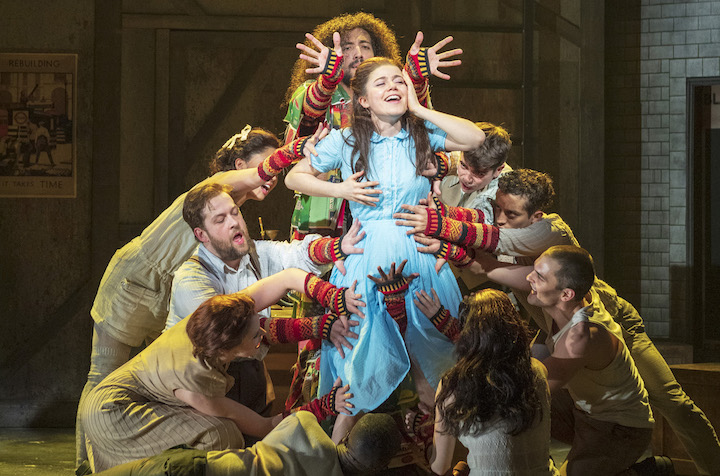 In today’s tumultuous political climate, Wonderland would be a bliss escape. You can understand the appeal: absurdist fantasies, tea parties, croquet, and doesn’t the Red Queen remind you of someone, with that blind, unbridled rage? Oh, wait. Maybe it’s not such an escape after all. Nor is Alice by Heart, a new musical now running at MCC Theatre‘s new space in midtown Manhattan.

The new musical features a score by Spring Awakening duo Duncan Sheik (music) and Steven Sater (lyrics and book), co-written with Jessie Nelson, who also directs. But an attempt to melt into the folds of imagination falls short of reality and is rebuked by logic, and therein lies the most significant issue with the musical itself.

Alice Spencer (Molly Gordon), a young girl in that familiar blue dress, becomes distraught when her close friend, Alfred (Colton Ryan), is brought to the Underground station-turned-bomb shelter during World War II’s London Blitz. Alfred, suffering from tuberculosis, has little time left to live. Frantically, Alice seeks to distract them both from his pain by reading Lewis Carroll’s Alice in Wonderland. Seeing it as an inappropriate children’s book, a Red Cross nurse (a wonderful Grace McLean), tears the novel from Alice’s hands, leaving the girl to recount the story from memory. 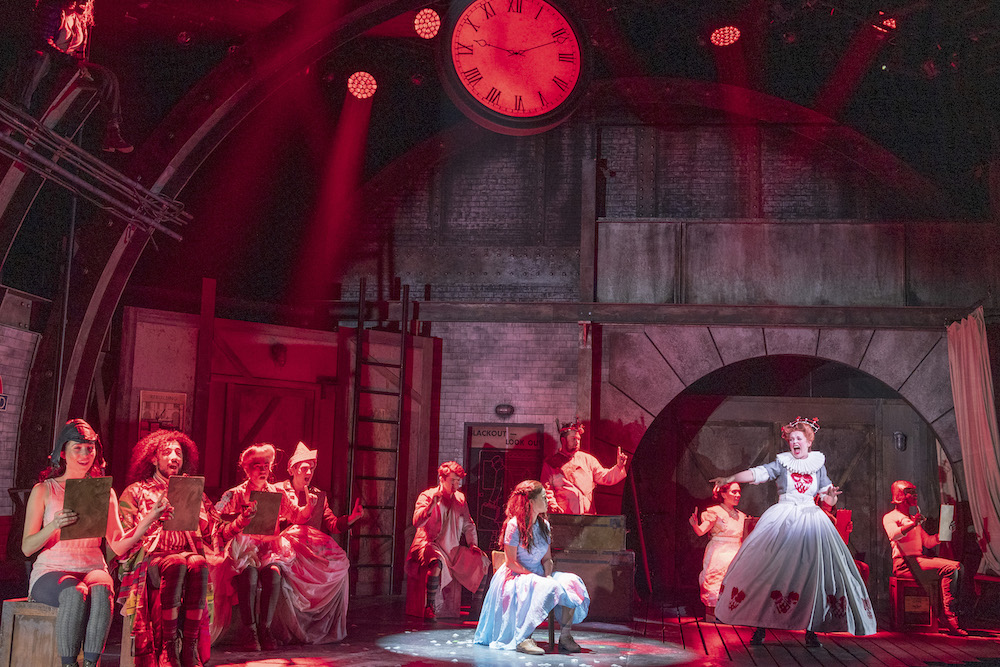 The real-life circumstances easily connect with their Wonderlandian counterparts, but Alice by Heart hammers the comparisons over our heads. We never forget that Alfred, like the White Rabbit, has little time left, because that’s mostly all he talks about. Nelson’s direction, which extracts strong emotions but often at high-decibel levels, ultimately falls flat in spite of a limber and dextrous ensemble.

While a string of themes ties itself into a knot, the audience must work to untangle how each is related: Alice and Alfred’s friendship provide a framework for the musical’s structure, but individual numbers have little to do with one another. We see similarities between Alice growing taller and smaller in the book, and Alice Spencer’s body going through more permanent changes in life, as discussed by Nelson in an earlier interview. It’s a compelling allusion and commentary regarding the transformation from girl to young woman, but it gets lost among the other metaphors and loses its gravity. One moment mocks Alice’s inability to remember the book as clearly as she would have liked, another scene invites her to get high, while still another explores depression and trauma. The comparisons are apt but create too many puzzle pieces.

The cast of characters is as compelling as the inspiration from which it’s drawn. Brought to beautiful life by Rick and Jeff Kuperman’s choreography (the many-armed caterpillar is a delight) and Paloma Young’s eye-catching costumes, Carroll’s creatures woo, confuse, entrance and even degrade Alice. But like Alice, the audience may also find itself a bit lost (in spite of terrific performances, including Wesley Taylor’s Mad Hatter and Noah Galvin’s Duchess).

Confronted by things she does not understand, changes she cannot stop, and plot points that leave the rest of us in a twist, Alice finds herself in absolute chaos during the Red Queen’s trial. It’s a strange but compelling scene, as though Wonderland’s characters have taken over their narrative, practically angry with Alice for using it as an escape mechanism. The Red Queen finally has her moment, a delicious waterfall of outrage for which we waited too long, and it’s almost a relief to see the characters fight back against their senseless portrayal.

“We fell and never found the center,” Alice sings — a hole Sater and Nelson seemingly fell down as well. Alice in Wonderland‘s nonsensical structure, rich and odd, lends little plot to hold onto in Alice by Heart. And though the rabbit hole twists and wavers at many points, it never ends up where you hoped it would.