Top Posts
‘The Phantom of the Opera’ Delays Broadway Closing...
A Christmas Guide to New York Theater
Ingrid Michaelson Rings in the Holidays for Two...
Review: ‘& Juliet’ Is A Daffy, Absurdly Joyous...
Jinkx Monsoon & BenDeLaCreme’s ‘The Jinkx & DeLa...
Review: Victoria Clark Shines in the Refreshingly Original...
Review: Mike Birbiglia Astounds in ‘The Old Man...
A Sondheim Stocking Stuffer: New Book Offers Insightful...
From ‘Tattooed Lady’ to ‘KPOP,’ Plus A Quick...
Museum of Broadway Will Open Its Doors November...
Home Beyond Broadway Alice Ripley to Reprise Role in Immersive ‘Next to Normal’
Beyond BroadwayBuzz 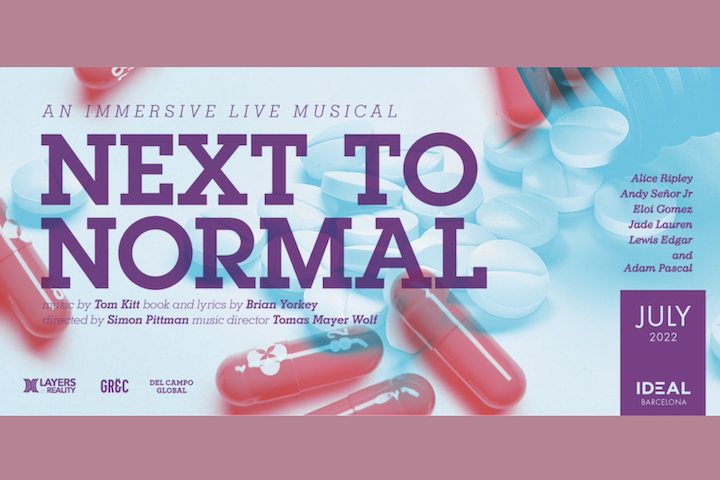 Artwork for the Festival Grec de Barcelona production of ‘Next to Normal.’ (Image provided by Jorgensen PR)

She won a Tony Award for her performance as Diana in Next to Normal. And now, Alice Ripley returns to the role in a new, live immersive musical theater format. This July, producers Pablo del Campo and Jordi Sellas will present the worldwide premiere at the Festival Grec de Barcelona.

This production will be the first Broadway show to be presented in this new, 60-minute, disruptive, 100% immersive, live musical theater format. With no sets or props, Next to Normal will play a 20,000 square-foot venue, utilizing a surround-sound system and 360-degree projections to create an immersive experience that places the audience alongside the actors.

Directed by Simon Pittman (RSC, National Theatre, Frantic Assembly), this immersive live musical theater production of Next to Normal has been recognized by the show’s Pulitzer and Tony-winning writers Tom Kitt and Brian Yorkey, with music director Tommy Mayer Wolf bringing new textures to this sophisticated score that travels from classical music to rock-and-roll.

“Tom and Brian’s beloved Next to Normal in this new perspective will make a dramatically soulful impact on the human hearts presented. Next to Normal exists to help us find the light,” said Ripley.

Next to Normal centers on a mother who struggles with worsening bipolar disorder and the effects that managing her illness has on her family. The musical opened on Broadway in April 2009. It was nominated for eleven Tony Awards that year and won three: Best Original Score, Best Orchestration, and Best Performance by a Leading Actress in a Musical for Alice Ripley. It also won the 2010 Pulitzer Prize for Drama, becoming the eighth musical in history to receive the honor.

“Tom and I couldn’t be more thrilled that the world will get to see Next to Normal in this brand-new way,” said Yorkey. “When we wrote the show, we wanted to bring the audience inside the mind of the lead character—and this incredible new immersive production makes that happen in a bold and amazing fashion.”

As part of Festival Grec de Barcelona, this world premiere of the immersive live Next to Normal will take place at IDEAL, a European incubator art center led by Executive Producer Jordi Sellas, where trendy exhibitions are created and produced for well-known artists such as Frida, Klimt or Dali, as well as emerging artists and cultural pushers.