Top Posts
‘Company’ to Hit the Road on North American...
Meet the Full Cast of ‘Shucked,’ Coming to...
Full Cast for ‘Parade’ Announced
Stephen McKinley Henderson Gives the Performance of His...
The McKittrick Hotel Announces the Return of ‘The...
Broadway Stars Honored with Academy Award Nominations
Taylor Trensch, Danny Wolohan, and More Join the...
A Gay Road Trip Comes to The Brick...
Maude Apatow of ‘Euphoria’ is the Next Audrey...
Tony Award Winners to Star in ‘Hercules’ at...
Home Beyond Broadway A Sobering Celebration of Life: ‘All That He Was’
Beyond BroadwayReviews 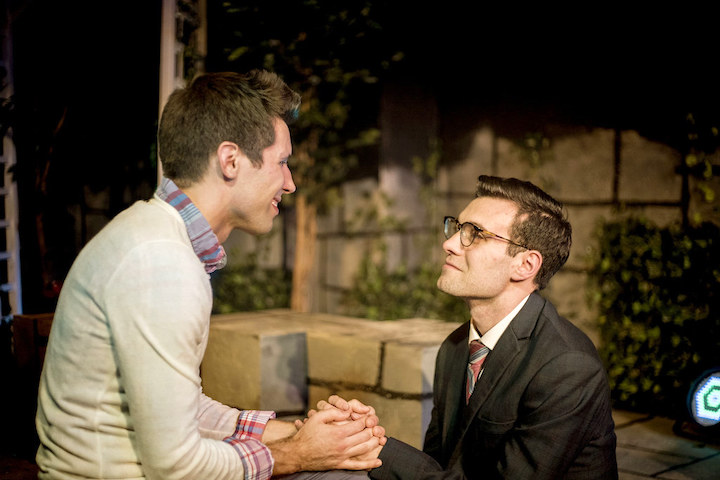 (l to r) Matthew Huston and Joe Giovannetti on ‘All That He Was.’ (Photo Nicholas Swatz)

Funerals are never easy, especially when the griever has a complex relationship with the deceased. (Which is the case, more often than not.) But what if the deceased can witness their own funeral, à là Tom Sawyer and Huck Finn? What if it’s 1992 and the deceased is a gay man who died of AIDS, and his lover, former girlfriend and immediate family are all in one place? In a new version of his award-winning musical, Larry Todd Cousineau directs All That He Was, taking us back in time to one of many funerals at the height of the AIDS crisis. Pride Films and Plays’ production is a beautifully executed rumination on the fleeting, precious nature of life.

“Thank you for coming to my funeral,” The Man (Matthew Huston) tells us, the crowd of spectators and de facto mourners. He quickly narrates a childhood full of parental discord, a sister (Sarah Ruth Mikulski) who became a religious fanatic and an adored younger brother (Ethan Warren) who was never given the whole story. Though The Man stays in touch with his high school girlfriend (Brittney Brown) and finds a devoted lover (Joe Giovannetti), his life is cut short at 26 thanks to a frighteningly prevalent diagnosis. As The Man watches his memorial service unfold, he observes the complicated emotions of those around him and hopes against hope that love will conquer all.

Director Cousineau (then known as Larry Todd Johnson) and Cindy O’Connor co-wrote All That He Was as graduate school classmates. The musical toured nationally in the 90s and played in Los Angeles and at Washington, D.C.’s Kennedy Center. This production was specifically retooled for Pride Arts Center with new music and a modified script.

Cousineau and O’Connor made the intelligent decision to keep the story set in 1992 when AIDS was rampant and understanding of gay relationships was not where it is today. The Man leaves home as a teenager, deeply hurts his sweet but clueless prom date and endures frustrating drug trials as an HIV-positive patient. The musical occasionally dips into cliché (especially with the character of The Man’s stoic blowhard father), but All That He Was sensitively reminds us of how far we have come in terms of acceptance — and how far we still have to go. 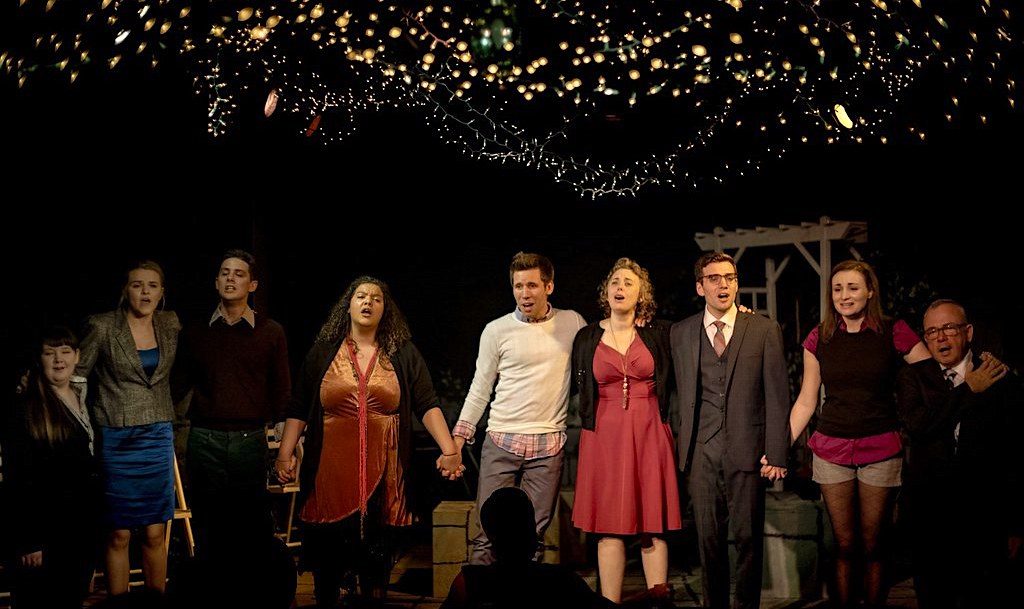 The cast of ‘All That He Was.’ (Photo: Nicholas Swatz.)

At 100 intermission-less minutes, All That He Was still feels just a bit too long. At least one character and a song could have been cut without lessening the production’s emotional impact. Do we need a solo from The Man’s jaded, exhausted physician (Alanna Kalbfleisch)? Moreover, a Bible quote-down between The Man’s sister and his outspoken lesbian counselor (Colleen Perry) is entertaining but detracts from the play’s larger meaning. Extraneous material aside, O’Connor’s score is appropriately emotional with enough humor to provide giggly catharsis when necessary.

The strongest aspect of All That He Was is its stellar cast. Huston is a relatable narrator, gently guiding us through the ups and downs of his short existence, and creates loving, believable chemistry with Giovannetti in the touching duet “Our First Christmas.” Warren’s little brother is a perfect blend of frustrated teenage angst. He’s attending the funeral against his parents’ wishes with a wide-eyed resolve to be better in ways he doesn’t quite yet know how. In a gifted ensemble, Brown is the standout. Fresh off a triumphant turn as Yitzhak in Theo Ubique’s Hedwig and the Angry Inch, she brings a darkly funny self-awareness to what could have been a tired stereotype. Because ex-girlfriends who still carry a torch for their gay best friends are everywhere, and just like the men they mourn, these women deserve a little dignity.

All that He Was
Pride Film & Plays
Pride Arts Center
4147 N. Broadway, Chicago
Through September 8, 2019