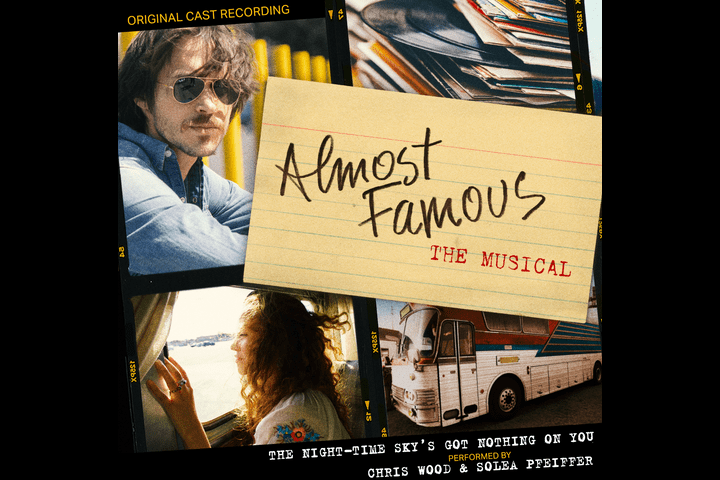 Sony Masterworks Broadway, along with producers Lia Vollack and Michael Cassel, released the single “The Night-Time Sky’s Got Nothing on You” from Almost Famous – Original Cast Recording. The song, performed by Chris Wood and Solea Pfeiffer, features music by Tom Kitt with lyrics by Cameron Crowe and Tom Kitt.

Almost Famous will begin preview performances at the Bernard B. Jacobs Theatre in New York City October 3, 2022 with opening night set for November 3, 2022. The new track is now streaming here.

“The Night-Time Sky’s Got Nothing on You” is the second track to be made available from the forthcoming Original Cast Recording of Almost Famous, following the recent release of “Everybody’s Coming Together.” Produced by Scott Riesett and Tom Kitt, the song was recorded at Sear Sound, New York City and Igloo Music, Burbank.

Sony Masterworks Broadway will release the complete Original Cast Recording of Almost Famous, with pre-order in all formats (CD, Vinyl LP and digital service providers) to be announced at a later date.

The year is 1973 and it’s all happening. Led Zeppelin is king, Richard Nixon is President, and idealistic 15-year-old William Miller is an aspiring music journalist. When Rolling Stone magazine hires him to go on the road with an up-and-coming band, William is thrust into the rock-and-roll circus, where his love of music, his longing for friendship, and his integrity as a writer collide. Almost Famous is a spirited tale of fandom, family, and the unforgettable characters you’ll meet along the way. Turn it up!

Tickets for Almost Famous on Broadway are currently on-sale via telecharge.com or calling 800 447 7400.