Top Posts
‘Company’ to Hit the Road on North American...
Meet the Full Cast of ‘Shucked,’ Coming to...
Full Cast for ‘Parade’ Announced
Stephen McKinley Henderson Gives the Performance of His...
The McKittrick Hotel Announces the Return of ‘The...
Broadway Stars Honored with Academy Award Nominations
Taylor Trensch, Danny Wolohan, and More Join the...
A Gay Road Trip Comes to The Brick...
Maude Apatow of ‘Euphoria’ is the Next Audrey...
Tony Award Winners to Star in ‘Hercules’ at...
Home Show Folk Last Chance: Amber Gray to Depart ‘Hadestown’ Feb. 19
Show Folk 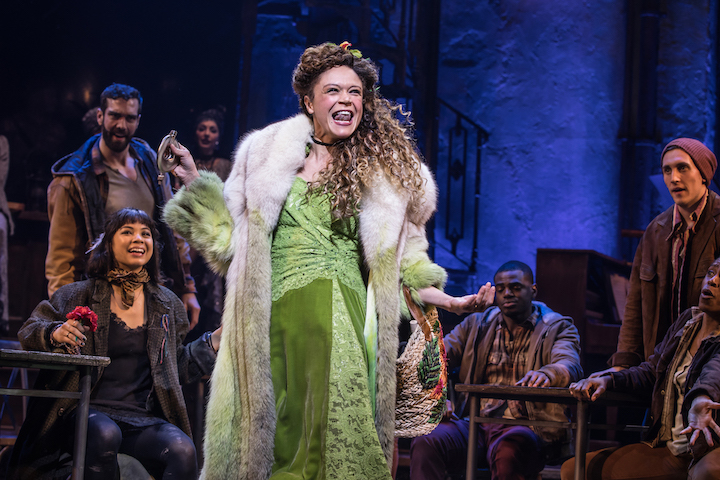 There is nobody as intimately familiar with Hadestown (except its creator Anaïs Mitchell) as Amber Gray, who originated the role of Persephone in Hadestown, the Tony Award-winning Best New Musical. Gray will play her final performance at the Walter Kerr Theatre (219 West 48th Street) on Saturday evening, February 19. Casting for the role of Persephone will be announced shortly.

Gray’s involvement in Mitchell’s beguiling musical began during early developmental readings with Tony Award-winning director Rachel Chavkin. She went on to play the role of the Queen of the Underworld in all three developmental productions before Hadestown’s 2019 Broadway premiere: New York Theatre Workshop (2016); the Citadel Theatre in Edmonton, Canada (2017); and London’s National Theatre (2018). For her performance, she received a Grammy Award, an Outer Critics Circle Award, and was nominated for Tony and Lucille Lortel Awards.

In The Broadway Blog’s original review of the production, critic Matthew Wexler described Gray as “a total knockout. Confined to the underworld then periodically released above, her Persephone is what we might today call a centrist (with a flask at the ready), able to tap into compassion and empathy for Hades as well as the young lovers attempting an escape from his domain. With echoes of a young, unabashed Eartha Kitt, it’s virtually impossible to take your eyes off her.”

The show originated as Mitchell’s indie theater project that toured Vermont, which she then turned into an acclaimed album. With Chavkin, her artistic collaborator, Hadestown has been transformed into a genre-defying new musical that blends modern American folk music with New Orleans-inspired jazz to reimagine a sweeping, ancient tale.

Following two intertwining love stories — that of young dreamers Orpheus and Eurydice and that of King Hades and his wife Persephone — Hadestown invites audiences on a hell-raising journey to the underworld and back. Mitchell’s beguiling melodies and Chavkin’s poetic imagination pit industry against nature, doubt against faith and fear against love. Performed by a vibrant ensemble of actors, dancers, and singers, Hadestown delivers a deeply resonant and defiantly hopeful theatrical experience.

Hadestown is the most honored show of the 2018-2019 season. In addition to the show’s eight Tony Awards, it has been honored with four Drama Desk Awards, six Outer Critics Circle Awards, including Outstanding New Broadway Musical and the Drama League Award for Outstanding Production of a Musical. The show is already the highest-grossing musical in the history of the Walter Kerr Theatre (219 West 48th Street).