Top Posts
‘Company’ to Hit the Road on North American...
Meet the Full Cast of ‘Shucked,’ Coming to...
Full Cast for ‘Parade’ Announced
Stephen McKinley Henderson Gives the Performance of His...
The McKittrick Hotel Announces the Return of ‘The...
Broadway Stars Honored with Academy Award Nominations
Taylor Trensch, Danny Wolohan, and More Join the...
A Gay Road Trip Comes to The Brick...
Maude Apatow of ‘Euphoria’ is the Next Audrey...
Tony Award Winners to Star in ‘Hercules’ at...
Home Beyond Broadway Review: For Better or Worse, ‘Assassins’ Makes for a Timely Revival
Beyond BroadwayReviews 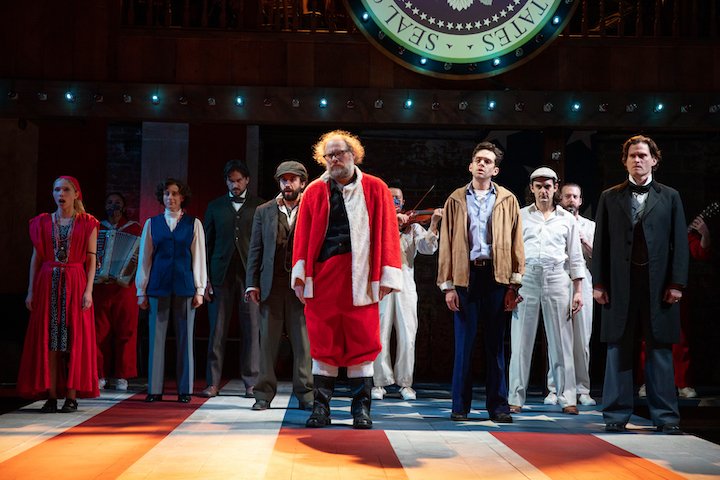 The set for John Doyle’s production of Stephen Sondheim and John Weidman’s controversial but nonetheless loved musical Assassins is an American flag. It’s a straightforward choice for a strange show, one that’s more revue than musical, and its presence seems to offer two interpretations: it’s the flag the characters trample on and the hearty roots beneath them that provide inspiration for their murderous schemes.

Those characters are a nonet of assassins or those who failed to achieve that status. In the Classic Stage Company revival, they’re played by a potpourri of musical theater talent (Judy Kuhn, Steven Pasquale, Will Swenson, and Ethan Slater are just some of the superstars) in a production that feels simultaneously heavy-handed and on target. Seeing the show last week, I found the final image—clips from the January 6 insurrection—too on the nose. We get it; these killers—all white and entitled, thinking they can get away with such crimes or are in the right to pursue them—feel that their horrific act is in the name of some grandeur. But then, when Kyle Rittenhouse, who killed two people when he crossed state lines and wreaked violently interrupted Black Lives Matter protesters, was acquitted for his crimes just a few days ago, I thought maybe subtlety was never an option when staging this musical. And given Sondheim’s recent passing, it’s even harder now to interrogate his works without understanding their timelessness—and timeliness.

That explains the set, but the costumes are similarly one-note, or rather, trichromatic. The band (onstage led by a perky and clear-voiced Ethan Slater as the Balladeer) also wears red, white, and blue jumpsuits. However, as John Wilkes Booth, Pasquale (The Bridges of Madison County) stands out in more ways than one: he wears a black period costume and is also one of the most commanding on the stage.

With his piercing baritone and steely eyes, Pasquale’s Booth seems most convinced of the need and righteousness of his horrific deed—which is not to say others assassins have to be of a similar conviction to go forth with their plot. There’s comedy in Kuhn’s (Fun Home) bumbling Sara Jane Moore and Tavi Gevinson’s Marxist devotee Lynette Fromme, who is overpowered by devotion to Charlie Manson and radical politics as she sings, “Let me drink poison, tell me to tear my heart in two” in the duet “Unworthy of Your Love.”

She sings that song opposite Adam Chanler-Berat’s John Hinckley, Jr, sadly a disappointment in a show overflowing with otherwise powerhouse singers and numbers. (Swenson’s flamboyant and crazed “Ballad of Guiteau” is a highlight.) Gevinson, fiesta and funny as Fromme, is not a singer. Fortunately, the songs don’t always steal the show; her and Kuhn’s dialogue is highly entertaining, as are passages from Andy Grotelueschen’s Samuel Byck, who tried to crash a plane into Nixon’s White House. 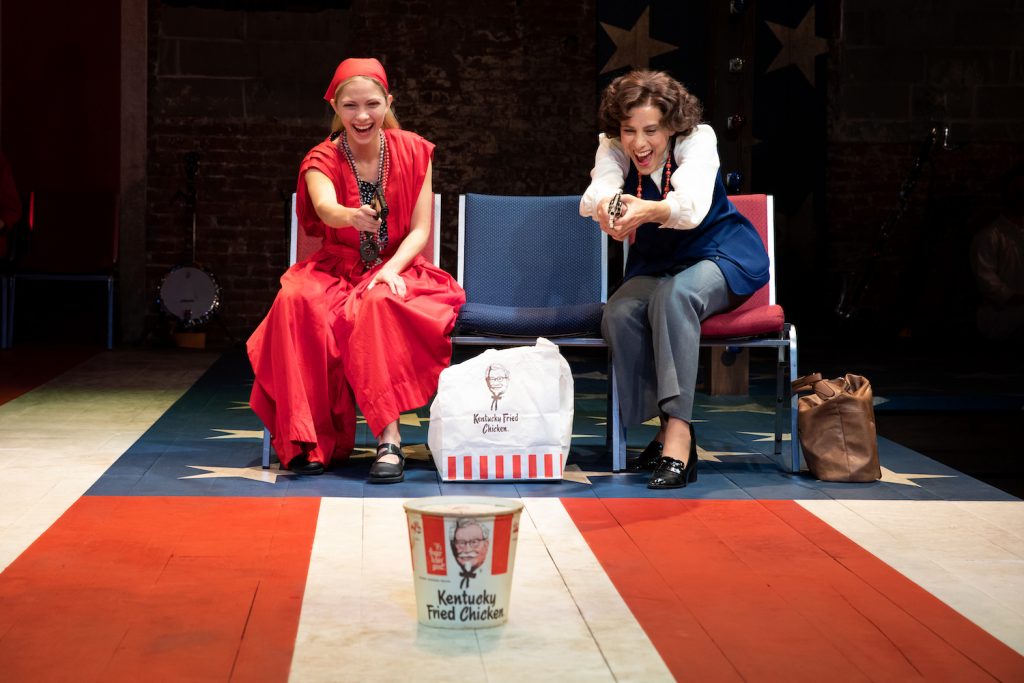 This potential act, among other insane and dangerous ploys, reminds us we’re watching a greatest hits of America’s most disturbed people, which might not be refreshing after what the past five years—heck, the past 250—have wrought in this country. The musical operates as a sound showcase of musical theater talent whenever it pops up, and also as a reminder and cautionary tale of where we’ve always been—and where we may always be going.

Billy McEntee is a freelance arts journalist living in Brooklyn.