Top Posts
‘Company’ to Hit the Road on North American...
Meet the Full Cast of ‘Shucked,’ Coming to...
Full Cast for ‘Parade’ Announced
Stephen McKinley Henderson Gives the Performance of His...
The McKittrick Hotel Announces the Return of ‘The...
Broadway Stars Honored with Academy Award Nominations
Taylor Trensch, Danny Wolohan, and More Join the...
A Gay Road Trip Comes to The Brick...
Maude Apatow of ‘Euphoria’ is the Next Audrey...
Tony Award Winners to Star in ‘Hercules’ at...
Home Hot Ticket Listen Up! Audio Plays Take Center Stage Amid Pandemic
Hot Ticket 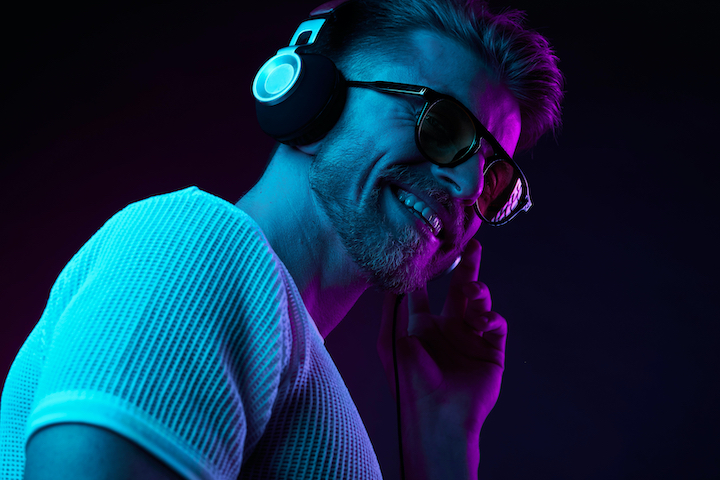 Theater makers are getting creative amid the coronavirus pandemic. While some are turning to video technology to reimagine what live performance can look like in the coming months, others are turning back to a popular art form of the 1920s. Here’s a look at upcoming audio dramas featuring some of our favorite stars. 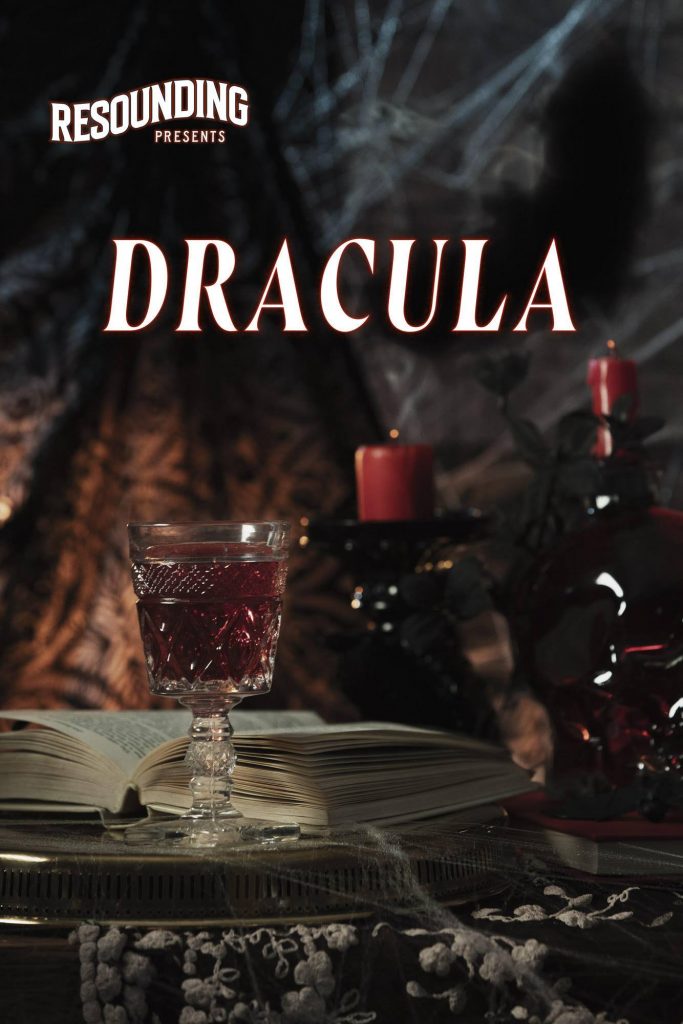 Dracula
Resounding, a live immersive audio entertainment company, debuts with a production of Dracula, based on Orson Welles’ radio play. Adapted by Resounding’s creative director Steve Wargo, the production will star Norm Lewis in the title role. The reimagined audio experience will transport audiences to the heart of Transylvania and the decaying, undead world of The Count himself.  With your ears and imagination as your guide, join Prof. Van Helsing as he leads a team of vampire hunters to destroy the evil that is Dracula once and for all.

This fast-paced new immersive audio play, suggested by Orson Welles’ 1938 radio adaptation, will use new, proprietary technology to create a live 360-degree soundscape of howls, bats, screams, creaky floors, slamming doors, and everything that goes bump in the night.

“I’ve been thinking for the better part of a decade about how to leverage the Internet to increase audience and participation in the theatre in America and the world. My initial ideas were to recreate the style and substance of the broadcasts that Orson Welles and his Mercury Theatre performed live on the radio in the late 30s. Time passed, other projects came and went, then the pandemic hit, and this idea became front and center. We have an amazing team, and now we have some fancy patent-pending new technology on our hands, something potentially revolutionary. And what better way to launch that with the great Norm Lewis as Dracula for Halloween,” says Resounding Creative Director, Steve Wargo.

Audiences will also have the opportunity to share their experiences via a “virtual photo booth” that documents the shared experience of attending the performance together, even while being apart. October 30-31 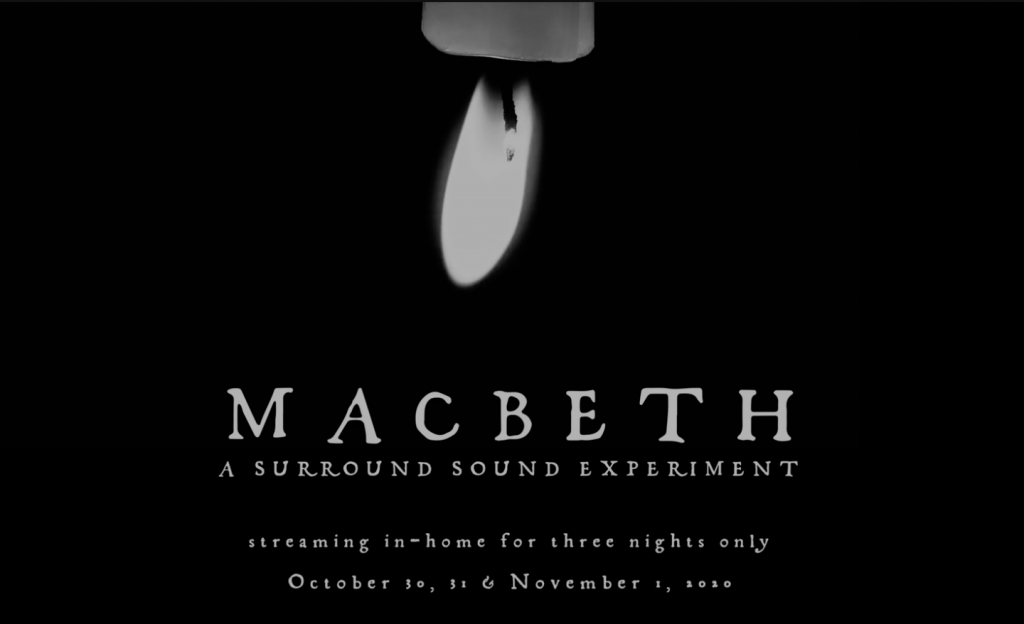 Macbeth: A Surround Sound Experiment
Shakespeare’s haunting psychological tale of raw political ambition is re-imagined as a virtual, immersive auditory experience with Macbeth: A Surround Sound Experiment. This all-new intimate 3D audio event, featuring an immersive soundscape by Will Padilla, with direction and adaptation by Joseph Discher (59E59, Barrington Stage), is designed to be listened to in the dark on a pair of headphones with a candle. Ticket-buyers will receive access to the audio performance, along with special instructions, a cocktail recipe, and accouterments that help complete the experience.

A limited batch of Premium Bundles (which include a single ticket, HausWitch “Witches” candle and McClure’s Bloody Mary Mix shipped directly to purchasers, plus a donation to The Actors Fund made in the purchaser’s name) are also available.

The production has partnered with HausWitch of Salem, MA, and McClure’s Pickles of Brooklyn/Detroit. HausWitch has made their exclusive smoke, vetiver, and spruce “Witches” candle available to listeners, and McClure’s Bloody Mary Mix is the heart of the production’s signature cocktail “The Bloody Lady,” both available for purchase separately or as part of a Premium Bundle. October 30 – November 1

Listeners can also purchase a “Dracula at Home” package, which includes Professor Van Helsing’s research, circa 1891, a map of key locations mentioned in the story, artifacts from the characters’ encounters with the Undead, and more. Through November 1

A Christmas Carol on Air
Are you worried that coronavirus will ruin your holiday cheer? San Francisco’s American Conservatory Theater says, “bah humbug.” For the first time in its 44-year history, (A.C.T.’s celebrated production of the Charles Dickens classic, A Christmas Carol, will come to life as A Christmas Carol: On Air, an enthralling radio play that the whole family can enjoy from the comfort of their home. 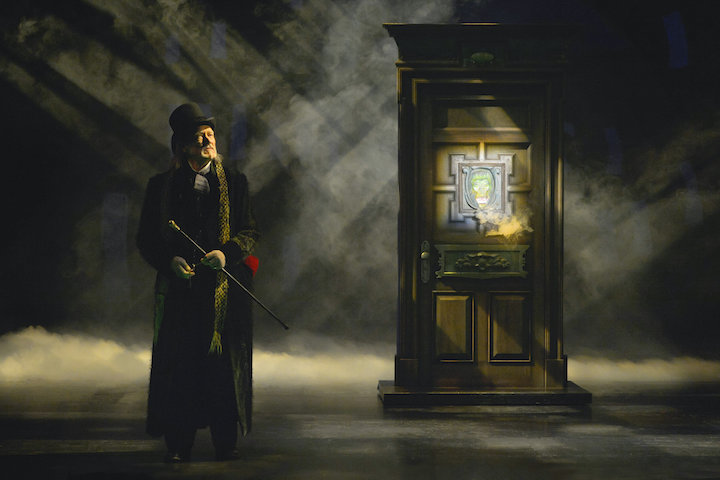 With radio adaptation and direction by Peter J. Kuo—using the original Dickens text and adaptation by Paul Walsh and Carey Perloff—this spirited and uplifting tale of reckoning and redemption will feature the delightful music, deliciously spooky ghosts and cast that have made it a cornerstone of the A.C.T. repertory and a holiday tradition for families all around the San Francisco Bay Area. December 4-31