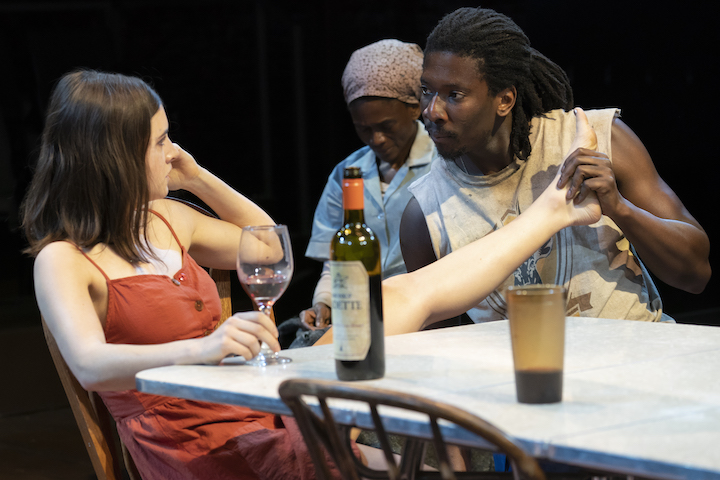 Of the three non-English-language playwrights usually recognized as the pillars of modern theatre—Ibsen, Chekhov, and Strindberg—it’s safe to say the latter is the least widely produced. When August Strindberg gets a rare New York production, more likely than not it’s Miss Julie (1888), which is part of the fair-to-middling two-play Strindberg repertory now at the Classic Stage Company. There, South African Yaël Farber’s adaptation, retitled Mies Julie, is rotating with Irish playwright Colin McPherson’s translation of The Dance of Death (written 1900; first staged 1905).

Presented under the inaccurate title of Two 19th-Century Plays by August Strindberg in Repertory, the productions’ artistic components share only the CSC’s space and the contributions of set designer David Arsenault, lighting designer Stacey Derosier, sound designer Quentin Chiappetta, and with fight and intimacy direction shared by Alicia Rodis and Claire Warden.

Like the last named, the best revivals mix comedy with the cruelty. Laughs, though, are infrequent in director Victoria Clark’s monotonous CSC revival, with its charisma-challenged cast headed by Richard Topol and Cassie Beck, supported by Christopher Innvar as Alice’s cousin, Kurt. Even with McPherson’s adaptation, no one makes The Dance of Death seem other than a boring ballet of marital hell. 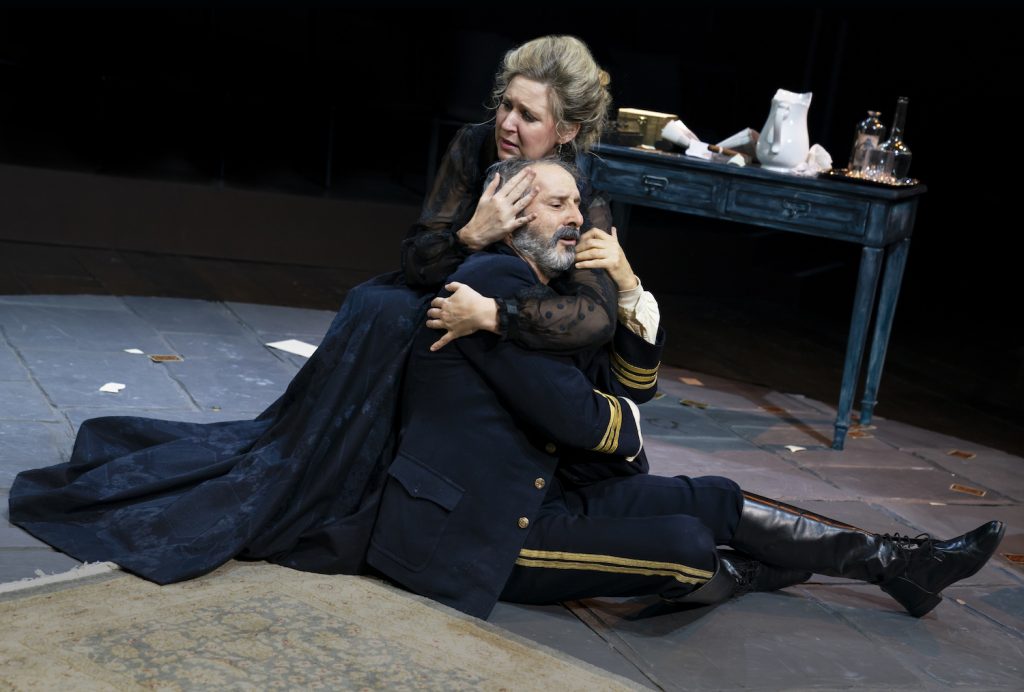 In Strindberg’s acerbic tale of conjugal dysfunction, Edgar is the commanding officer of an island fortress (once a prison). The considerably younger Alice, a one-time actress, and he are soon to be observing their silver anniversary. But it’s no reason for them to call a ceasefire on verbally and physically slapping each other around.

Kurt, a quarantine officer visiting after a long absence, often watches their combat and is soon responsible for waking Alice’s sleeping hormones. Meanwhile, the captain endures a series of fits and strokes, conflicts arise regarding Kurt’s children, and Kurt flees. Alice and Edgar continue wallowing in their trough of love and hate.

Topol and Beck lack the appeal to make their tiffs anything other than exponentially irritating. His shuffling movements and sloppy appearance bely Edgar’s job title, while his growling voice and scenery chewing suggest an audition for Marat/Sade. Innvar, like the man he plays, does the best he can under the circumstances.

Mies Julie
If Strindberg’s name weren’t attached to it, many, like the sleepers visible throughout the house, would pay this play scant attention. A more successful, if still imperfect, picture of the battle of the sexes is available in Farber’s Mies Julie, which walks off with the honors.

The year before, Mies Julie played at St. Ann’s Warehouse and is now revived with a new cast under Shariffa Ali’s direction. Farber moves the situation to a farm in the desolate Eastern Cape Karoo, South Africa, where Freedom Day, 2012, is being celebrated (offstage) by black squatters angry at the white landowners. While many of Strindberg’s plot points are retained, there are nearly enough differences to make this more an original than an adaptation. 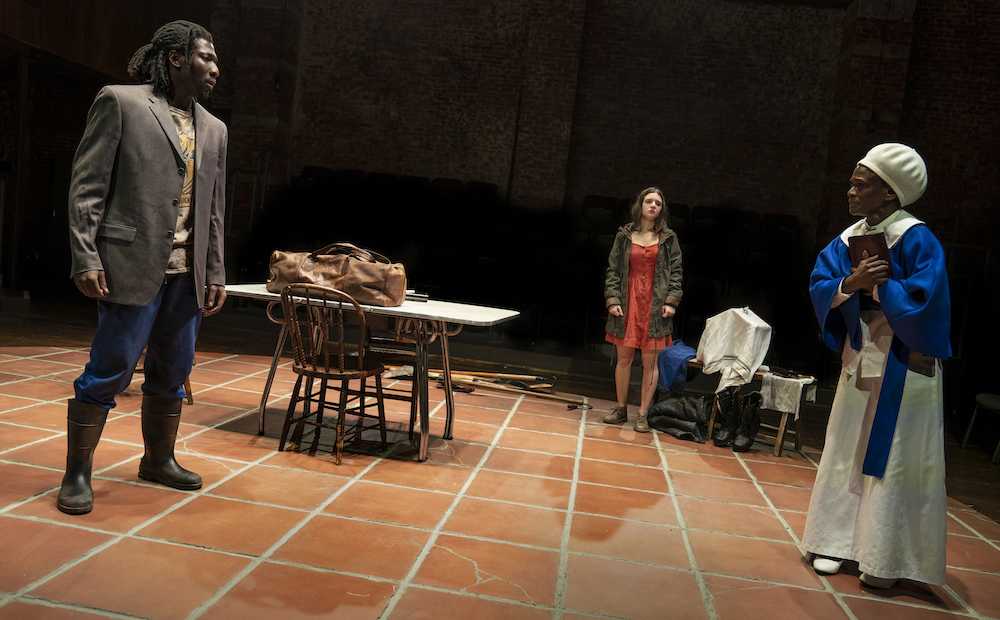 As a storm threatens, we meet Julie (Elise Kibler, sensual in a “Baby Doll” way), the restless, neurotic daughter of the racist, Afrikaans farm owner, whose fiancé recently ended their engagement. She’s hot for John (James Udom, all macho sensitivity), the Xhosa farm worker she tries to dominate and eventually seduces. The pious housekeeper, Christine (Patrice Johnson Chevannes, maternal but sharp-tongued)—John’s fiancée in Strindberg (who calls him Jean)—has been reimagined as John’s mother, who also raised Julie. Regrettably, the intense performances of these actors (especially Udom) are marred by the occasional unintelligibility of their accents.

There’s also Ukhokho, an ancestral figure, played by 90-year old Vinie Burrows, watching from the sidelines and sometimes drifting ghost-like across the stage like a cautionary presence. This nod to local history (the farmhouse was built over Xhoso graves) was more powerfully evoked (with two women) in the superior 2013 production, whose choreographic excellence is now nowhere to be found.

Performed in-the-round, like The Dance of Death, but with an overhead fan circling through the haze above a dingy kitchen, Mies Julie evokes the sultry world of a Tennessee Williams play, with sweat, booze, boredom, and repression colliding in a cocktail of lust. Julie makes her first entrance wearing a revealing red sundress, then lies face upward on the table, her thighs quivering with desire as John watches from across the room. She then exits, but just before she reappears, Christine talks about Julie’s dog as a bitch in heat, an image impossible to forget as we watch Kibler’s anxious pacing. 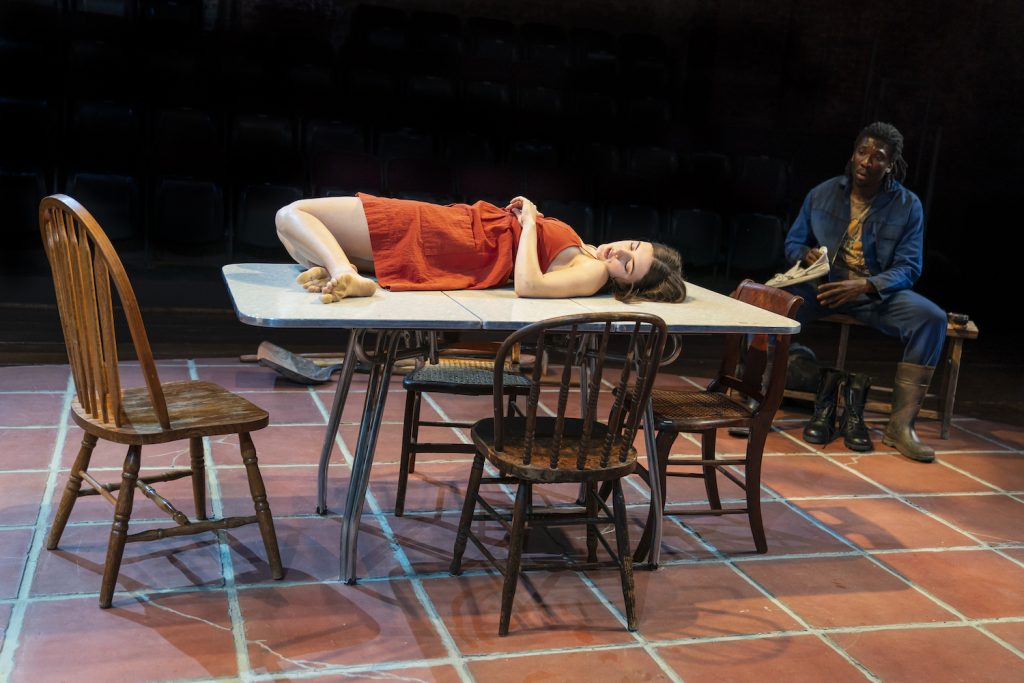 Farber’s 75-minute play, reminiscent of 2009’s Miss Julie: Freedom Summer, set on a Mississippi plantation in 1964, adds to Strindberg’s focus on male-female power dynamics and class warfare, tensions tied to post-apartheid racial and historical land ownership issues. All of it is expressed through the medium of John and Julie’s passion, leading to Julie’s ghastly onstage demise (offstage in Strindberg).

Neither of these revivals is a must see, but if you must see one, I suggest Mies Julie.