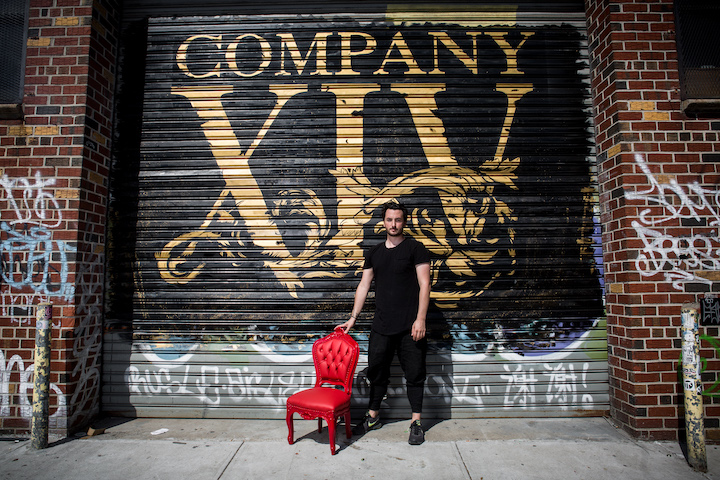 Company XIV returns with another neo-baroque reimagining under the direction of Austin McCormick. This time he and his team of wildly creative designers and a cast of versatile dancers, singers and cirque performers go down the rabbit hole in Queen of Hearts. Actually, an ornate wardrobe swallows the inquisitive girl — one of the many liberties taken with Lewis Carroll’s source material and the kind of twist that McCormick has become known for. The Broadway Blog caught up with McCormick by phone prior to the show’s opening at the company’s new space in Bushwick, Brooklyn.

The Broadway Blog: How would you describe Company XIV’s aesthetic?

Austin McCormick: So much of what we do is reimagine fairy tales that audiences have a relationship with. The Nutcracker, for example — most people have seen that ballet so it allows me to take it into new directions and play with people’s memories and perceptions. Alice in Wonderland provides the perfect vehicle for the company in that way because so many people love that story and have a deep connection with the characters. 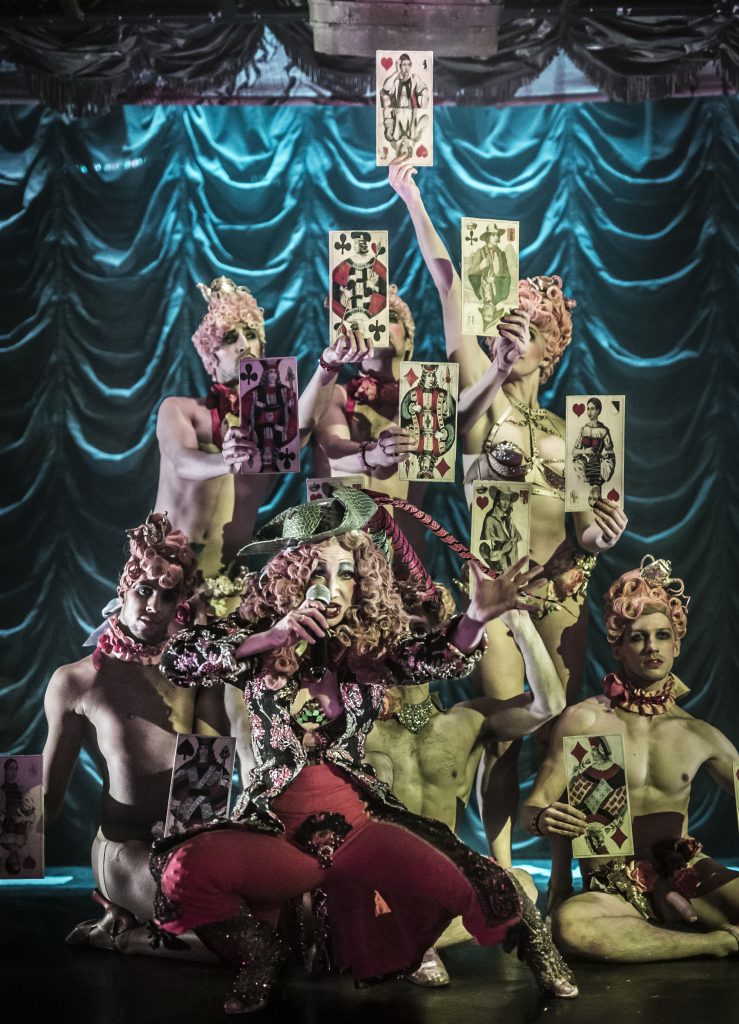 BB: Did you discover anything unexpected when you revisited Lewis Carroll’s original book?
AM: I reread it and a similar thing happened as with other shows we’ve created: I thought I knew the story and the ins and outs, but there were a lot of characters that I forgot about. There’s just so much imagery and things to pull from, so I’m planning to hit on all the known story points but there are a few things I’m weaving in that are a little less known or are abstracted.

BB: Where do you begin? With plot and structure or how you’re going to score it? Maybe with your ensemble, since you’ve been working with many of them for so long and know their skill set? What’s step one?

AM: It all happens simultaneously. I’m very much inspired by the performers in the company and what their unique talents are, so it’s certainly a jumping-off point in terms of how to utilize these amazing performers of XIV. While I’m thinking about it, I’m thinking about the source material.

I have this amazing costume and set collaborator, Zane Pihlström. We’ve been working together for eight years now, and he’s present at those early meetings to brainstorm new creations, which can influence the story. Music is also a huge part of the show and the audience’s experience. The music is so varied that I just start to look at everything, pulling from opera and classical music. We have these incredible rock and soul singers, who open up a new world of different genres, so it’s certainly going to be an eclectic show. 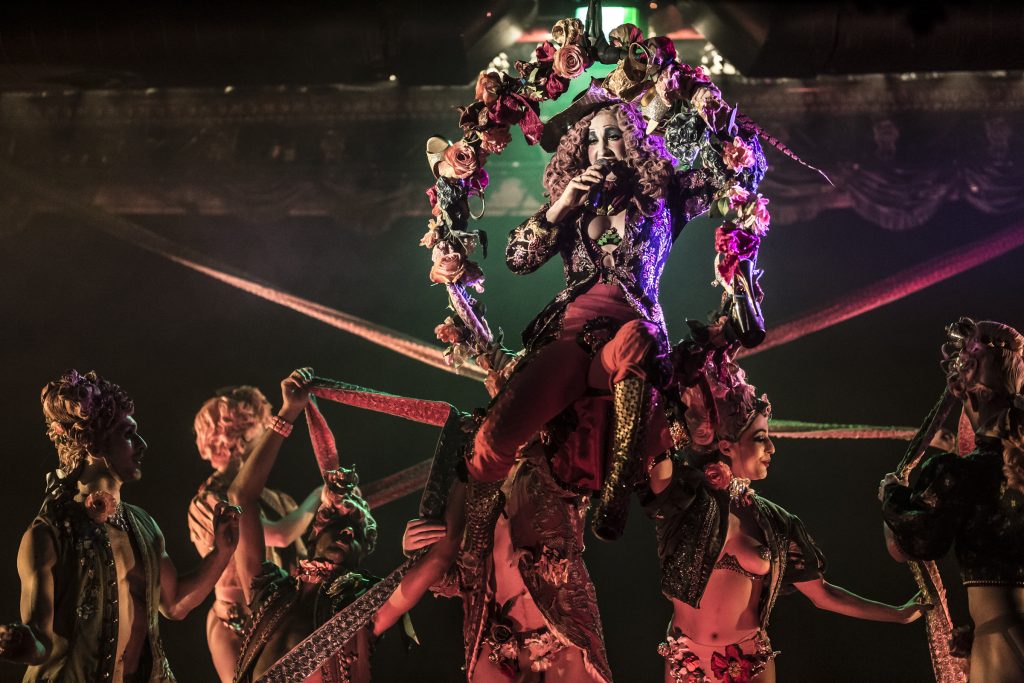 BB: It’s terrific that you have a core group that you’ve been working with for so long. How have the creative partnerships deepened with your dance company?

AM: Even though the company’s such a mixture of genres — circus, burlesque, all these things — at its core, everybody really has a strong dance background. There’s always been a central group of people with dance talent that holds the group together. I think that’s really central to the aesthetic of the company, that it has a very high level, classically trained dance element.

Over time, the performers have become multi-talented. There’s a cross-genre thing happening where a lot of the dancers are aerialists and many of the dancers sing — we just had someone in the last version of Nutcracker Rouge that wrote and performed her own song. Opening up a permanent home has contributed to developing those talents, to be able to train in various apparatuses and have experience performing in longer runs.

BB: When did you first become interested in baroque dance?

AM: I started studying dance in Santa Barbara, California, and there was a French dance historian, Regine Astier, that lived in my town and I started studying with her when I was about eight years old. I learned how to reconstruct these dances through notation. The costumes were a huge part of what initially attracted me. It’s so ornate, gilded and over the top that, aesthetically, I was really excited by it.

I went onto study classical ballet and in studying baroque you really see the evolution, where classical ballet really came from. So it gives me an interesting sense of the art form’s history. I think the dance vocabulary is incredibly detailed and ornate, which contributed to my developing aesthetic.

BB: How has the move to Bushwick impacted the company?

AM: We’ve been looking for a home space for a lot of years and we’ve done a lot of pop-up seasons in different locations throughout Brooklyn and Manhattan. The cool thing is that we cultivated all these different types of audience for the work depending on where we were presenting.

Now that we’re in Bushwick, I’m noticing that not only are we getting the local artsy, a little more punky demographic, but those people that saw us in the West Village are now traveling to Bushwick and discovering a new neighborhood. I’ve heard the word “speakeasy” thrown around quite a bit because you enter an industrial building, not knowing you’re going to find Company XIV’s ornate and over the top aesthetic. 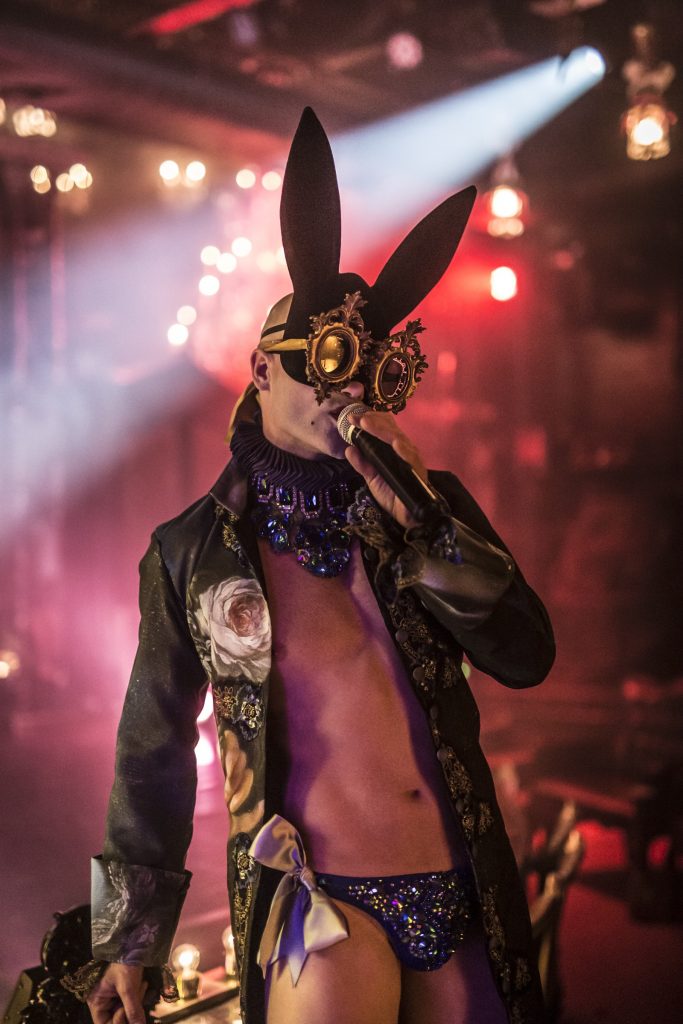 BB: It’s an interesting time in the multi-disciplinary theater to explore sexuality and gender. Have you thought about the line between sensuality and objectification and how to celebrate the human form and stay sensitive to the cultural climate?

AM: I try to create work that I’d like to see as an audience member, and it’s as straightforward as that. I make the shows with the audience in mind, and that starts with what I’d be charmed, delighted and challenged by. One of the biggest things I hear from Company XIV audience members is that we create an environment of inclusivity and artistic generosity. I’m really happy that in a time like this, people feel welcome and included. That spans across all the things that we do including casting — different body types and ages, and the elements of drag and gender-bending.

At the end of the day, we’re really trying to treat the audience the way that we would like to be received in a theater space.