Top Posts
Ingrid Michaelson Rings in the Holidays for Two...
Review: ‘& Juliet’ Is A Daffy, Absurdly Joyous...
Jinkx Monsoon & BenDeLaCreme’s ‘The Jinkx & DeLa...
Review: Victoria Clark Shines in the Refreshingly Original...
Review: Mike Birbiglia Astounds in ‘The Old Man...
A Sondheim Stocking Stuffer: New Book Offers Insightful...
From ‘Tattooed Lady’ to ‘KPOP,’ Plus A Quick...
Museum of Broadway Will Open Its Doors November...
Previews Have Begun for One-Man ‘A Christmas Carol’...
Strong Performances Aren’t Enough to Save ‘Almost Famous’
Home Beyond Broadway What Happens Behind a Nondescript Door: ‘Bar Dykes’
Beyond BroadwayReviews 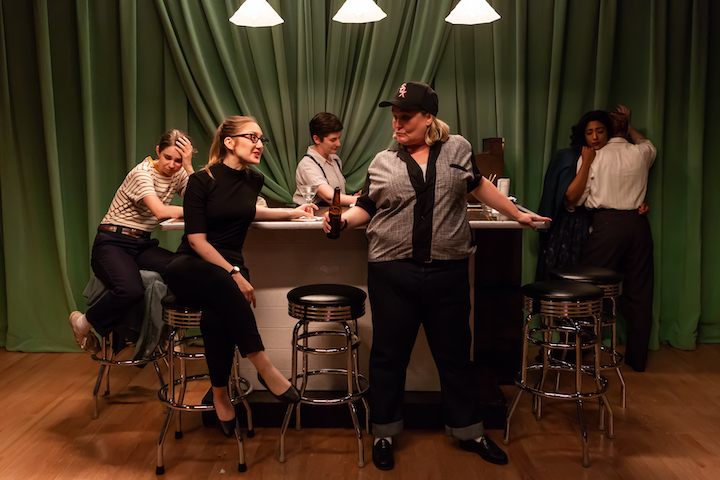 Drawing on her own experiences as a lesbian, first in the Deep South and then in a pre-Stonewall New York City, playwright Merril Mushroom transports audiences to the hidden worlds located behind nondescript doors, where 11 bar dykes dance, date, and duke it out.

The effortlessly charming Moira Stone plays stalwart barkeep Bo, who slings drinks and posts bail for her motley clientele of women. Among them is redhaired spitfire Bette (Angie Tennant), a butch who has taken up with femme Andy (Kimberly Singh), who may still harbor a crush on hungry kiki Cynthia (Azalea Lewis), a beatnik babe who just wants to give every girl a try, butch and femme alike. This particular night, Cynthia leaves with Elaine (Amy Bizjak), a busty blonde from Chicago. But not before she causes a jealous rage to erupt between Bette and Andy — a sad eventuality that can be found after midnight in every lesbian bar since the beginning of time.

Sherry (Uré Egbuho) is a kiki, too (meaning she’ll present either butch or femme) but she quickly chooses femme when butch looker Linda (Kiebpoli Calnek) asks her to dance. Over at the bar, Rusty (Jeannette Villafane) is a true-blue butch, from her fedora down to her oxfords. But after an evening spent plying quiet newcomer Lorraine (Brooke M. Haney) with whiskey, she cedes her tenuous claim on the crossword aficionado to stone butch greaser Trick (Alex Guhde), who swoops over with a couple of beers and picks up where Rusty leaves off.

Throughout the evening, Bo pours crying Joyce (Emily Verla) into a cab after she has unsuccessfully tried drinking away the pain her spiteful ex-girlfriend has caused by outing her to her mother. Bo serves drinks and connects women, and things seem to be going well for most of the women in the bar—until the cops come. 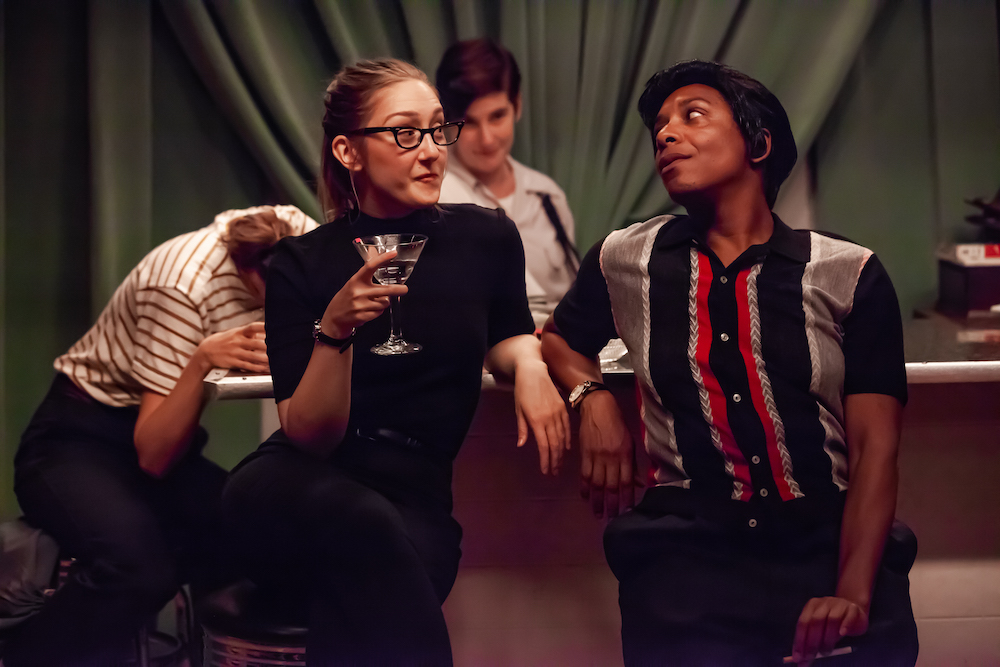 Sneering policemen (Scott Brieden and Micky Maindiratta) rush into the bar to hurl invectives at all the ‘perverts’ while checking their IDs. Predictably, they round up and arrest all the women of color and all of the butches, vowing to examine them for the obligatory “three pieces of women’s clothing,” per the old laws.

Bo is left to pour herself a stiff drink and make the necessary calls to get her girls out of the slammer. Although Bar Dykes was written in the 80s, it authentically captures the feel of what it must have been like to be out and lesbian in the 1950s. 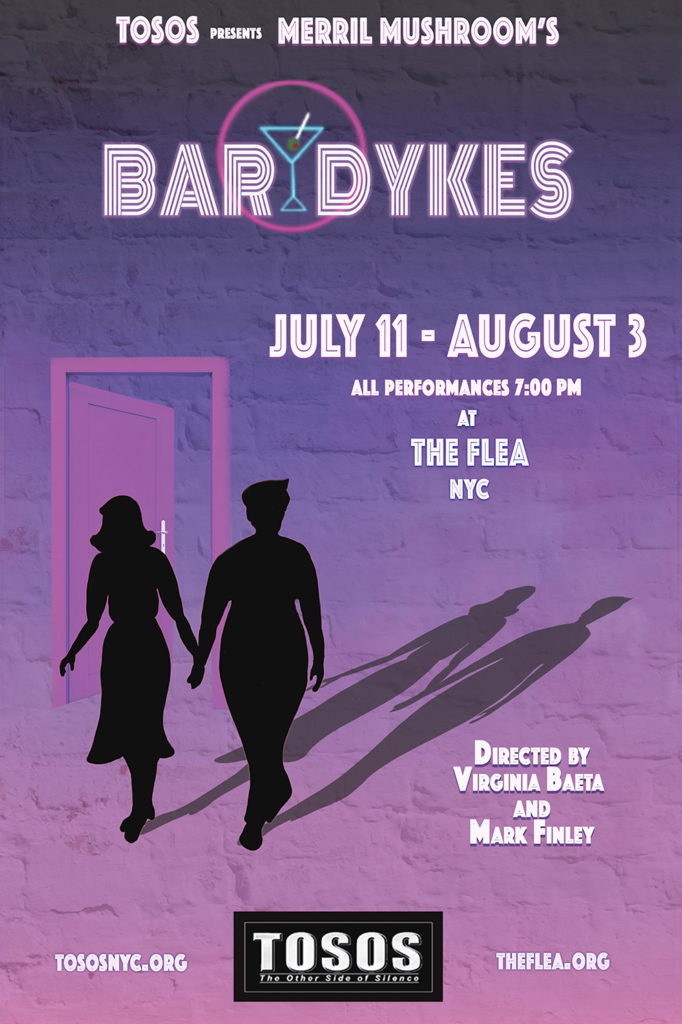 While the set is small, featuring only a bar with an old-timey cash register, two Art Deco chrome table and chair sets, and a jukebox, the actors manage to evoke a barroom. This Off-Off-Broadway venue is the perfect location to stage this sort of intimate performance, forcing the audience to become participants in the action by their very proximity to it.

In today’s uncertain times, where you can’t be sure from day to day what draconian anti-LGBTQ laws the current administration will choose to revive, it’s sobering to see how easily gays and lesbians could be pushed back into these shadows. That makes it more important than ever to stage plays like Ms. Mushroom’s—ones that give us a view of what our community went through just to attain fundamental freedoms like the ability to grab cold drinks with friends at the end of a long week without having to fear getting locked up just for being who they are.