Top Posts
‘Company’ to Hit the Road on North American...
Meet the Full Cast of ‘Shucked,’ Coming to...
Full Cast for ‘Parade’ Announced
Stephen McKinley Henderson Gives the Performance of His...
The McKittrick Hotel Announces the Return of ‘The...
Broadway Stars Honored with Academy Award Nominations
Taylor Trensch, Danny Wolohan, and More Join the...
A Gay Road Trip Comes to The Brick...
Maude Apatow of ‘Euphoria’ is the Next Audrey...
Tony Award Winners to Star in ‘Hercules’ at...
Home Beyond Broadway Abuses of Power: ‘The Thing With Feathers’
Beyond BroadwayReviews ‘The Thing With Feathers’ at The Barrow Group. (Photo: Todd Cerveris)

If you’re looking for a riveting psychological melodrama, acted with total authenticity, you’ll find it in Act One of Scott Organ’s The Thing with Feathers, directed with just the right tone of unsettling credibility by Seth Barrish for The Barrow Group (TBG). Act Two, which contains a surprising plot twist, is a little shakier but the two-hour play definitely holds one’s interest from beginning to end.

The Thing with Feathers is a straightforward, realistic play with an immediately accessible, socially resonant narrative; apart from its episodic, seven-scene structure, it’s unburdened by the dramaturgic tics of so many contemporary playwrights. Edward T. Morris’s set, sensitively lit by Solomon Weisbard, places us before a kitchen/dinette area—working sink included—downstage, a fan hanging from the ceiling, and, up right, a door from the street; too far upstage for comfort is a raised platform representing a teenage girl’s bedroom.

The bedroom’s occupant is the pretty, precocious, but susceptible Anna (Alexa Shae Niziak), just short of turning 17, and with an adolescent’s sweet tooth for the f-word. When the play begins, she’s doing her homework while chatting with a man named Eric (Zachary Booth) via a laptop connection.

Claiming to be a 21-year-old college student, Eric sounds friendly and intelligent, even sharing a taste for Emily Dickinson’s “Hope Is the Thing with Feathers” with Anna; he also expresses feelings for Anna that, at first, make her uncomfortable.

Anna’s divorced mom, Beth (DeAnna Lenhart), discovers the internet relationship and the difference in age between her daughter and Eric, which immediately causes her to be concerned. Anna dismisses her mother’s fears by revealing that Eric lives 900 miles away.

But when Eric, who turns out to be a handsome, clean-cut guy, shows up at Anna’s house while she’s alone, things begin to get really creepy. They get increasingly so even after Tim (Robert Manning, Jr.), Beth’s cool and collected policeman fiancé, becomes involved. Tim is cautious to announce his reluctance to abuse his power, a hint at one of the play’s underlying themes. But the play enjoys throwing us off the scent, red herrings and all. Eric, who at one point picks up a large kitchen knife, is a bold but crafty interloper who has no qualms about talking directly to Beth or Tim. He even confesses his actual age (more than 21) and his desire to have Anna, with whom he’s fallen in love, leave with him.

Act One ends following a conversation between Beth and Eric that suggests more is going on than we at first imagined; we don’t learn what’s up Eric’s sleeve, though, until Act Two, when his true motives are disclosed. Those, of course, like their outcome, you must discover for yourself.

Organ is careful to justify the twists in his plotting, even if, as usual in such plays, we need to suspend our disbelief a bit. The quibbles one could raise in Act One are minor; they become a bit more apparent in the second act, however, particularly when Eric secretly does something crucial for the plot that some will realize way before the party most affected does. And the conclusion, with its emphasis on “hope,” isn’t the work’s strongest suit.

The issue of inappropriate, internet-influenced liaisons involving vulnerable youngsters, of course, is one with which many families grapple. Organ demonstrates how such situations create problems of trust even among the closest family members. Naturally, the most responsible adults are themselves often morally culpable; it’s the contrast between Anna’s actions and her mother’s past that this play’s greatest moral dilemma lies.

TBG has assembled a knockout cast that has us holding our breath during the tension-filled play. Alexia Shae Niziak is a find as Anna, whom she makes into a totally familiar teenager, smart and independent, yet struggling to come to terms with emotions she doesn’t fully comprehend. DeAnna Lenhart is outstanding as Beth, who must confront her own ghosts while handling those that threaten to become her daughter’s. Zachary Booth’s Eric is a fascinating study in calculated yet sympathetic cunning, while Robert Manning, Jr.’s Tim offers a solid, grounded presence that controls the volatility of a potentially explosive conflict.

The Thing with Feathers
The Barrow Group
312 W. 36th St., NYC
Through February 10 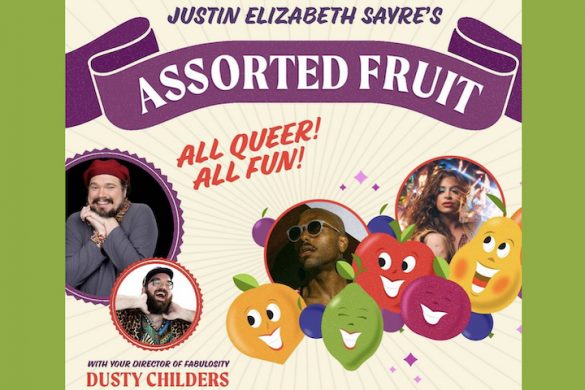