Top Posts
‘Company’ to Hit the Road on North American...
Meet the Full Cast of ‘Shucked,’ Coming to...
Full Cast for ‘Parade’ Announced
Stephen McKinley Henderson Gives the Performance of His...
The McKittrick Hotel Announces the Return of ‘The...
Broadway Stars Honored with Academy Award Nominations
Taylor Trensch, Danny Wolohan, and More Join the...
A Gay Road Trip Comes to The Brick...
Maude Apatow of ‘Euphoria’ is the Next Audrey...
Tony Award Winners to Star in ‘Hercules’ at...
Home Beyond Broadway Barry Manilow’s ‘Harmony’ to Play Off-Broadway in 2020
Beyond BroadwayHot Ticket 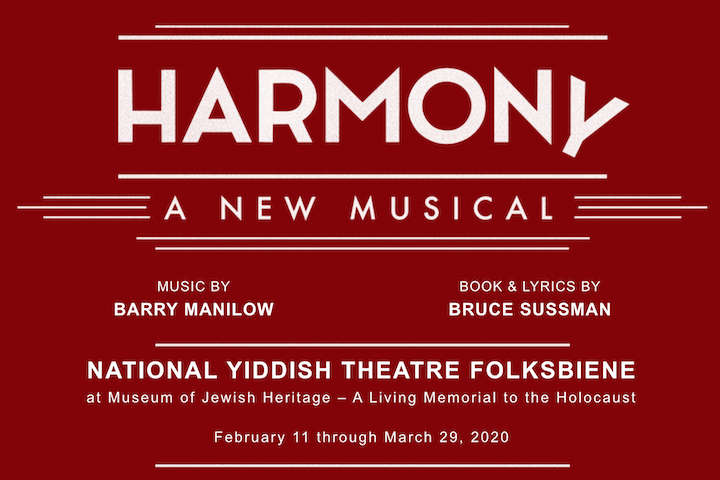 Fresh from the success of Fiddler on the Roof in Yiddish, the National Yiddish Theatre Folksbiene (NYTF), winner of a 2019 Drama Desk Award, in association with Tony Award-winning Producer Ken Davenport, will present the acclaimed musical Harmony by the legendary Barry Manilow and his longtime collaborator Bruce Sussman in February 2020.

NYTF’s production marks the New York debut of the musical, which tells the true story of the Comedian Harmonists, an ensemble of six talented young men in 1920s Germany who took the world by storm with their signature blend of sophisticated close harmonies and uproarious stage antics, until their inclusion of Jewish singers put them on a collision course with history.

“National Yiddish Theatre Folksbiene is excited to bring Harmony to New York City,” said Zalmen Mlotek, Artistic Director of NYTF. “Harmony speaks to the human spirit in the face of adversity and atrocity. The story of the Comedian Harmonists, whose soaring careers were cut short due to anti-Semitism, reflects the spiritual resistance that was necessary to get through one of the most dehumanizing periods in history. It’s important that their story about the human spirit during the darkest of times be told. Barry Manilow and Bruce Sussman have created a show that speaks to the best and worst of humanity.”

“Harmony is finally being presented, and I couldn’t be more thrilled,” Barry Manilow said. “I am very proud we have found a perfect home for this labor of love of over 20 years.”

“This is a show about the quest for harmony in what turned out to be the most discordant chapter in human history,” Bruce Sussman said. “I could not be more thrilled and proud that Harmony‘s New York debut will be in this theatre, associated with this museum, that overlooks the Statue of Liberty.”

The legendary Manilow and theatre veteran Sussman have collaborated for nearly a half-century. Together they have written hundreds of songs for all media — films, television, and stage, including the Grammy Award-winning Copacabana.

Scenes from the Ahmanson Theatre production of Harmony.