Top Posts
‘Company’ to Hit the Road on North American...
Meet the Full Cast of ‘Shucked,’ Coming to...
Full Cast for ‘Parade’ Announced
Stephen McKinley Henderson Gives the Performance of His...
The McKittrick Hotel Announces the Return of ‘The...
Broadway Stars Honored with Academy Award Nominations
Taylor Trensch, Danny Wolohan, and More Join the...
A Gay Road Trip Comes to The Brick...
Maude Apatow of ‘Euphoria’ is the Next Audrey...
Tony Award Winners to Star in ‘Hercules’ at...
Home Reviews Too Cool for School? ‘Be More Chill’ Opens on Broadway
Reviews 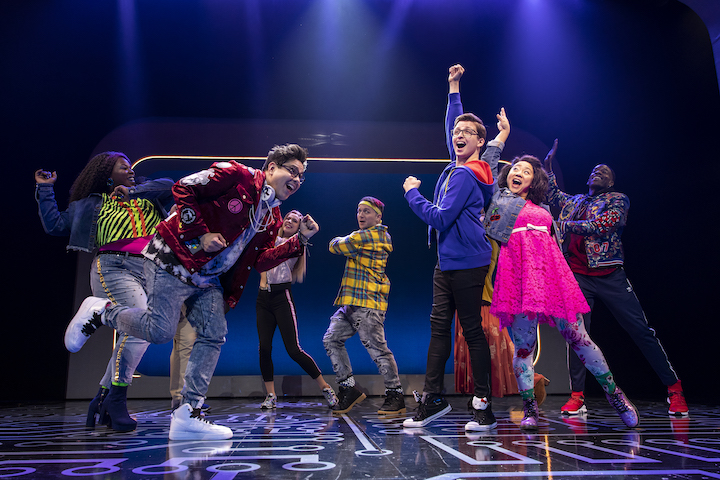 The cast of ‘Be More Chill.’ (Photo: Maria Baranova)

“Technology isn’t dangerous on its own,” says the loose-limbed Michael before his best friend Jeremy swallows a Squip, a microchip computer pill that will turn him from high school loser to cool kid. “It’s just about how we choose to use it. So don’t screw it up.”

It’s a warning that reverberates like a Korg M1 synthesizer throughout the latest incarnation of Joe Iconis and Joe Tracz’s social media musical sensation Be More Chill, which has finally arrived on Broadway after kicking around the regional and Off-Broadway theater circuit since its 2015 premiere.

By now, anyone remotely familiar with Be More Chill is aware of its Tumblr and YouTube success stemming from a cast album that struck a chord with Gen Z followers. Sight unseen, the album has been streamed more than 200 million times. Now, producers and the creative team are tasked with managing expectations of emotionally charged superfans as well as courting theatergoers who might be willing to pay up to $325 per ticket for “Squip Zone” seating (the first two rows, which also includes “an exclusive limited edition collector’s item”).

That must be some pill. Or not, depending on who you ask. 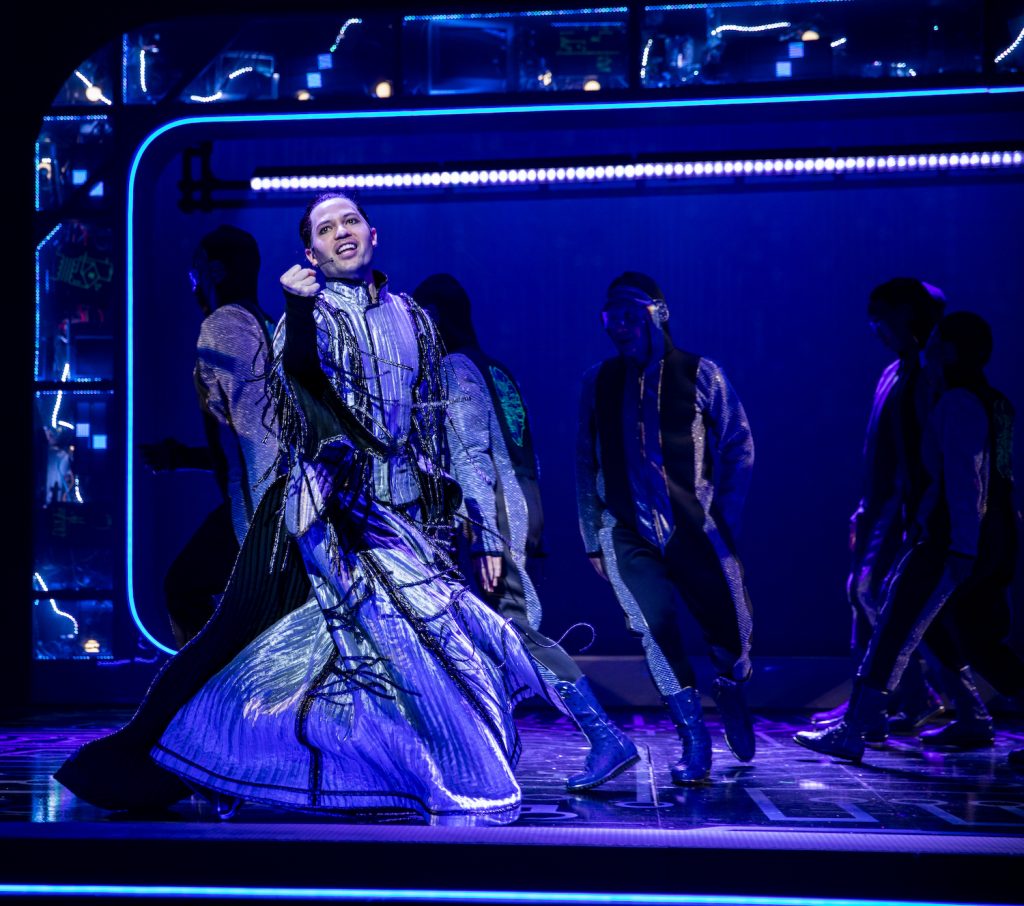 Much has been retained from the recent Off-Broadway production, including the entire cast. Will Roland (Dear Evan Hansen) returns as the nerdy Jeremy, as does George Salazar (Tick, Tick, Boom!), now more flamboyant and confident as the best friend with a penchant for vintage sodas like Mountain Dew Red. Stephanie Hsu as Jeremy’s crush Christine and Jason Tam as the swaggering manifestation of CPU technology are also back at New Jersey’s Middleborough High, but it’s a new school year (and Broadway season), and teen fatigue may be setting in.

Like Jeremy, who would likely be the last one invited to the party, Be More Chill’s Broadway arrival follows the heels of Dear Evan Hansen, Mean Girls and The Prom — all set in and around high schools. Setting it apart from the pack is its not-too-distant-future sci-fi angle, originally conceived by Ned Vizzini, author of a young adult novel of the same name on which the musical is based.

The suicide rate, particularly among teens, continues to rise, as well as the percentage of students who experience persistent feelings of sadness or hopelessness. Iconis and Joe Tracz deftly package these themes in a palatable oeuvre of musical theater, but director Stephen Brackett and choreographer Chase Brock’s hit-or-miss staging still can’t seem to find its groove. Brackett steers the ensemble toward campy, over-the-top mugging, opting for a style that underestimates the multi-dimensionality of today’s real-life teens. Brock vacillates between show choir and a slightly more exciting vocabulary with subtle retro references, but very little of the movement has the kinetic, hip-hop energy of Casey Nicholaw’s Mean Girls or The Prom.

Roland and Salazar have found deeper roots since last summer’s Off-Broadway production, leaning into Ryan Rumery’s sound design to allow for more introspective moments such as Roland’s slow build in the Act I closer “Loser Geek Whatever” or Salazar’s “Michael in the Bathroom,” the show’s anthem and so exquisitely delivered (and musically crafted with an increasingly throbbing undercurrent) that it may very well earn the actor a Tony Award nomination this year. 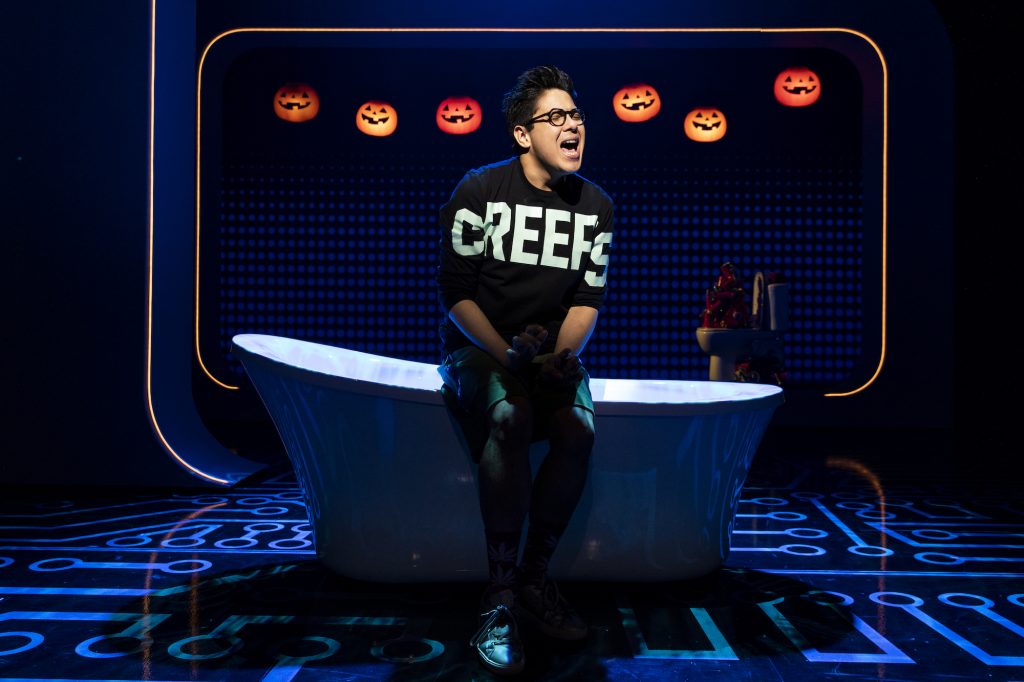 Less successful is Hsu’s Christine, whose Act I “I Love Play Rehearsal” is so over choreographed and presentational that it renders her a caricature, laying the groundwork for an uphill battle through the remainder of the show. Tam falls into the trap of a one-line descriptor (“You look like Keanu Reeves,” Jeremy says upon the Squip’s first appearance). His performance has now become a breathy, Hollywood homage, and much like Reeves, mostly flat. Swathed in futuristic trenches a la The Matrix, an array of Cruella de Vil wigs and a final LEGO Ninjago-inspired head cap, Tam is at his best when Brock utilizes his dance abilities for Vogue-like sequences that loosely reference The House of Ninja.

The chameleon-like ensemble (with a standout performance by high-octane belter Tiffany Mann) keeps the action moving at a brisk pace as the plot veers from Vizzini’s original intimate, naturalistic ending toward an apocalyptic Jeremy-and-Michael-save-the-world finale. The amped-up production value, which includes more eye-popping costumes by Bobby Frederick Tilley II, enhanced projections by Alex Basco Kosch, punchy electronica orchestrations by Charlie Rosen, and even a few entrances from the rafters, befit Be More Chill’s new digs at the Lyceum Theatre.

Jeremy eventually dispels the Squip’s assertion that “a shared negative opinion is the fastest social bond.” In that spirit, I’d say Be More Chill, in spite of its directorial inconsistencies, is a pill worth swallowing.

Matthew Wexler is The Broadway Blog’s editor. Read more of his reviews at wexlerwrites.com.