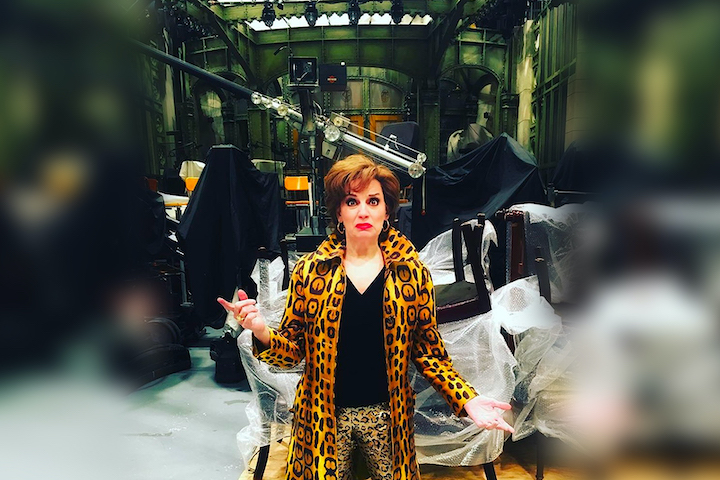 It’s your last chance (this time around) to see funny lady and belter Beth Leavel as she concludes her week-long residency at Feinstein’s/54 Below. The Tony Award-winner is slated to appear in the pre-Broadway tryout of The Devil Wears Prada, which premiers in 2021 at Chicago’s CIBC Theatre. But in the meantime, fans can catch Leavel in concert gigs around the country.

Leavel’s current act is a catch-all of songs and stories from her nearly 40 years in the theater, told with self-deprecating humor and punctuated with high-octane vocals for which she’s known. Most recently, Leavel was seen on Broadway in The Prom and offers audiences renditions of her character’s two big songs, “It’s Not About Me” and “The Lady’s Improving.”

Leavel’s trials and tribulations of an actor’s life fill Feinstein’s/54 Below’s gilded cabaret space as she speaks of first moving to Hell’s Kitchen in 1981 — “clueless as to what I was going to do” she notes. She’s appeared in both the original and revival of 42nd Street, along with 11 other Broadway shows, including her Tony-winning performance in The Drowsy Chaperone. A role that nearly passed her by.

Leavel repeatedly auditioned for the show, directed and choreographed by Casey Nicholaw. But she didn’t get the job. It wasn’t until just weeks before the rehearsals started that Leavel got the call that, indeed, the job was hers. Perhaps she wasn’t the first — or second — choice, but the performance eventually earned her a Tony Award for Best Featured Actress in a Musical.

Beyond Broadway, Leavel has often worked at the Muny, St Louis’s historic outdoor theatre. She’s played leading ladies from Dolly Levi in Hello, Dolly! to Mama Rose in Gypsy, and showcases favorite songs in her act. She also speaks of auditions that never came to be, such as attempting to learn the dance combination for CATS before walking out of the theatre instead of embarrassing herself in front of choreographer Gillian Lynne.

Coming soon to Feinstein’s/54 Below: