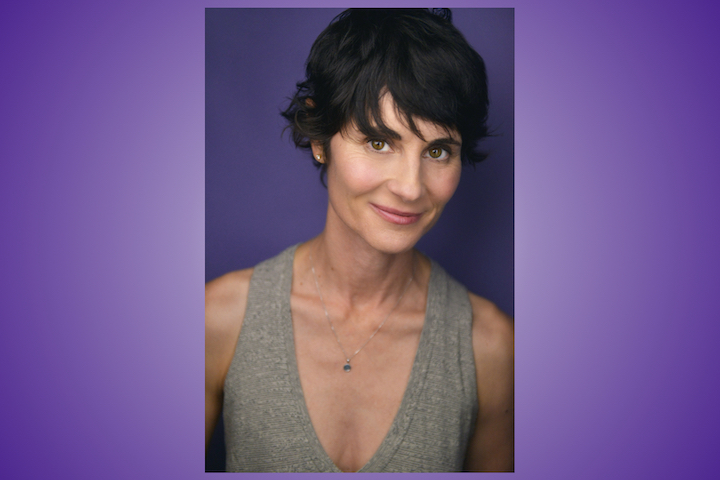 Feel the love this February when rising star Beth Malone brings to life the title role in The Unsinkable Molly Brown, through March 22 at Abrons Arts Center.  This musical takes a spirited look at the life of outspoken socialite Margaret Tobin Brown, who rose through a life of poverty to become rich and cultured, travel throughout Europe, and survive the sinking of the Titanic.

The original Broadway production played from 1960–62 at The Winter Garden Theatre, followed in 1964 by the popular film starring Debbie Reynolds, who received an Oscar nomination for her performance. Tony winner Kathleen Marshall directs and choreographs this reimaging, which features a new book and additional lyrics by Dick Scanlan.

This reimagined version of the hit musical got its footing at the Denver Center Theatre Company with Beth Malone in Fall 2014. Now, it is gloriously brought to life on Manhattan’s Lower East Side at Abrons Arts Center. 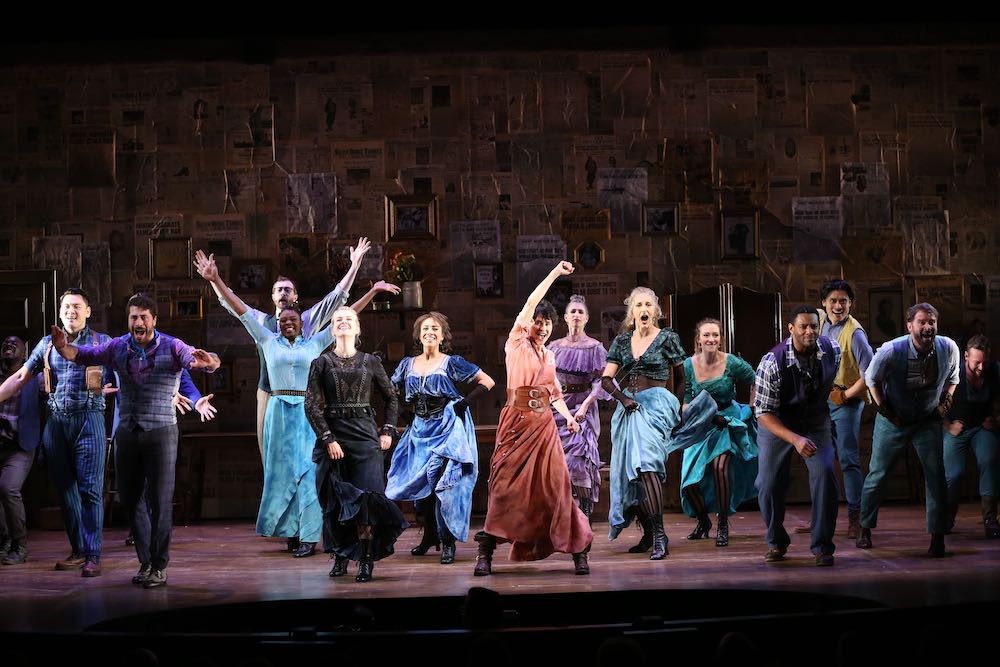 BB: This restaging of The Unsinkable Molly Brown differs in several ways from the movie; you have called it “more modern and less formal.” Can you give readers one example of how that manifests in the action?

Malone: It’s a complete page one rewrite; from the moment the play starts, it’s a different story. It’s got the same central characters and is set in Leadville, Colorado, like the movie—but that’s where the similarities end. The circumstances surrounding these character’s lives is closer to the actual historical events. It’s a smarter and hipper version of Molly Brown because the old one was pretty hokey.

BB: You lived in Colorado, and remarked in a recent video that you’d “been to Leadville many times.” Was this background helpful in understanding the hardscrabble life of Molly Brown and her desire to learn, to travel, and to become something?

Malone: For me, it’s about having a deep knowledge of the kind of people that live up there, tough people who play hard and are really accustomed to the discomfort of deeply cold places and the hard work it takes just to go out and get food every day. These are hardy, no-bullshit people; they don’t have time for it! I have a deep understanding of this kind of human being because [my wife] Shelly and I still have a place up there, well within JJ Browns’ old silver mining district: Leadville, Aspen, Ashcroft and Twin Lakes.

When you take that $7,000 ski trip, you’re skiing over those old mining tunnels. The silver boom built that fancy skiers paradise. Leadville is higher, colder and more exposed, and doesn’t have the same geography of north-facing Aspen. So, you have to be a tough motherfucker to ski Leadville’s Ski Cooper. And hilariously, the main thing they mine now is Molybdenum, called moly for short.

Malone: My favorite is “Wait for Me,” the 11 o’clock number that Michael Rafter—a frickin’ genius—constructed out of a commercial Willson wrote for the Chemical Warfare Service called “Fire Up.” Rafter put words to this melody, and it’s what I’m singing on the lifeboat.

BB: One of the songs that does transfer over from the movie is “I Ain’t Down Yet,” with Molly Brown singing “nobody wants to see me down like I wants to see me up.” Why will nobody ever keep Beth Malone down?

Malone: Tenacity. I’m like a bad penny; I keep resurfacing. I really do have a weird skillset, because this and Fun Home or Angels in America are not even the same job. But I actually trained, went to grad school and took it seriously. I wanted to be able to do backflips, act, sing verse, and hit a high F. I want access to people making great art, and the only way to get in the room with someone like Tony Kushner is to have the skills.

BB: One of the most popular songs Molly Brown sings is “Belly Up to the Bar.” What New York City bar do you most enjoy bellying up to, and what’s your drink of choice?

Malone: I enjoy going to this dive bar on 96th and Amsterdam, where I watch the football games I don’t get on my TV. I usually order a Guinness or this Irish beer called Smithwick: if I find that on tap, I’ll always order it because it’s made with water from the place in Ireland my family comes from, so I know if I’m drinking a Smithwick, I’m drinking Kilkenny water. But I’ve also been known to order a Manhattan or Old-Fashioned.

BB: Margaret Tobin Brown kept a suite at the Hotel Colorado, which now has photos and artifacts from her life, including a lifebuoy from the Titanic. You stayed there on your birthday, January 1. Did being surrounded by her belongings and sleeping in her bed help you delve further into her character?

Malone: I kept hoping she would visit us, because all her stuff is there, her furniture, even her giant four-poster bed. It was really special and really spooky. You got the sense she could walk in the door any minute. You think of playing someone long gone who made a mark on history, but she’s so current, such a hip character, and so progressive it feels like she’s really in the room with you.

BB: Can you share a funny anecdote about preparing for this show’s Off­–Broadway debut?

Malone: When I was doing it in Denver, I would black out; the altitude got to me. The big chase scene was on an even bigger stage, and when they finally tackled me, I saw spots. My vision left and came back slowly; I had to get used to it happening every day. Here, I’m not so dizzy, but I had a lot of getting to know the new JJ (David Aron Damane). He’s a treat to be on stage with, and I’m letting him in on my weird, sick personality and sense of humor a little at a time. I’m more bro than broad, and I don’t want to overwhelm him. He’s got this great big voice, but usually, in plays, he’s just ‘third guy from the left.’ It’s great that this time, the casting could see this beautiful, big, black man as the lead.

BB: In Seth Rudetsky’s Playbill interview, you recall being randomly discovered several times in your life—once while singing “River Deep and Mountain High,” by a New York producer who got you your first Broadway show, and again by Lisa Kron for Fun Home. Despite this, you nearly gave up hopes of being a professional actor. What kept you in the game throughout all those years?

Malone: The fear of not doing it is stronger than the fear of doing it. Every time I got to the point where I said, “I’m done,” I’d think, “But before I quit, I’m going to write this solo show and do it so I won’t have any regrets.” That’s how I ended up writing So Far, which became a really great exercise to check in with who I am and what I’m doing on this planet. And once you know those answers, your career chases you. You become a vessel for these people you play, and that will get you into the rooms you’re supposed to be in.

BB: You first garnered widespread attention for your work as grown-up Allison in Allison Bechdel’s Fun Home. What was the impact of playing an openly lesbian protagonist in a musical, and having it lead to a Tony nomination?

Now there is a pendulum swing in the other direction. We were living our lives out loud and proud, but people were seething over our joy. But those people can fuck off; they went to the polls and voted, but I don’t think that’s most of our country. Half the people who showed up to vote are haters, but the other half are good people, and we can show that at the polls this year. I know they are. The bad people only have a fire in their ass to stand up at a school board meeting and say, “Go back to Mexico,” because a small animal part of their brain has been emboldened by that “orange hell beast,” as Kushner calls him. BB: Debbie Reynolds will forever be associated with the role of Molly Brown. Reynolds had a famous feud with Elizabeth Taylor; do you have any existing feuds with any actors?

Malone: Judy Kuhn [the mother] from Fun Home used to slap me backhand right across the face every night before we went on stage. Still, I can’t really say it was a feud because she was more like my show wife.

BB: What performers have inspired you, and have you ever had the chance to meet them?

Malone: I’ve been inspired by so many people! The first time I saw Bernadette Peters was in Annie Get Your Gun, which I second-acted because I couldn’t afford the ticket. She walked around that stage like it was her living room. She is a stage creature, and her level of making that stage her bitch was so illuminating. Also, Norbert Leo Butz in Dirty Rotten Scoundrels. A lot of people maybe thought his performance was off the rails, but I saw a frickin’ genius at work! He was pushing broad, physical comedy to its absolute limit while still being believable. That’s what I want to do. When I saw that, it named something unnamable for me.

BB: I had the good fortune to interview Debbie Reynolds in May 2014, as she was preparing her final auction of film memorabilia; she was happy to sell Dorothy’s ruby slippers and glad to get $5 million for Marilyn Monroe’s evening gown but was unwilling to part with some items—like Orson Welles’ mink coat from Citizen Kane or the actual Maltese Falcon—at any price. What piece of showbiz ephemera do you most value from your career?

Malone: Allison Bechdel does these things where she’ll draw you. So, she cartooned me and Shelly skiing, which is worth a million dollars to me. And Andrew Garfield gave me a book of Mary Oliver poems during Angels in America last year; those are my treasures. And I also treasure things people have said to me; one night, Tony Kushner pulled me aside after Angels and was gushing compliments. Luckily, Shelly and some of my other friends were in my dressing room, and after he left, I said, “Did you all hear that? That just happened, right?”

Malone: People need to open their hearts and remember what this country is all about because that Statue of Liberty speech was real. This country was not built on the exclusionary hatred we’re seeing right now, it was remarkably built by immigrants. To start excluding certain nationalities and religious orientations at this stage… well, you need to look at history and see at what point that’s occurred before and draw some parallels. It doesn’t take a genius to see what kind of agenda and person is at work. So, me singing “share the luck” is very real, because unless you’re Native American, you’re an immigrant, too.

Malone is an active member of the LGBTQ community who advocates for many worthy charities. See her on February 24 as she donates her time to Broadway Belts for PFF! to fight pulmonary fibrosis, at the Edison Ballroom. Or catch her on the Lower East Side, bringing the legendary Molly Brown to life.