Top Posts
Stephen McKinley Henderson Gives the Performance of His...
The McKittrick Hotel Announces the Return of ‘The...
Broadway Stars Honored with Academy Award Nominations
Taylor Trensch, Danny Wolohan, and More Join the...
A Gay Road Trip Comes to The Brick...
Maude Apatow of ‘Euphoria’ is the Next Audrey...
Tony Award Winners to Star in ‘Hercules’ at...
‘New York, New York’ Finds its Two Leads
Full Casting Announced for Oscar Isaac-Led ‘The Sign...
Disco Pop Musical ‘Here Lives Love’ to Bow...
Home Beyond Broadway The Extraordinary Comes to Life in BoHo Theatre’s ‘Big Fish’
Beyond BroadwayReviews 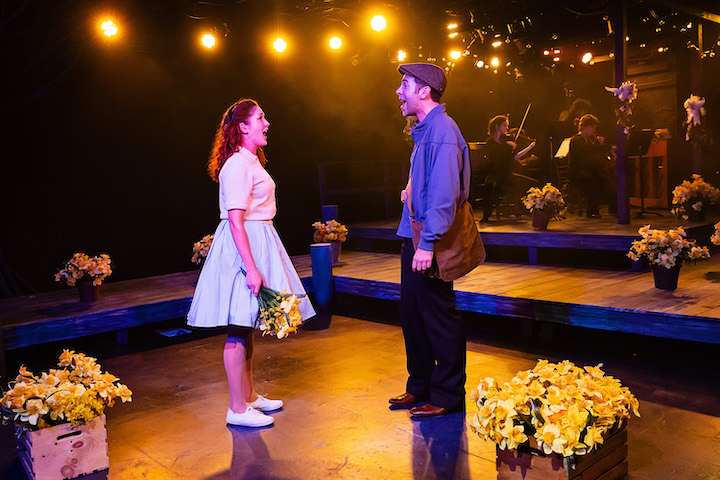 BoHo Theatre closes out its 2019 season with a larger than life, stunning and touching production of Big Fish, now onstage at Chicago’s Greenhouse Theater Center. The musical, which debuted on Broadway in 2013, is based on Daniel Wallace’s quirky 1998 novel, Big Fish: A Novel of Mythic Proportions, as well as the 2003 film directed by auteur of the oddball, Tim Burton.

The plot of Big Fish is small, slow and charming, while also conductive of big, electric messages about the passage of time, the nature of parenthood and the power of magic. The BoHo creative team and a gifted cast turn a small, upstairs stage into an astonishing world of witches, giants, adventure and an aching love so big that the production’s opening night audience openly wept. This is storefront theater at its finest and in this critic’s opinion, one of the best Chicago offerings of 2019.

In modern-day Alabama, Edward Bloom (an utterly transfixing Tommy Thurston) and his wife Sandra (Kyrie Anderson) are preparing for their son’s (Jeff Pierpoint) wedding. Will Bloom has become emotionally estranged from his father, who he views as an odd man in a complicated relationship with the truth. While Sandra and Will’s new bride (Nicole Besa) take delight in Edward’s Odysseus-like coming-of-age stories, Will is annoyed by his father’s opacity as he prepares to start his own family.

Mr. Thurston is a revelation as an admittedly imperfect husband and father who nonetheless regards life as a series of colossal possibilities. No experience is limiting except as beheld by the small thinker. It can’t be easy for an actor to play a character who repeatedly vacillates between a teenager and an elderly man without ever losing sight of subtle shifts in energy, appearance and wisdom. Mr. Thurston is so effective at these quick changes that it’s easy to forget we’re watching the same performer.

The actor is supported by a marvelous cast that includes Ms. Anderson as Sandra, Edward’s muse, best friend and wife. As portrayed by an actress gifted in emotional range, song and pulchritude, it’s easy to understand the passionate man’s love for Sandra at first sight. And Robert Quintanilla is remarkable as Karl, one of the characters from Edward’s whimsical tales. A gentle behemoth with a delicate cultural palette and thirst for learning, Mr. Quintanilla’s performance is reminiscent of Andre the Giant’s turn in The Princess Bride. His work is just as endearing as the former wrestler’s in that film, however, accompanied by stronger diction. 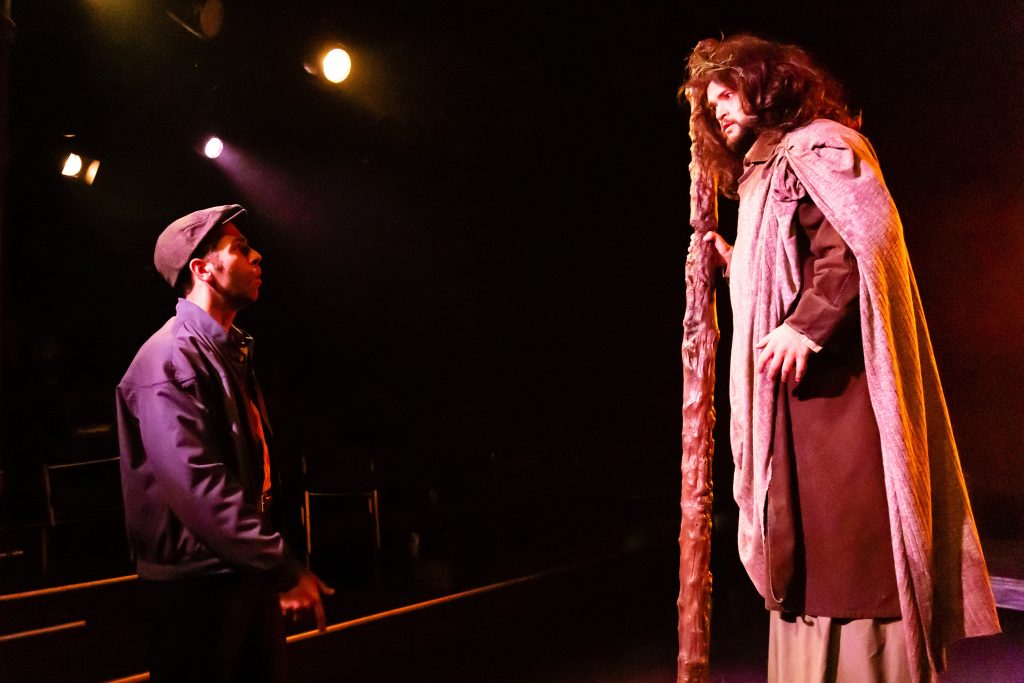 As I took my seat for last weekend’s press opening, I wondered how Big Fish could be mounted in the relatively small pond that is its current home at the Greenhouse Theater Center, but that concern quickly dissipated. No space could confine the director Stephen Schellhardt and the creative team’s work. Every inch of the stage is used to advantage, empowered by rapid changes in locale that highlight Lauren M. Nichols’s scenic design. The Bloom family home, a flooded town in rural Alabama, a field full of witches, a cave hiding a giant? The continuous suspension of disbelief is readily overcome by a flawless collaboration of creative and technical skills for which the production team should win awards.

Running roughly two hours and 20 minutes of engaging fancy (with one intermission), Big Fish ends with reconciliation and understanding between father and son that is no less gut-punching for all its inevitability. The music stops and for one long moment of the production, all is still. I was not expecting the comforting community of weeping with strangers, united for that half-second in thoughts of our own complicated relationships with parents and children.

The best art can do this. It takes people outside themselves, connecting us with dreams, places and pieces of our humanity that sit below functional consciousness. BoHo Theatre’s production of Big Fish is a must-see that will reinvigorate any tired soul.