Top Posts
‘Company’ to Hit the Road on North American...
Meet the Full Cast of ‘Shucked,’ Coming to...
Full Cast for ‘Parade’ Announced
Stephen McKinley Henderson Gives the Performance of His...
The McKittrick Hotel Announces the Return of ‘The...
Broadway Stars Honored with Academy Award Nominations
Taylor Trensch, Danny Wolohan, and More Join the...
A Gay Road Trip Comes to The Brick...
Maude Apatow of ‘Euphoria’ is the Next Audrey...
Tony Award Winners to Star in ‘Hercules’ at...
Home Buzz Black Theatre Coalition Formed to End Industry’s Racial Inequalities
Buzz 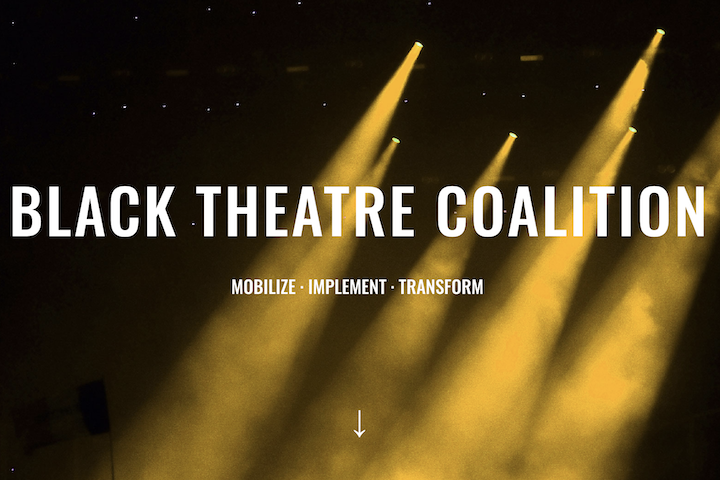 Co-founders T. Oliver Reid, Warren Adams, and Reginald “Reggie” Van Lee, along with Executive Director Afton Battle and Board Member Aaliytha Stevens, have announced the formation of the Black Theatre Coalition (BTC), a new organization aiming to build a sustainable, ethical roadmap to increase employment opportunities for Black theater professionals and eradicate the long-standing racial inequities in the American theater. Its stated goal is to increase work opportunities for Black theatre professionals by at least 500% by 2030.

Over the 154 years, since the very first Broadway musical (The Black Crook) premiered in 1866, the “Great White Way” has seen 3,002 musicals and 8,326 plays. Across all of these productions, there have been only ten Black directors of a musical (0.3%), 11 Black directors of a play (0.13%) and 17 Black choreographers of a musical (0.56%). All of this directly correlates to the fact that there have only ever been two Black lead producers of a musical (representing 0.06% of all Broadway musicals). Furthermore, the numbers for writers, composers, lighting, costume, sound, video, music contractors, musical directors, arrangers, orchestrators, hair/wig/makeup, casting, general management, stage management, company management, PR and marketing/advertising range from zero to five percent in each category.

In a joint statement, Mr. Reid, Mr. Adams, and Mr. Van Lee said, “Once we identified just how vast the disparity is between the perceived inclusivity on stage and the utter dearth of black professionals off stage, we began outlining ways in which we could address and ultimately eradicate this invisible imparity. This outline provided a clear path forward for our organization and our entire industry. It’s high time to end this ‘illusion of inclusion’ by reshaping the theatrical ecosystem for those who have been marginalized by systematically racist and biased power structures that have endured since the dawn of the American theater.”

Black Theatre Coalition is launching its inaugural program with three key steps to mobilize, implement and transform the American Theatre.

1. Mobilize
BTC has secured partnerships with top companies and professionals across every primary sector of the Broadway ecosystem, including producers, designers, directors, general managers, casting directors, press agents, advertising & marketing executives, booking agents, attorneys, and theater companies. These partnerships are critical to creating, building and implementing BTC’s sustainable program model.These non-Black accomplices have agreed to work with BTC to (1) identify Black candidates for employment in their offices, (2) implement paid intern and mentorship programs for Black Creatives, (3) create paid fellowships and/or create leadership positions in their offices and hire paid Black assistants on future Broadway projects. As an example, there are no Black General Managers working on Broadway.

However, when Broadway raises its curtains again, there will be four Black general managers employed in three management companies, a 400% increase of Black professionals, due to the partnerships that BTC has implemented.BTC is also establishing connection initiatives with colleges and universities to create a sustainable pipeline of Black graduates entering the workforce, as well as currently working black professionals who may have access to intern and apprenticeship opportunities for these graduates. We are working with sister organizations, Black Theatre United, Broadway Advocacy Coalition, Broadway Serves and others to share resources as needed.

2. Implement.
To support recruitment efforts and to provide a comprehensive repository, BTC is building a National database that intends to include every Black, behind-the-scenes theater professional in the United States. This database will serve as Broadway’s resource for locating, contacting and employing Black creatives and executives.

As an initial partnership, BTC and the producers of the Broadway revival of Sondheim’s Company have joined forces to implement ten paid positions as apprentices, from producorial to each creative design area, as the show goes back into rehearsals and through opening night. We hope to adopt this model with every Broadway show.

3. Transform.
Each year, BTC will present an annual Performance Series with three shows, including one original musical, one revival of a musical and one new play. This platform will feature works produced, created, designed and managed by Black artists and executives. This will ensure mentorship for Black theatre professionals at each stage of their careers while delivering powerful and engaging work. New York City will be our stage. As part of this transformation, BTC is honored to be partnered with acclaimed Jazz Impresario Wynton Marsalis from Jazz at Lincoln Center.

BTC encourages Black Theatre Professionals to add their information for the upcoming database by visiting their website.