Top Posts
‘Company’ to Hit the Road on North American...
Meet the Full Cast of ‘Shucked,’ Coming to...
Full Cast for ‘Parade’ Announced
Stephen McKinley Henderson Gives the Performance of His...
The McKittrick Hotel Announces the Return of ‘The...
Broadway Stars Honored with Academy Award Nominations
Taylor Trensch, Danny Wolohan, and More Join the...
A Gay Road Trip Comes to The Brick...
Maude Apatow of ‘Euphoria’ is the Next Audrey...
Tony Award Winners to Star in ‘Hercules’ at...
Home Beyond Broadway HALFWAY HANGUPS: ‘BLUE RIDGE’
Beyond BroadwayReviews 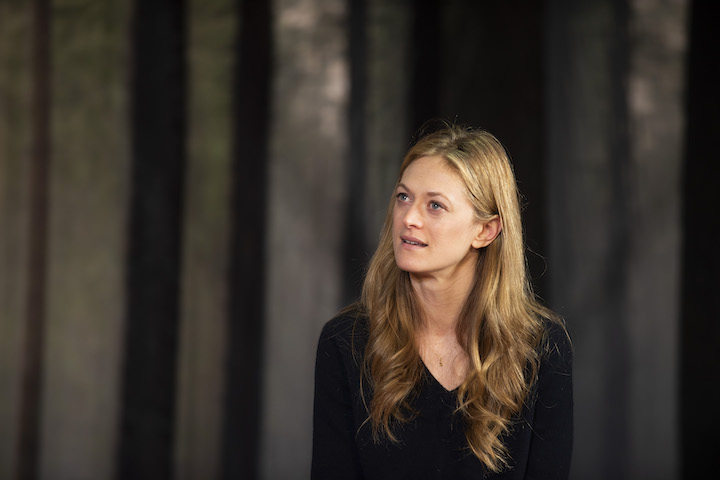 My first experience of a play by Abby Rosebrock was in 2013 when I saw Different Animals at the Cherry Lane’s studio space. She also played a leading role in it, impressing me enough to write that Rosebrock was “someone I’d be surprised isn’t heard of more often in the future.” She has, indeed, been heard from since, most conspicuously in the well-received Dido of Idaho at the Ensemble Studio Theatre. You can currently see her far-less noteworthy Blue Ridge in the prestigious environment of the Atlantic Theater Company’s Linda Gross Theater.

Marin Ireland (Classic Stage Company’s Summer and Smoke) doesn’t disappoint as Alison, a 30-something whose behavior may make some passionate #MeToo advocates scratch their heads. The role is another of the edgy, emotionally vulnerable, volatile women that have made Marin a New York theatre critics’ favorite.

When betrayed by the married principal with whom she was having an affair, Alison took an ax and gave his car some solid whacks. Diagnosed with IED (“intermittent explosive disorder”), she landed in a halfway house to work out her issues in a 12-step program including Bible study, part-time work, and volunteer community service. 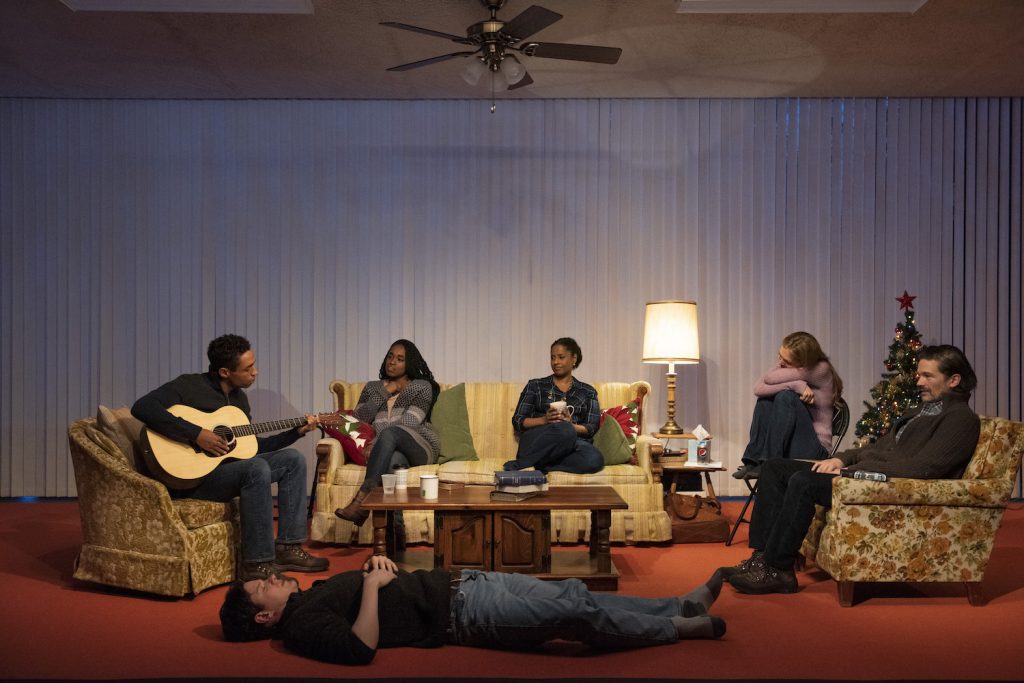 Apart from Blue Ridge’s final scene, all its action plays out in the overly spacious, dully furnished living room of a service house run by Hern (Christ Stack), an attractive white pastor, and his African-American, lesbian partner, Grace (Nicole Lewis). Alison’s co-residents, all totally into overcoming their hangups, are her roommate, the African-American Cherie (Kristolyn Lloyd), a French teacher and recovering alcoholic; Wade (Kyle Beltran), a guitar-strumming mulatto with a painkiller addiction; and Cole (Peter Mark Kendall), a quiet young man just out of a psychiatric institution. All are well performed, but none is sufficiently interesting to linger long after the curtain falls.

Blue Ridge, whose plot covers several months at the end of 2016, doesn’t spend much time investigating the specifics of each character’s history; it’s mainly concerned with the day-to-day lives and activities of the halfway house and its inhabitants’ increasingly fraught relationships. Conversations rise and fall around topics like racism, public versus homeschooling, the game “Tree or Stalin,” and homophobia.

The principal focus is given to Alison, who sees in every powerful man the potential for the abuse and degradation of women. When she suspects Hern, who has a girlfriend, of taking advantage of Cherie, Alison’s meddling enflames the hitherto torpid proceedings. Lessons—whatever they may be—are presumably to be learned all around.

A vague, epilogue-like scene set in a schoolroom ties up loose ends but by that time—over two hours after it began, with another 10 tacked on when I went because of computer problems—the play is too far gone for anyone to care.

The sense of intimacy that might have helped increase our concern is dissipated by Adam Rigg’s unusually wide and low-ceilinged room, backed entirely by vertical blinds. The arrangement seems designed so that the blinds can open for the final scene to reveal a forest landscape somehow meant to stand for a schoolroom, but the metaphor escapes me. The clumsy intrusion of visible stagehands to move things about is another failure of directorial and design ingenuity.

Blue Ridge makes frequent reference to The Sound of Music. If only Rosebrock’s Appalachian hills were alive with the sound of drama.