Top Posts
‘Company’ to Hit the Road on North American...
Meet the Full Cast of ‘Shucked,’ Coming to...
Full Cast for ‘Parade’ Announced
Stephen McKinley Henderson Gives the Performance of His...
The McKittrick Hotel Announces the Return of ‘The...
Broadway Stars Honored with Academy Award Nominations
Taylor Trensch, Danny Wolohan, and More Join the...
A Gay Road Trip Comes to The Brick...
Maude Apatow of ‘Euphoria’ is the Next Audrey...
Tony Award Winners to Star in ‘Hercules’ at...
Home Beyond Broadway Groove is in the Heart: ‘Bob & Carol & Ted & Alice’
Beyond BroadwayReviews 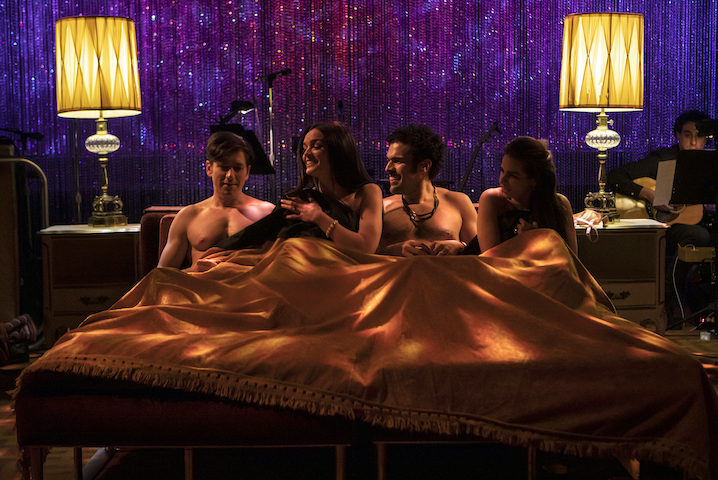 Toward the end of my last relationship, my boyfriend and I decided we would “open things up.” It was a terrible idea — one that further fractured an already crumbling co-existence. For the last decade of singledom, I’ve pondered — mostly hypothetically — if I could share the person that I hold dearest to my heart. Perhaps. But only if underscored with an undulating bossa nova beat. 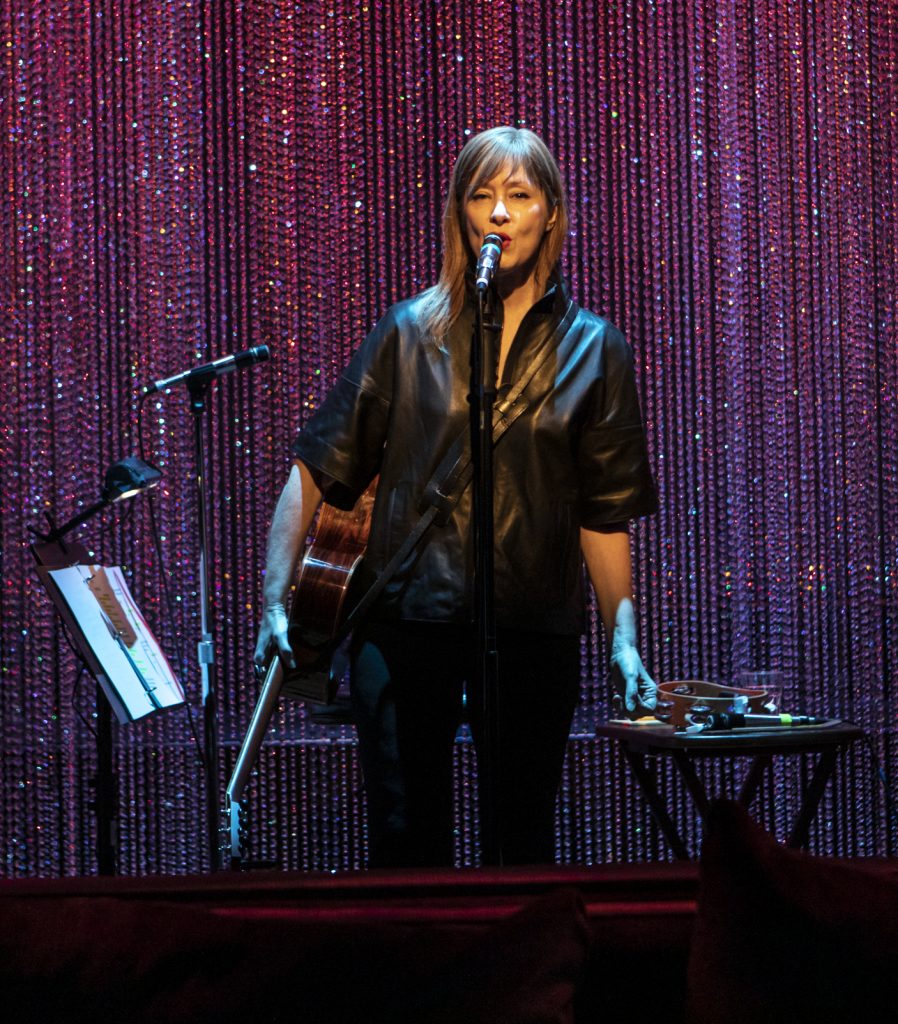 If I’m lucky, Grammy-winner Suzanne Vega will be lurking in the background, narrating the proceedings with an earthy, NPR tone. Maybe she’ll pick up a guitar or ding a few notes on a xylophone. Of course, I won’t look as good semi-naked as the four actors in Bob & Carol & Ted & Alice, but that’s okay. The fantasy lives solely in my mind, unlike the sexual revolution unfolding on stage at The Pershing Square Signature Center.

Inspired by Paul Mazursky’s 1969 film of the same name, Bob & Carol & Ted & Alice features a book by Jonathan Marc Sherman, music by Duncan Sheik (Spring Awakening, Alice by Heart), and lyrics by Sheik and Amanda Green (Kiss Me, Kate). We first meet documentarian Bob (Joél Pérez) and his wife Carol (Jennifer Damiano) en route to The Institute at Big Sur, home of the Human Potential Movement. They practice Tai Chi, get a couples’ massage and spend 24 hours in a marathon encounter group to let their “personality armor be dismantled.” Sleep-deprived, their inhibitions crumble, which sets in motion a reawakening of their marriage when they return home. 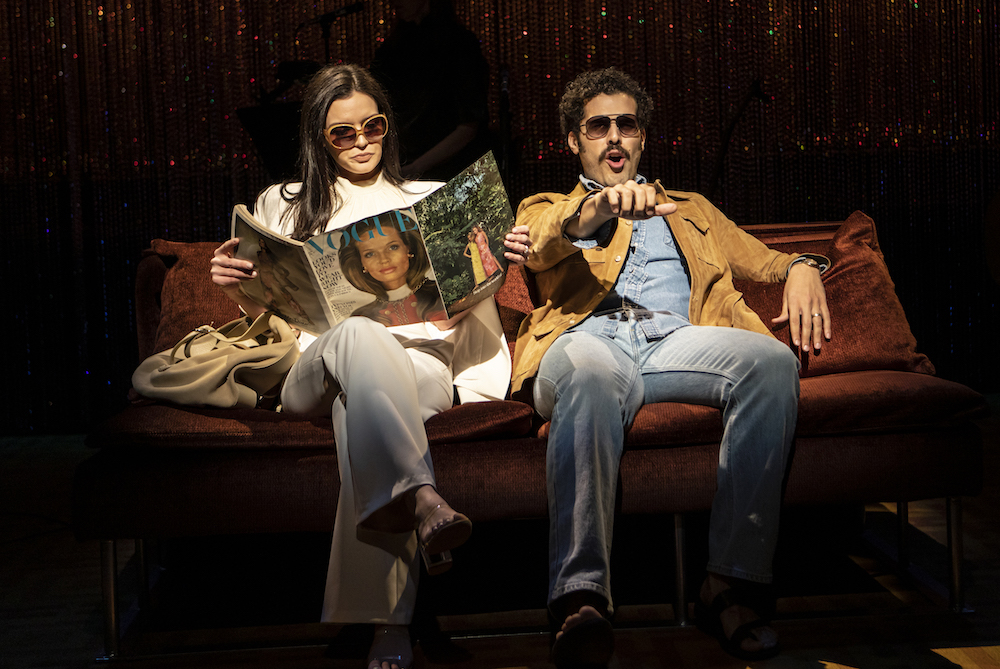 Infidelities ensue, and when Carol reveals the circumstances to the couple’s close friends, Ted (Michael Zegen, not unlike his recurring role as Midge’s ex-husband in The Marvelous Mrs. Maisel) and Alice (Ana Nogueira), debates of moral integrity simmer to the surface. Mazursky’s film had the benefit of the close-up to discern between satire and real moments of vulnerability. But even in the intimate Romulus Linney Courtyard Theatre, the fine line gets blurred under Scott Elliott’s direction. About an hour in, I felt as though that old relationship had been put on an indefinite loop. Such soundbites include (in no particular order, or very particular, depending on how you look at it):

“We’re not totally honest with each other,” says Bob.

“I think it’s difficult enough for us to maintain one sexual relationship at home,” says Ted. (Or me to anyone I’ve dated more than three months.)

“I’m experiencing myself from the inside, but I’m judging everybody else based on their outsides,” says Alice.

More than 50 years since the film’s release, this new musical retelling of Bob & Carol & Ted & Alice reminds us of our age-old struggles with monogamy. Sheik’s 60s-tinged score gives the framework a vintage stamp, as does the women’s subtly emerging sense of agency. Roe v. Wade is still four years away, yet there’s an underlying sense that societal shifts are resonating both in and out of the bedroom. Still, there’s so much style layered on Elliott’s production that it’s sometimes difficult to see through the herbal cigarette haze.

Sheik’s terrific arrangements, dusted with a hovering flute and rich melodies on the piano, come to life thanks to music director Jason Hart. Damiano, whose career since Next to Normal has weathered Spider-Man: Turn Off the Dark and American Psycho, best captures Sheik’s intent, reminiscent of a young Karen Carpenter sitting on the shoulder of Joni Mitchell’s effortless phrasing.

I’d rather listen to Bob & Carol & Ted & Alice as a concept album and strip away the staged pontifications on monogamy and fidelity. That should come as no surprise, I suppose, given my one futile attempt at a three-way where I ended up watching from the sidelines.