The cast of “The Heir Apparent” at Classic Stage Company (photo: Richard Termine) via The Broadway Blog.

Changes are in store for one of New York City’s preeminent classical theater companies. Brian Kulick will step down as the Artistic Director of Off-Broadway’s acclaimed Classic Stage Company following the current 2015-16 season. Kulick will be succeeded by the company’s current Associate Director, Tony Award-winner John Doyle, who will assume the position in July 2016.

Said Brian Kulick, “CSC is one of New York’s essential cultural institutions, and I’ve had the honor and good fortune to serve as its Artistic Director for the past 12 years. Thanks to the confluence of extraordinary artists, a devoted audience, a stellar staff, loyal funders and a dedicated board, CSC is well positioned for me to pass the baton so that I can devote more time to my own independent directing, my work at Columbia University and my ever-patient family. I am grateful to my friend and associate John Doyle, who will carry on the responsibilities of Artistic Director as of next season. I will stay on for that year as a consultant to make sure that John’s transition is a smooth one. After that I look forward to returning to 13th Street as an ardent audience member of one of our nation’s most intimate and electrifying theatrical spaces.” Kulick was named Classic Stage Company’s sixth Artistic Director in 2003. In its 48-year history, Mr Kulick’s length in tenure is second only to the Company’s founder Christopher Martin. While tripling the theater’s subscription base and general operating budget and substantially increasing CSC’s profile, Mr. Kulick also directed a dozen of the theater’s defining productions including Shakespeare’s The Tempest with Mandy Patinkin, Brecht’s Galileo with F. Murray Abraham, Ostrovsky’s The Forest with Dianne Wiest and commissioned and co-directed poet Anne Carson’s An Oresteia.

Kulick returned the theatre to its roots with critically acclaimed productions of Shakespeare and multi-year programs like the Chekhov and Brecht cycles. He instituted CSC’s popular Musical Theatre Initiative with productions of Sondheim’s Passion and Rodgers and Hammerstein’s Allegro (both directed by Doyle). He brought new work to CSC with such important writers as David Ives, whose Venus In Fur transferred to Broadway and received a Tony Award nomination for Best Play. He also created The Young Company, which brings Shakespeare to young and underserved audiences in all five boroughs of NYC.

Said Lynn Angelson, Chair of the Board: “All of us at CSC are grateful to Brian for the extraordinary range of classical work he brought to our Company and for the stellar teams of great actors and distinguished theater artists that he attracted to our stage. While we respect his decision to pursue his career beyond CSC, we look forward to the two productions he will lead in our upcoming season.  Brian will leave a legacy of established relationships with the New York theatre community. We are so fortunate that Brian introduced us to John Doyle several seasons ago, and thrilled to have John continue to build on those relationships and our expanded programming. The cast of “The Visit” (photo: Thom Kaine via The Broadway Blog.)

John Doyle joined CSC in 2013 as the company’s Associate Director. For CSC, he directed the highly-acclaimed productions of Stephen Sondheim’s Passion (2013, Drama Desk Nomination, Outstanding Director of a Musical) and Rodgers and Hammerstein’s Allegro (2014, Drama League Nomination, Best Revival of a Musical).

Said John Doyle, “I am delighted to have been invited by the board of CSC to become their next Artistic Director. To follow Brian Kulick’s remarkable tenure is an honor, as he has done so much to develop a challenging audience and repertoire. I look forward with gratitude to this new chapter in my relationship with the New York theatre community.” 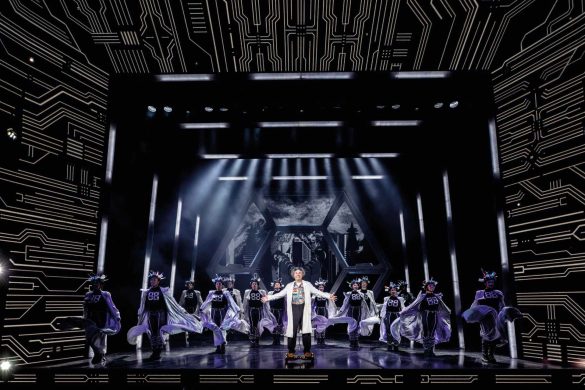