The 2011 Alliance Theatre Production of "Bring It On". Image via BringItOn.com.

Get your pom poms locked and loaded cause there’s a cheer war brewing! With the peptastic (and abstinence-minded) girls of Lysistrata Jones already heading to Broadway, the producers of the musical Bring It On (based on the popular series of cheerleader films) have decided to take their show on the road, starting October 30 in Los Angeles. Word was good following a recent trial run at the Alliance Theatre in Atlanta, so the decision to head out across the country might be seen as a surprising detour. However, like any good cheer squad, perhaps they’re looking to get the crowds fired up and build support for a win (and Broadway success) down the line.

So what’s their plan of attack creatively? Beyond the incredibly catchy film hook, Bring It On boasts some heavy artillery on the creative team. Let’s look at the roster:

Lin-Manuel Miranda (co-composer, co-lyricist): With a Tony and Grammy for In the Heights, he’s seen by many in the business as the great young hope fusing popular music styles with golden age musical comedy chops. And how many lyricists can say they got to rewrite Sondheim? He did by providing Spanish versions of some songs in the recent revival of West Side Story.

Tom Kitt (co-composer): He has a Pulitzer for Next to Normal. Need I say more? OK, he also happens to be one of the nicest, hardest working guys in the business; everyone in the industry is rooting for him to score again.

Amanda Green (co-lyricist): Daughter of music theater royalty, Adolph Green, she’s built a solid career as a writer and performer in her own right with some very interesting works in the pipeline waiting to break her through to the top tier (Hands on a Hardbody with Doug Wright is one to watch). Plus, she is hands down the funniest, bawdiest lyricist working today (yep, gauntlet was just thrown down).

Jeff Whitty (librettist): Avenue Q proved he can get the laughs and upend expectations. The recent run of Tales of the City showed he’s also got a talent for adapting difficult material and walking the line between heart and camp.

Yeah, I think that’s a team worth cheering about; I’m very curious to hear how the show looks in LA.

After the jump, let’s get a sneak peek at the show and some teasers from that “Gimme an A” list team… 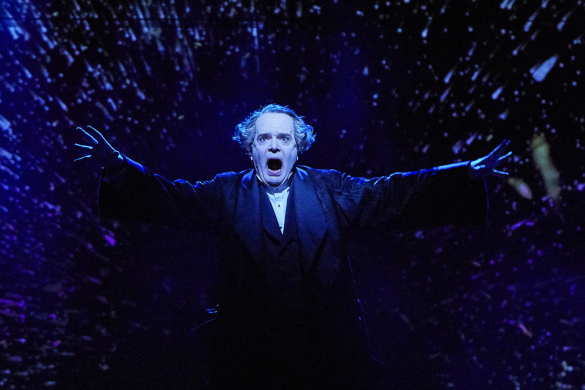