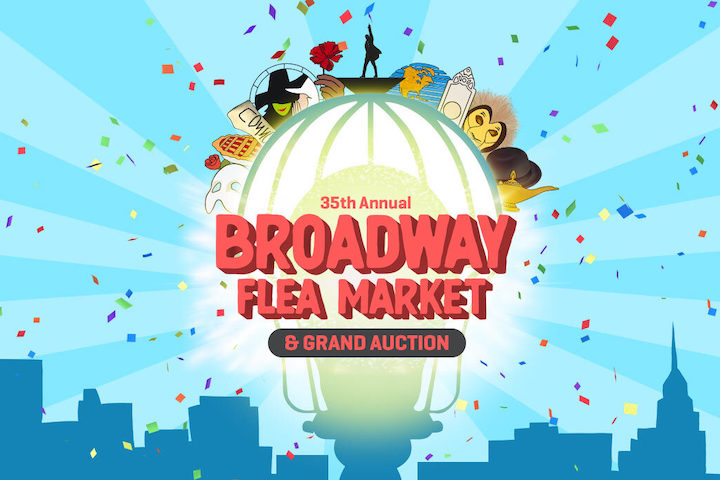 Celebrate the return of the live theater community on Sunday, October 3, 2021, when Broadway Cares/Equity Fights AIDS’ much-anticipated Broadway Flea Market & Grand Auction once again takes to the streets of New York City’s Theater District. This year’s edition will feature ways to participate both in-person and online, making the day a way for theater lovers worldwide to connect.

This year’s in-person event will again line Shubert Alley and West 44th and West 45th Streets, between Broadway and Eighth Avenue. The silent auction will set up shop in Shubert Alley starting at 10 a.m. The live auction, beginning at 5 p.m., will be held in the Times Square pedestrian plaza between West 45th and 46th Streets.

Fewer flea market tables will be featured this year to allow fans a little extra elbow room while still featuring the plethora of theater treasures that regular attendees have come to love and seek out.

“With so many of us cleaning out our closets and offices these last many months, the collection of unique theatrical keepsakes that will be on the tables and in our auctions is every theater lover’s dream,” Broadway Cares Executive Director Tom Viola said. “People have unearthed amazing items from Broadway’s recent and distant past. And, in turn, they’ve generously shared them with us. We are thrilled to continue seeing the love and support that this community has for each other be a part of the biggest day for Broadway fans.”

The Broadway Flea Market & Grand Auction helps fuel Broadway Cares’ support of The Actors Fund, helping everyone in entertainment and the performing arts, and more than 450 social and medical service organizations in all 50 states, Washington, D.C., and Puerto Rico.

All Broadway Cares staff and volunteers working the Broadway Flea Market & Grand Auction will be fully vaccinated and wearing masks. Everyone visiting the event is strongly encouraged to wear a mask regardless of vaccination status. Proof of vaccination and face coverings will be required for the live auction. The in-person event also will follow all other CDC, state and local COVID-19 safety protocols in effect at the time.

Among the initial shows that will be represented with merchandise at flea market tables are Aladdin, Freestyle Love Supreme, Frozen, Hamilton, The Little Mermaid and Mean Girls with more to come.

Silent auctions will be held throughout the day in Shubert Alley, hosted by Broadway favorites Todd Buonopane and Jennifer Cody. Every 30 minutes between 10 a.m. and 5 p.m., new sets of theater memorabilia will be offered for in-person bids. Silent auction lots are available online now for pre-bidding at broadwaycares.org/fleamarket. Among the treasures up for auction are:

The live auction, always a capstone to the in-person celebration, will occur at 5 p.m. in the Times Square pedestrian plaza between 45th and 46th Streets. The first lots available for pre-bidding in the live auction will be announced next week.

The fan-favorite Autograph Table and Photo Booth moves online again this year with one-on-one video chats with Broadway favorites. The video chats, similar to FaceTime calls and handled through the Looped app, will be between 11 a.m. and 4 p.m. Eastern. Participating guests will be announced soon.

Every dollar donated in person and online during the Broadway Flea Market & Grand Auction will help those across the country affected by HIV/AIDS, COVID-19, and other critical illnesses receive healthy meals, lifesaving medication, emergency financial assistance, housing, counseling and more.