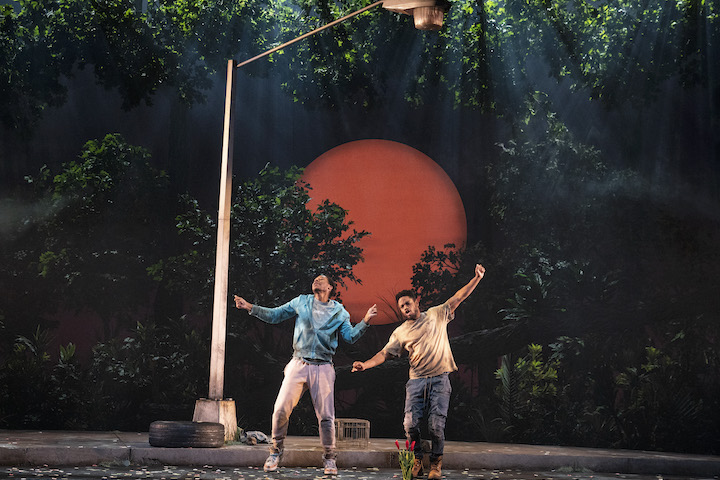 As Broadway reopens, it seems fitting that the first new play, Pass Over, tackles issues of plague, isolation, and racism we all weathered in the pandemic. Certainly, it is fitting that this intense, intermission-less (mostly) two-hander by award-winning writer Antoinette Chinonye Nwandu plays in The August Wilson Theatre, named for the prolific playwright of color who requested no white directors head major productions of his work.

So, after offering proof of vaccination and photo ID, donning a face mask, and passing through a metal detector, audience members take their seats, exhibiting a blend of exuberance over finally being back in the theater and trepidation over the potential dangers of the Delta strain.

The curtain opens on a desolate streetscape, littered with a wire milk crate, a truck tire and its separated rim, and a dented metal trash bin. Moses (Jon Michael Hill) awakes and begins talking shit, playing the dozens with his buddy Kitch (Namir Smallwood). The two pass their time dreaming of women, hot meals, and weed, but mostly of finding some way to “reach their full potential,” as Moses likes to say. They long to pass over from the cycle of poverty and violence in which they’re stuck. The dialogue is comedic, but the scenario is politically charged.

Each time the streetlights flash, they freeze, hands up and heart pounding, expecting the police. They make lists of the brothers, cousins, friends and strangers shot down by the ‘popo’ for being Black while walking. The list is very, very long.

Echoes of The Book of Exodus ring as both men make Top Ten Lists for The Promised Land, populated with dreams of brand-new Air Jordans and big gold chains, but also with things most take for granted: a house, a car, their family surrounding them, a woman to love, and a nice clean bed. It’s almost shaming to reckon with their lack.

There are obvious parallels between Pass Over and the absurdist classic Waiting for Godot, not least of all the use of repetition, call and response, and that endless waiting for something that will never come. As in Godot, there is a third wheel to this two-hander, but unlike in the Samuel Beckett farce, he is no Lucky. 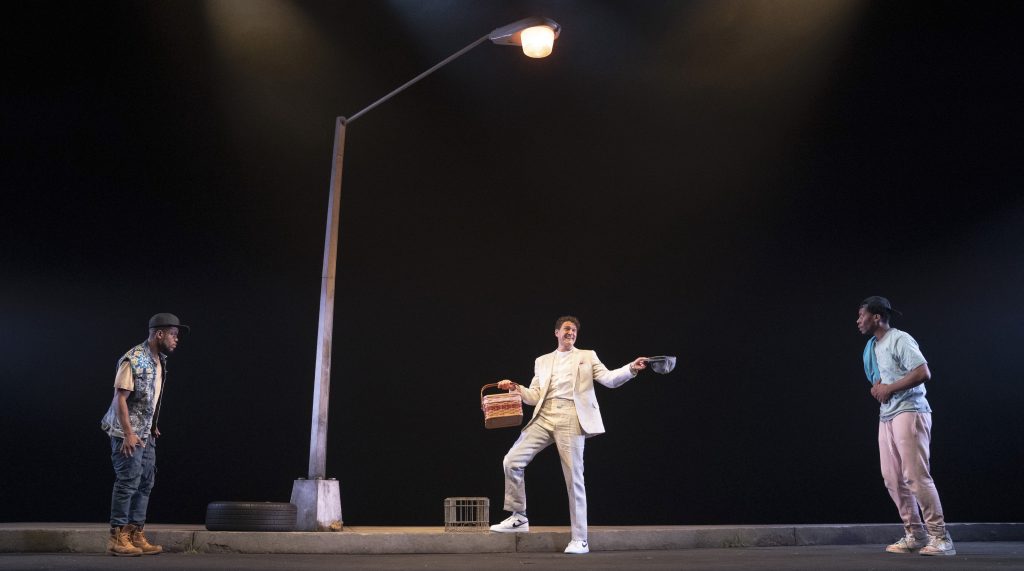 He’s a white man—literally dressed top to toe in white—carrying a picnic basket full of food and a mouth full of “gosh, gollies,” claiming to be lost on the way to mother’s house. And although it’s not without its share of humorous quirks, his arrival sends up red flags for both the characters and audience. Who is this man, and why has he wandered up this desolate block? Has his complacent privilege erased any sense of fear he might have, tarrying here in the middle of the night?

As in Godot, the man (Gabriel Ebert) carries the luggage, prostrates himself to lay out the meal, then performs a song on his ukulele. Moses and Kitsch provide harmony, but the symbolism is not lost: the men survive on his largess, which he quickly packs up when he decides they’ve had enough. All the men dance around, but it is the white man who chooses the tune. Good food turns to dust in their mouths when the man offers his name: Master.

Foolish talk turns offensive, fine humor fades, and they send the man away. But he returns, now cast as the local beat cop. The message is clear: that white man is this white man, is all white men. Moses and Kitsch first parrot the speechifying of their dinner companion, and Ossifer clocks them as “the good ones,” worth protecting. As soon as they slip up, the cop is frisking them, deriding them, putting them into their place as “lazy, stupid, thieving thugs.”

Somehow the men make it through the night but soon decide that the best route to pass over may be via the promised land of heaven. Moses looks up to the streetlight as a potential hanging spot, but as in Godot, the men have no rope. They determine to bash each other’s heads in with a big rock, logistics be damned. Ossifer arrives in time to deride the ‘black-on-black crime,’ and Kitsch just decides to lean in via “suicide by cop.”

The ending of Pass Over is a bit confusing and does contain some unexpected stage nudity and a few spoilers we won’t reveal here. Suffice it to say, you’ll leave the theater engaged, looking inward at preconceptions, but hopefully with some urgency to find a way to make things finally better, somehow.

Nwandu is known for works that hold a mirror up to society, to expose darkness as a means toward finding light. After our summer of Black Lives Matter protests and the beginning of a true reckoning for white folks to finally realize the extent of their privilege and accept responsibility for the carnage it has wrought, Pass Over, tough as it may be to watch, is exactly what Broadway needs.