Top Posts
‘Company’ to Hit the Road on North American...
Meet the Full Cast of ‘Shucked,’ Coming to...
Full Cast for ‘Parade’ Announced
Stephen McKinley Henderson Gives the Performance of His...
The McKittrick Hotel Announces the Return of ‘The...
Broadway Stars Honored with Academy Award Nominations
Taylor Trensch, Danny Wolohan, and More Join the...
A Gay Road Trip Comes to The Brick...
Maude Apatow of ‘Euphoria’ is the Next Audrey...
Tony Award Winners to Star in ‘Hercules’ at...
Home Reviews Broadway Review: Debra Messing in ‘Birthday Candles’
Reviews 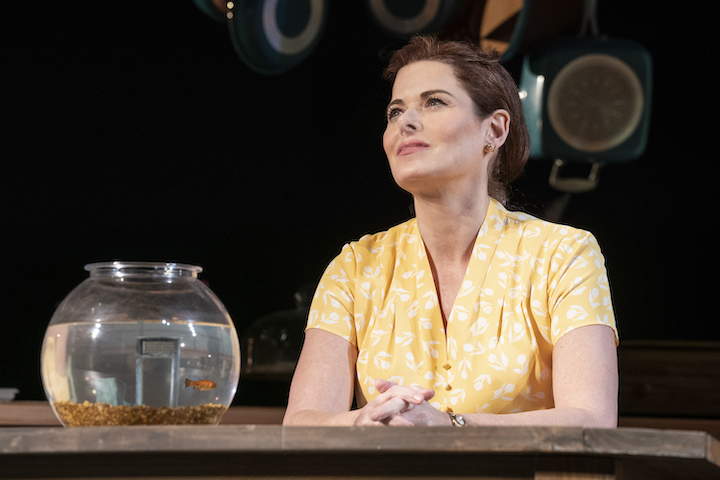 Life. A journey filled with heartache and happiness, tragedy and triumph. If you’re lucky enough to make it into your senior years in relatively good health, and with a reasonably comfortable income, it’s still unlikely you or your loved ones will not have suffered the slings and arrows of outrageous fortune. It happened to my own family only an hour or so after I returned from seeing the Roundabout Theatre’s worthy production of Noah Haidle’s endearing Birthday Candles at the American Airlines Theatre. While it’s painful to write this, it made me realize once again that, no matter how well things seem to be going, you can never take anything for granted.

Haidle’s play is a Thornton Wilder-like dramedy covering 90 years in the life of Ernestine (the luminous Debra Messing, Outside Mullingar), a woman whose life we follow on many of her birthdays, from 17 to 107. On each, she is seen making a birthday cake whose recipe she inherited from her grandmother; it’s a family ritual, just as is the perpetual measuring of family heights against a doorframe. For, just as in a Wilder play, the dramatist is concerned not merely with the quotidian events of our lives but their meaning and place in the universe we all inhabit.

Furthering the conceit is Ernestine’s replacement of a series of goldfishes whenever one dies. She receives the first for her 17th birthday, giving it the Sanskrit name Atman. This, says the gift-giver, her philosophical neighbor, Kenneth (Enrico Colantoni, in his charming Broadway debut), means “self. But not a personal self, but as the divinity within yourself.” Each Atman is numbered to designate its place both in Ernestine’s history and in the cosmos. In the end, Atman, the 103rd, swims placidly in his bowl. 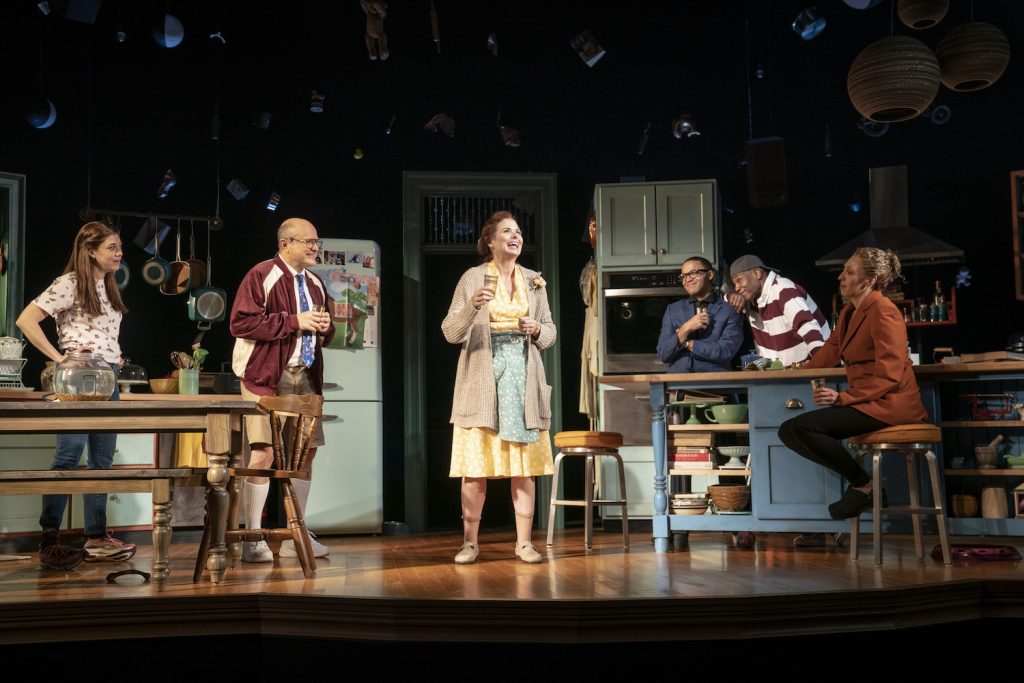 Such whimsical concerns are helpfully expressed by Christine Jones’s fanciful set. It ties the cosmos to mundanity by showing a wall-less kitchen over which hang, like a Milky Way of stars, a galaxy of familiar family items — toys, a guitar, a rocking chair, lamps, and so on — everyday things we take for granted but that define our existence.

Ernestine wears the same yellow housedress throughout, aging only in posture and vocal tone. On the other hand, her husband, children, grandchildren, great-grandchildren, and torch-bearing neighbor are differentiated by changes in what they’re wearing, thanks to the nonobtrusive costumes of Toni-Leslie James. All that’s needed to distinguish one age from another is a gentle “ding” from sound designer John Gromada and a delicate shift in Jen Schriever’s sensitive lighting.

There’s no question Birthday Candles is sentimental — perhaps the most common criticism the play has received — although the sentiment is more amusingly down-to-earth than schmaltzy and tearstained. There’s enough goodhearted humor sprinkled throughout to control excess emotion and prevent things from turning maudlin. One amiable example comes from the way Kenneth always enters Ernestine’s kitchen unseen, shocking both himself and her when she suddenly spots him only inches away. Watching this affectionate ritual evolve over time inspires one of the biggest laughs. 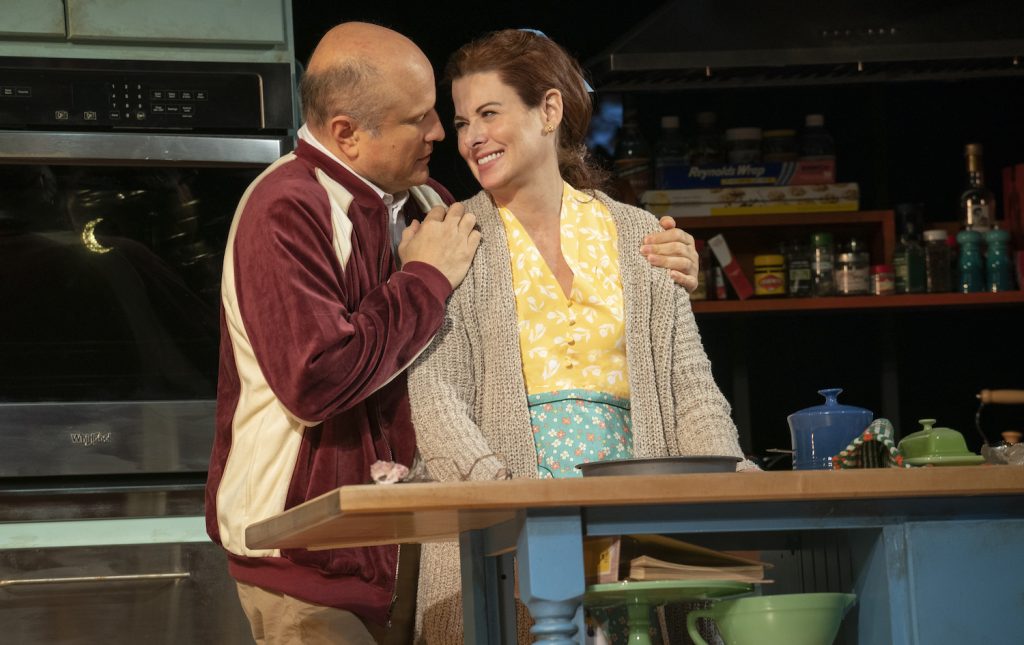 Ms. Messing, lovely and appealing, carries the play with deft aplomb. Her most apparent age differentiations are as the spunky 17-year-old, who keeps announcing that she is going “to surprise God” with her achievements, and the disoriented 107-year-old, intent on baking one more cake, even though others now live in her family home. Ms. Messing’s centenarian Ernestine is perhaps too clichéd vocally, but this excellent actress nevertheless plays her with enough truthful consistency to make the improbable seem probable.

Mr. Colantoni, as the fellow with a lifelong crush on the diffident Ernestine, is a warm and subtle swain. John Earl Jenks as Matt, Ernestine’s first husband, similarly occupies the stage with ease and honesty.

Each of the family members — the women, nicely played by Susannah Flood and Crystal Finn — has their quirks, but most characters are only briefly sketched as the years slide by, and we must listen closely to identify who’s who from hints dropped in the dialogue. So many years are covered that, late in the play, when we recognize someone we first met as a teen who is now suffering the debilities of age, it’s impossible to resist the moment’s poignancy.

Birthday Candles is a rich confection for a middlebrow Broadway audience, particularly one of a certain generation, layered with accessible philosophical concerns, and frosted, not with earthshaking catastrophes, but with the kind of characters and situations — happy and sad — most of us contend with in our daily lives. Directed with sweet warmth by Vivien Benesch, who staged its premiere at the Detroit Public Theatre, Birthday Candles presents 90 years in 90 minutes, crafting a loving silhouette of a life well lived.