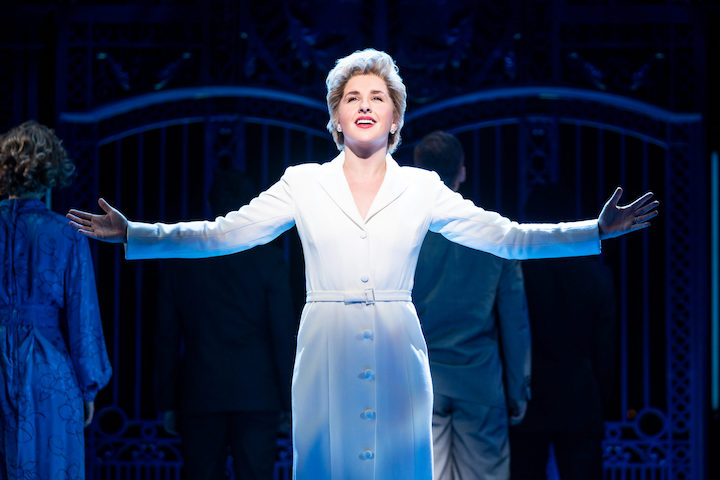 Few tales have captivated the masses more than the story of tender young Diana Spencer being swept away by Prince Charles in a fairytale wedding. But watching the actual story of the marriage of the Prince and Princess of Wales as relayed in Broadway’s Diana: The Musical turns out to be a royal pain in the ass.

This is despite that there’s no shortage of talent on hand. For starters, there’s Charles, played by Roe Hartrampf. He’s a solid actor and handsome to boot. Unfortunately, the play seems intent on quickly establishing what a monumental twat his character is. When we see Charles in a very early scene calmly discussing with his lover, Camilla Bowles (an excellent Erin Davie), finding a naïve young woman to marry him, that bit of mischief is managed. Later, his petty jealousy over Diana’s easy way with the people wholly cements his utter unlikability.

Then we have young Diana, played by Jeanna de Waal, who appears in nearly every scene and somehow manages to remain fresh-faced as she delivers some of the banalest lines to ever grace the Longacre Theatre. She marries Charles despite a warning from her sister Sarah (a genial and steady Holly Ann Butler), who had dated the royal prick first. She even faces the gimlet eye of Queen Elizabeth, played to her stodgy fullness by the still very talented Judy Kaye. Nice work if you can get it—unless the job comes with so many built-in pitfalls. 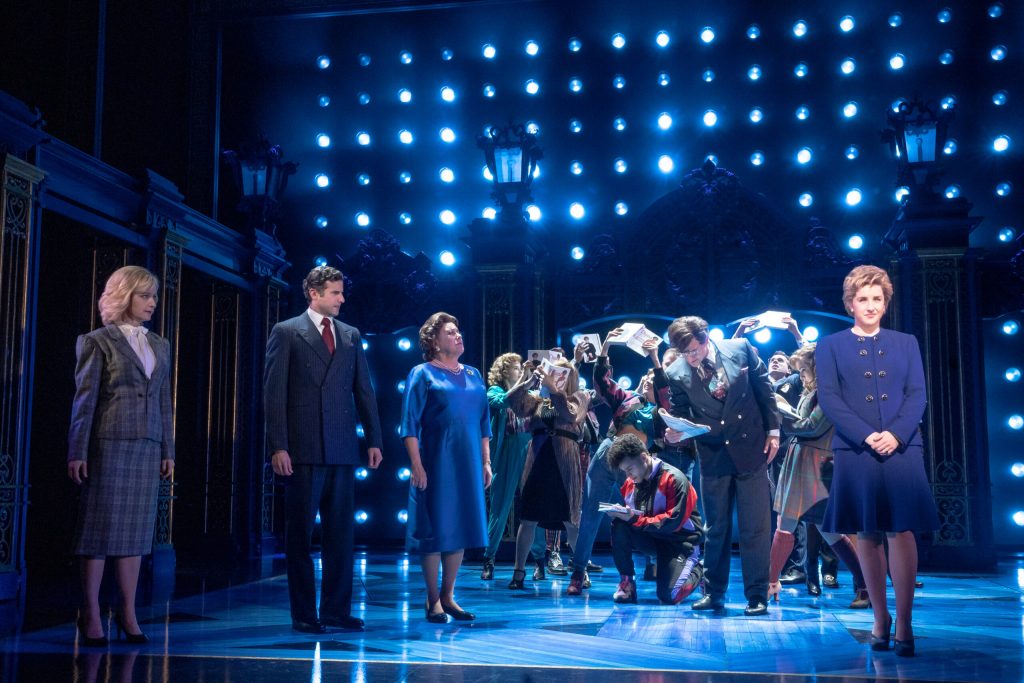 The cast of ‘Diana: The Musical.’ (Photo: Matthew Murphy)

No surfeit of talent can overcome the insipid book and lyrics by Joe DiPietro and music and lyrics by David Bryan. The play seems intent on exploiting the highs and lows of the life of Diana while simultaneously never scratching beyond the surface of her humanity. And it does so with the lowest common denominator of song quality.

Both the lyrics and dialogue are generally dreadful, sometimes to the point of physical recoil. One wonders if a drunken teenager wrote the entire score with a bottle of Jägermeister in one hand and a thesaurus in another. The rubric for the songs seems to be merely appropriate end rhyme; at one point, the paparazzi sings about the spectacle being better than having a wank, because you can nab a snapshot to take to the bank. Sadly, that low caliber of lyric is representative of the entire lot.

And there is just so much of it. The show features 25 songs (and a few reprises), which starts like a shot the second the curtain rises with Diana singing “Underestimated.” From there, the singing is relentless. There aren’t more than a few lines of unsung dialogue between each number, and they are all so bloody awful.

Nothing seems verboten, with no bar too low to cross. Strangely enough, however, if the entire show had been intended as a caustic rip at the royal family presented tongue-in-cheek, it would be brilliant. But, unfortunately, DiPietro and Bryan have the bad luck of taking themselves seriously.

That the actual story unfolded in the ‘80s is one of the show’s only saving graces, although that’s not to say that the decade saves it. At several points in the show, ‘80s-era dance and fashion montages release some pressure.

Early on, we see Diana daydreaming her way through a boring opera with Charles by imagining punk rockers instead, in a number titled, “This is How Your People Dance.” Given that Diana was already a descendent of English and Scottish royals, the concept of “your people” is a bit of a laugh, but one we’ll allow. Diana pops out two sons during one song, but even that doesn’t mollify Charles. Later on, there’s some fun when they revive that timeworn ‘80s-movie classic fashion-change montage, when we see Diana cycle through the stunning Dior fashions she embraces after ditching the yoke-front prairie dresses the Queen favors.

But this fun comes to a screeching halt when Prince Charles finally goes on the telly to tell the world about the end of his marriage to his suicidal harpy of a wife and his unending love for (married) childhood friend, Camilla. By this point, any sympathy one might have had for Charles—a man trapped by his royal birth into sidelining the love of his life for years—is completely gone with the Windsor.

At this very point, at the urging of her butler Paul (Anthony Murphy), she responds by glitzing up in her sexiest little black dress and going out on the town, to be seen not giving a fuck. And that’s the song that goes beyond the pale: “The Dress.” He’s suggested she wear her fuck-you dress. Her “fuckity-fuckity-fuckity-fuck-you-dress.” Kudos to Murphy for nabbing this Broadway belter because he sings his heart out, but his bad luck that the song is so embarrassingly awful. 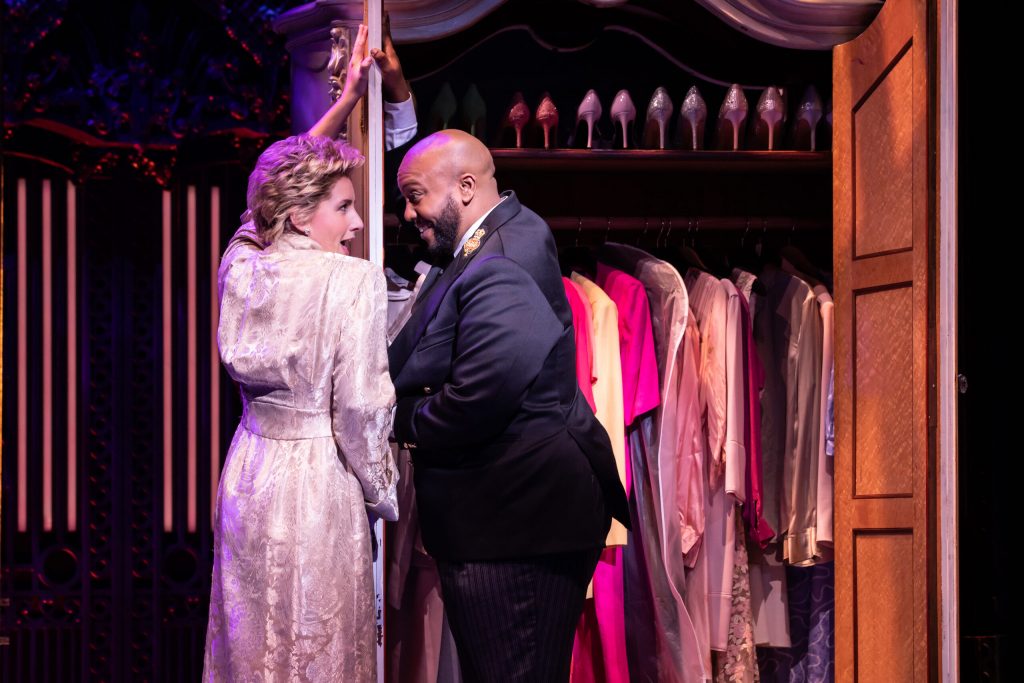 The show crams in love letters to randy war hero Diana’s lover James Hewitt and a somehow inexplicable ode to Andrew Morton, who is writing an unauthorized biography of her life (“The Words Came Pouring Out”) that enraptures the common folk.

The two-plus-hour show comes to an end predictably after the paparazzi-induced car crash in Paris’s Pont de L’Alma tunnel. But if we’re being honest, the whole thing is a car crash. And like the biggest of wrecks, one cannot look away. Despite the naysaying of pesky theater critics who have seen enough shows to separate the gold from the dross, the audience seemed to gobble it up.

After a long COVID lockdown, seeing a show have such an extensive cast was heartening, in that many Broadway actors have gotten back to work. But thanks to the low quality of this show, unsavable even by the high quality of these earnest actors’ talents, they may again soon find themselves pounding the lines at casting calls. Here’s hoping their next gig won’t be such a royal mess.