Top Posts
‘Company’ to Hit the Road on North American...
Meet the Full Cast of ‘Shucked,’ Coming to...
Full Cast for ‘Parade’ Announced
Stephen McKinley Henderson Gives the Performance of His...
The McKittrick Hotel Announces the Return of ‘The...
Broadway Stars Honored with Academy Award Nominations
Taylor Trensch, Danny Wolohan, and More Join the...
A Gay Road Trip Comes to The Brick...
Maude Apatow of ‘Euphoria’ is the Next Audrey...
Tony Award Winners to Star in ‘Hercules’ at...
Home Show Folk Insta-Broadway! 7 Stars Lighting Up Social Media
Show Folk 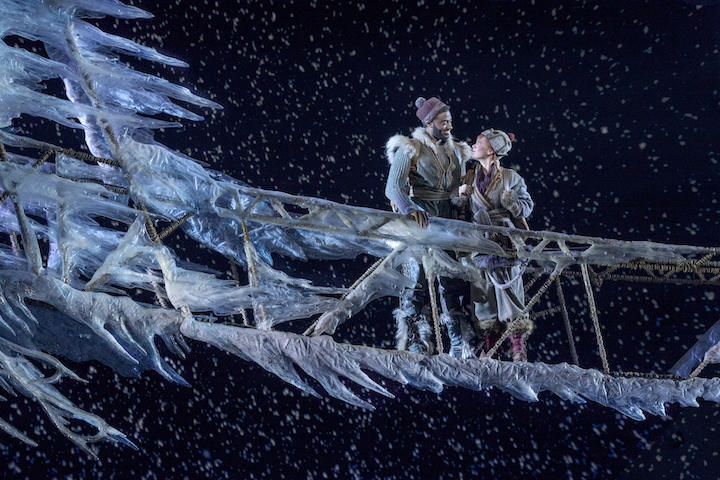 Want more of the Broadway stars that you love? Their Instagram feeds are full of backstage moments, personal memories, and shout-outs for causes and issues that they support. Here are seven of our favorites:

Patti Murin
Currently the bubbly Anna in Frozen on Broadway, Murin is just as bubbly on social media. But she’s also incredibly authentic, inviting followers to share in her personal struggles and triumphs. Murin’s honest depictions of her mental health provide inspiration and encouragement — plus, she’s friends with the current star of The Bachelor, Colton Underwood, so we’re bound to see some fun selfies in the months to come.

George Salazar
The Be More Chill star reps his signature hairband and his enthusiasm for the Broadway-bound show in his Instagram feed. He’s not afraid to be silly or ham it up with the show’s composer Joe Iconis, but also uses the platform for causes that are important to him, such as #BeltTheVote and the Trans LifeLine, the first transgender suicide hotline in the U.S.

Betty Buckley
Betty Buckley, currently starring as Dolly Levi in the national tour of Hello, Dolly!, proves that social media isn’t just for millennials and Gen Z’ers. Her Instagram is an entertaining mash-up of the Tony Award winner‘s life on the road as well as raves and rants surrounding the current political climate and the occasional guest appearance by her dog, Lucas.

Lucas is back from “Boarding School”. He & Cathy’s @blbpa dog Dylan went to Lucas’s trainer Jeff Minder @toptierk9 who worked with both dogs for the past month. So happy the boys are back home. Thanks to Ashley Blue & Emily Rouse for making the drive to Texas to bring them home to the #blbranch. 😍🐕🐺

Hailey Kilgore
Most recently appearing as Ti Moune in Once On This Island, Kilgore’s feed is both invigorating and down to earth. She showed a lot of cast love for the show, which recently closed, as well as cross-Broadway friendships with stars like Jelani Alladin, currently Kristoff in Frozen. Teaser: we’ll hopefully see some live feed from her first show at Feinstein’s/54 Below on January 30.

Happy New Year everyone!! I am so excited to announce my FIRST 54 Below Show!! I really wanted to open up and help people get to know Hailey. All my life I have been introduced to so many different artists and sounds. January 30th 9:30pm tickets on sale now at 54below.com Thank you so much to @yael.silver, @tedrarthur, and OF COURSE @54below!❤️♥️❤️♥️❤️♥️❤️♥️❤️ Photo credit goes to: @broadwaycom @emiliomk

Bryan Cranston
Hollywood and Broadway collide in Bryan Cranston’s knockout performance in Network. The Breaking Bad actor has a whopping one million followers on Instagram, who will discover an occasional selfie, but more often than not, social causes such as a call to end to gun violence and voter suppression.

Just a couple weeks ago I was dreaming of a white Christmas… Hope you all have a wonderful Christmas, and for those who don’t celebrate it, have a relaxing couple of days. This year my Christmas wish is for a more compassionate world, and a more congenial America… that’s not asking a lot. Kindness is contagious. May you be blessed with good health, Bryan #christmas #kindness #happyholidays

Audra McDonald
The six-time Tony winner has an Instagram that could belong to your best friend’s mom. (If your best friend’s mom was an immensely talented Broadway legend with a terrific sense of humor.) Full of videos and family photos, McDonald reminds us that actors are real people, too!

Jelani Alladin
The Kristoff to Murin’s Anna in Frozen, Alladin has a dynamic Instagram that shows pride for his work and love for the cast and people around him. Among professional photographs that could be plucked from a modeling agency’s lookbook and poses with friends, followers will also discover equal parts heart and soul. His dignified response to a comment regarding multicultural casting (a long tradition for Disney Theatrical) resonated with fans around the world.
https://www.instagram.com/p/BsAiwzJB1Cv/?utm_source=ig_web_copy_link