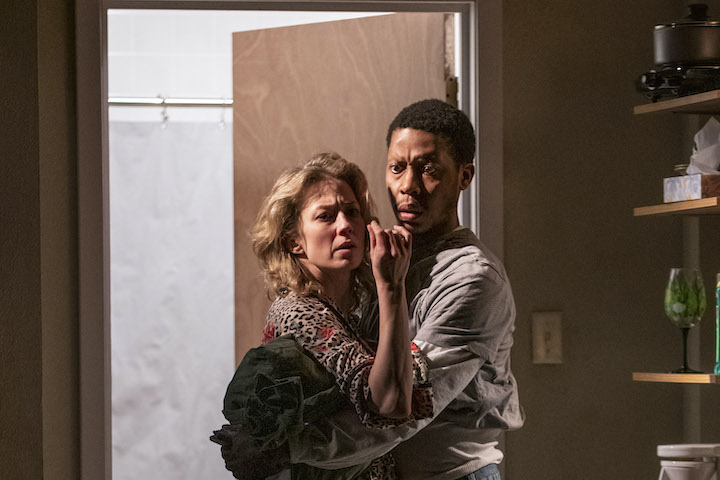 Bug might as well be called Human. Crawling critters aside, Tracy Letts’s cult classic is, at its core, about our basest instincts. No matter their place in the world, everyone just wants to be loved. To be cherished. To be heard. When that happens, other base instincts can come into play: Sex. Paranoia. Blindly following the one who listened to you when no one else would.

Letts is a Steppenwolf ensemble member as well as a well-known character actor and Pulitzer Prize-winning playwright (August: Osage County). Bug has been staged all over the world in theaters big and small: the latter lends itself to the show’s claustrophobic feeling. But this production is unique: not only is it the Steppenwolf premiere of Bug, directed by the legendary David Cromer (The Sound Inside, The Waverly Gallery), it also stars Letts’s wife, Carrie Coon (also an ensemble member and perhaps best known for her debut film turn in 2014’s Gone Girl). Can Bug’s intimate gaze at love, paranoia and conspiracy theory translate to Steppenwolf’s large Downstairs Theatre? The answer is a resounding, very creeped-out “yes.”

Coon plays Agnes White, a woman with a past whose present life is very small. By day she’s a server at an Oklahoma honky-tonk, by night she drinks, smokes and snorts in the seedy hotel room she calls home. One night, Agnes’s coworker R.C. (Jennifer Egstrom, perfectly channeling the hardscrabble rural queer woman) brings over the quiet and mysterious Peter Evans (Namir Smallwood), whose past involves deserting the military due to unnecessary and traumatic medical testing. Soon the two consummate their passion. Shortly after, Peter sees a bug. It’s not long before the microscopes and tinfoil come out, as Agnes and Peter shield themselves against a world that’s never welcomed them, trying to contain the insects that want them all too much.

Letts’s script inspires uncomfortable laughs as Agnes and Peter’s behavior increases in absurdity. But thanks to the playwright’s deft characterization and Cromer’s stellar vision, the two come across as deeply, darkly real. None of us are far from their situation, really: one stroke of bad luck, one abusive partner or one experimentation with drugs could land us where they are: drifting, desperate and grasping for someone, anyone who shows us kindness. When I laughed, it was the kind of squeamish chuckle, wondering if, or when, that would happen to me. 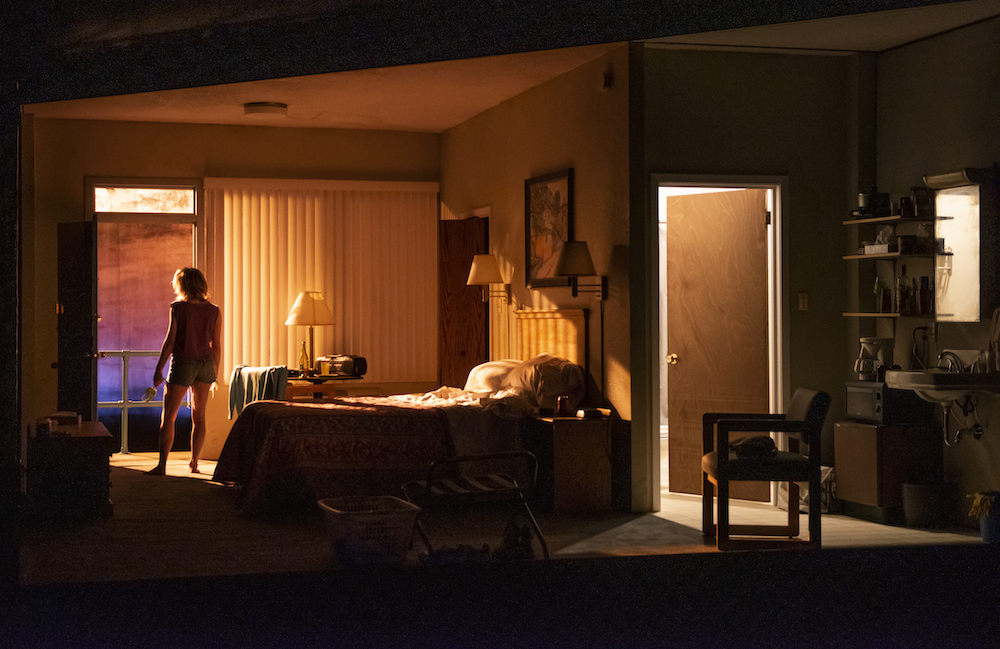 As for Bug’s required sense of claustrophobia, scenic designer Takeshi Kata takes an innovative approach to scale the Downstairs Theatre. Agnes’s hotel room is appropriately sized, with blinds only giving a hint of natural light, a door where footsteps are ominously visible and a sink with small shelves teeming with liquor bottles. The shadow box effect offers an uncomfortably intimate gaze into a day-to-day existence that steadily grows more frightening. Plastic wrap (the kind environmentalists warn us about) surrounds the hotel room. Watching Agnes and Peter, it’s easy to imagine being sealed off in a place where nothing can get in or out, the wrap tightening as their mindsets shrink.

Smallwood is beautifully cast: his Peter is intelligent and magnetic, with an almost childlike, wide-eyed gaze that narrows along with his focus on the bugs he’s convinced live inside him. He creates a palpable chemistry with Coon, whose Agnes is nothing short of a revelation. Growing up, I knew women exactly like her, scraping by while trying to maintain their sanity in whatever way possible. Coon carries that authenticity through every tired glance at her painted wine glass, every tug of a dirty shirt over her head and every drawled syllable. Performances, direction and script all contribute to Bug’s most genius attribute: its innate ability to keep the audience questioning what they know and see.

As we sat on the train after the show, my guest said to me, “for a minute, I almost believed [spoiler] was real.” I turned to him, disbelieving, and said, “wasn’t it, though?”