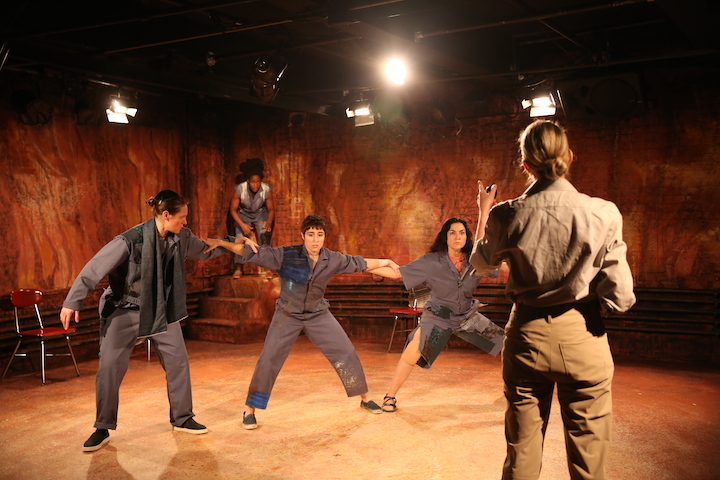 Julian Christopher’s ambitious Bundle of Sticks places the subject of gay conversion therapy in the remote town of Coober Pedy, Australia. Still, its themes of self-love and empowerment in the face of radical discrimination reverberate close to home.

More states are finally banning the practice (Virginia being the most recent), which falsely claims to change a person’s sexual orientation or gender identity or expression. But for the recently arrived men at The Sticks Global Conversion facility, the nightmare has just begun.

Christopher’s theatrical convention dictates a diverse cast of women, transgender and/or non-binary performers, swapping out full-frontal nudity with flesh-toned bodysuits and soft-sculpture phalluses (designed by Meghan E. Healey). The effect, in combination with Harbour Edney’s lighting and Jesse Mandapat’s sound design, creates an other-worldly, transcendent quality, not unlike (but with much less budget) Taylor Mac’s recent Gary: A Sequel to Titus Andronicus.

The characters, named as an acronym for “FAGGOT,” range from Francisco (Melissa Navia), who desperately wants to convert, to Tyree (Hope Ward), who has only arrived to save his relationship with Gemi (Zo Tipp). Extremist (and closeted) Otto (Laura Jordan) runs the facility, putting his attendees through a variety of abusive exercises, trying to break their homosexual tendencies.

Director Lou Moreno has assembled a talented cast who each discovers moments of vulnerability, culminating in communal emancipation as they wail “Faggot!” in an adrenaline-fueled proclamation, but it’s the flashback scenes in which the men confront their simmering sexual truths that most resonate: Abram (Fleece), a Russian Bukahrian Jew questioned by his wife with the stifling air of relationship on the verge of collapse; Gregos (Lucille Duncan), struggling to muster sexual attraction toward his fiancée. Moreno’s pacing occasionally lags, though the intermittent appearances of a phallic rainbow serpent (mask construction by Dinah Gumns) add an air of the fantastical. Humor, too, seems distant from the men at Coober Pedy, missing opportunities in Christopher’s tone-shifting script.

Raw and with moments of imagination, Bundle of Sticks could afford to stylistically dive deeper into its author’s wild imagination. For now, there are sparks but little fire.