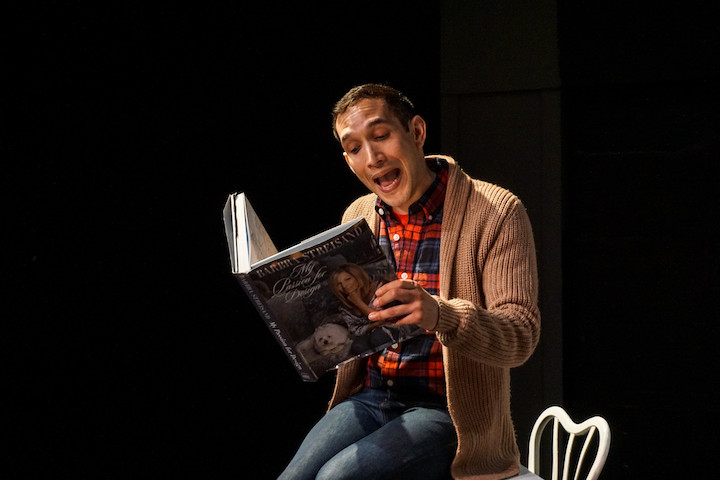 It’s the Year of Chicago Theatre!
Check out some of our favorite picks of the season. CLICK HERE!

Casting can make or break a show. In the case of Pride Film & Play’s production of the Off-Broadway hit, Buyer & Cellar, the proof is in the welcomed jolt delivered by Emmy Award-winner Scott Gryder.

Never mind the unnecessary marketing ploy — those statues (though well-earned) were for Outstanding Makeup. Jonathan Tolin’s poignant, surprisingly existential and downright hilarious play exemplifies what can happen when uniting the right material with a well-suited star.

Set in a basement curio shop, it’s here we find Alex More, (Mr. Gryder), an underemployed L.A. actor who’s taken an unusual job. He’s been hired to manage the pre-fabricated mall in the nether regions of Barbra Streisand’s Malibu estate, running the frozen yogurt machine and dusting the dolls, among other mundane tasks. The mall’s only customer is Babs herself, in need of periodic “normalcy.” And the single employee in Ms. Streisand’s land of make-believe is Alex.

The work’s title muses on the multiple meanings of “buyer/buying” and “cellar/selling.” For in two senses, Alex and Barbra are engaging in transactions with one another. By creditably creating a pedestrian experience for the lonely rich woman who has everything, Alex is selling Barbra more than her own goods, even as he willfully purchases the fantasy of theirs as a sustainable friendship of equals. In the cellar, Barbra Streisand walks through the souvenirs of her storied career with Alex and indulges safe opportunity to be vulnerable. The dynamic is complex and intriguing.

Meanwhile, Ms. Streisand sells Alex eight hours a day of escapism – from his frustrated ambitions, underperforming romance, and suspicions of self-ordinariness. This happens as she quite guilelessly invests in the idea of Alex as somehow different than her other employees. Barbra ignores the unseen lines that must always exist between boss and the hired help, with emotional and financial consequences that are certain to cause Alex the greater pain.

That all of these dynamics are so meticulously explored in under two hours (100 minutes, no intermission), with animation and humor in abundance, is all credit to the performance of Mr. Gryder. The actor gives everything to his rendering of three fully realized characters (Alex, Barbra Streisand and Alex’s judgy boyfriend, a finance professional working outside the “business”), as well as several supporting roles, and never lets the audience see him sweat. 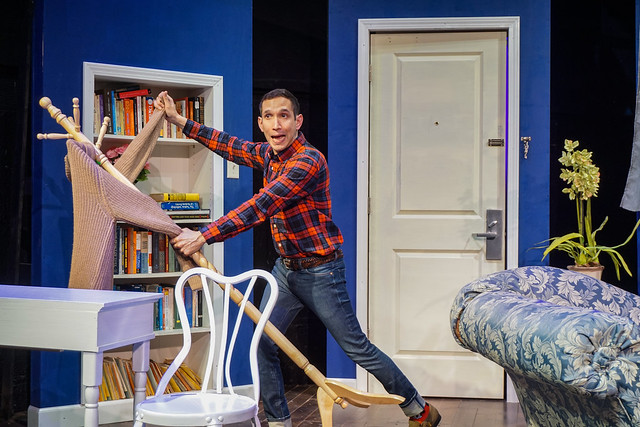 Mr. Gryder’s performance is a full body experience, and when he becomes Barbra Streisand, I swear you can see and hear her, no drag required. The performer’s clearly committed study of the legend allows him to generously share her weaknesses. His Barbra is a human being, even as it’s clear that she literally lives in another, unreachable world. Likewise, Gryder’s Alex is more than an opportunistic gay fanboy. He’s in search of meaning and connection, which takes a detour around the unused, impeccably appointed façade of a one-woman industry. Mr. Gryder wrings every last chuckle out of a captivated audience, yet stops deftly short of caricature, managing to make us laugh through a gossamer web of sadness.

In the end, every person is left with themselves, transacting with the world in hope, frustration and more than a little fantasy. Pride Films and Plays’ production of Buyer & Cellar leaves audiences wanting more, in all the best ways.