Top Posts
Review: ‘& Juliet’ Is A Daffy, Absurdly Joyous...
Jinkx Monsoon & BenDeLaCreme’s ‘The Jinkx & DeLa...
Review: Victoria Clark Shines in the Refreshingly Original...
Review: Mike Birbiglia Astounds in ‘The Old Man...
A Sondheim Stocking Stuffer: New Book Offers Insightful...
From ‘Tattooed Lady’ to ‘KPOP,’ Plus A Quick...
Museum of Broadway Will Open Its Doors November...
Previews Have Begun for One-Man ‘A Christmas Carol’...
Strong Performances Aren’t Enough to Save ‘Almost Famous’
‘Kinky Boots’ Will Close After Off-Broadway Return
Home Beyond Broadway Excavating Shaw But Leaving Nothing Behind: ‘Caesar and Cleopatra’
Beyond BroadwayReviews 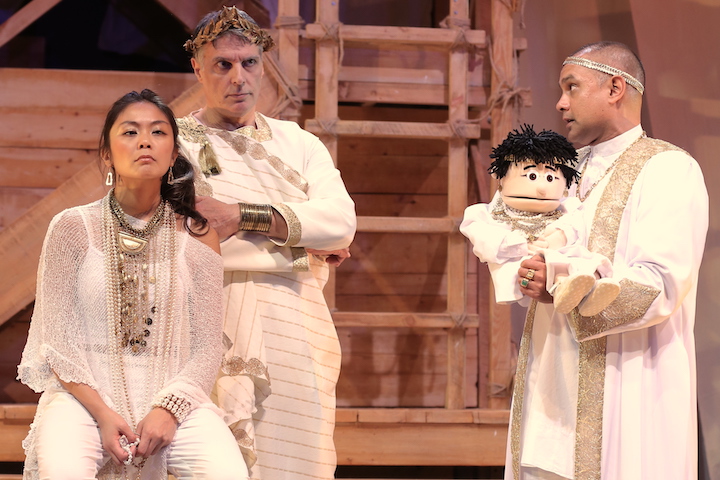 George Bernard Shaw was notoriously picky about productions of his plays, as witness the commentary of Theatre Guild co-founder Lawrence Langner in his memoir, G.B.S. and the Lunatic. One can only wonder at Shaw’s reaction to the barebones revival now being given his expansive historical comedy, Caesar and Cleopatra, radically adapted for seven actors by director David Staller for the Gingold Theatrical Group (Heartbreak House), go-to specialists in all things Shaw.

Not that Shaw himself was averse to radical tinkering. Simply go to YouTube and, with the script in your hand, watch the spectacular 1945 movie version, starring Claude Rains and Vivien Leigh, to see how heftily Shaw altered his original. Written in 1898, first fully produced in Berlin in 1906, followed by its New York premiere in 1906 (not 1907, as stated in the program), Caesar and Cleopatra is typically given sumptuous, even monumental, stagings set in ancient Egypt. Casts—bloated for crowd scenes—can be huge. The 1951 revival, starring Laurence Olivier and Leigh (doing it in repertory with Antony and Cleopatra), had a company of nearly 50!

Staller’s skeletal version—he claims it was guided by “Shaw’s production notes, letters, and magazine articles,” as well as by a suggestion Shaw made before he died—replaces ancient Egypt with a wooden structure, spruced up by designer Brian Prather with white draperies, indicating an archaeological site (signs around the auditorium remind us that an excavation is underway).

All are dressed by Tracy Christensen in fashionable, modern-looking, white ensembles, with classical touches, including head wreaths, with a few authentically-inclined garments, such as Caesar’s toga. After Ftatateeta’s death, Cleopatra wears a not particularly Egyptian but definitely eye-catching black gown and golden headdress. 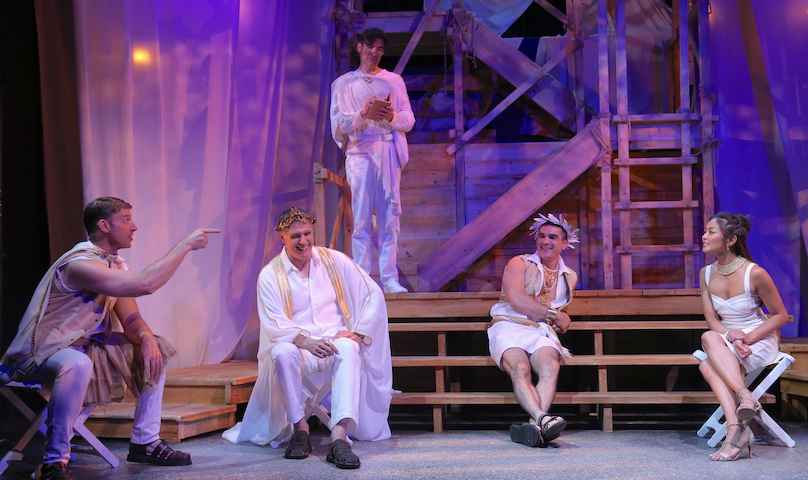 Staller’s premise imagines that the characters are summoned through the power of Ftatateeta—her name becomes Shaw’s running joke—who appears, under Jamie Roderick’s dreamlike lighting, to introduce us to the play. Physically stunning, her shaved head banded in gold and athletic physique encased in a pants suit with flaring panels, she commands the stage with a defiant feminist attitude, acting more like a queen than the queen herself. Ftatateeta is both Shaw’s character (despite his original play calling her a “venerable grotesque”) and our guide to the time when Caesar’s army commanded Egypt, and the 50-something Caesar had a December-June (or May, considering Shaw makes Cleopatra a mere 16) affair with Cleopatra. So insistent is her presence you wonder why the play isn’t called Caesar and Cleopatra and Ftatateeta.

Shaw’s unconventional history play, one of his “Three Plays for Puritans,” employs satirical humor within a melodramatic framework to depict a Caesar more prosaic than glorious, a Nietzschean man of action who is shrewd, good-natured, commonsensical, and strongly opposed to the never-ending cycle of revenge and war.

Not unlike what happens in Pygmalion, Shaw has Caesar shape the kittenish, willful Cleopatra into a politically savvy ruler, much as Henry Higgins models Eliza Doolittle into an independently-minded woman. However, while Caesar may declare, “to the end of history, murder shall breed murder, always in the name of right and honor and peace, until the gods are tired of blood and create a race that can understand,” it’s a lesson the vengeful Cleopatra—who orders the death of her popular enemy—isn’t ready to accept.

So many markers have been removed that little intellectual, dramatic, or comic clarity shines forth from this sprightly but reductionist, two-hour adaptation. Cuccioli (stolidly assured) and Lim (best as a playful sprite) have their expressive moments but, by and large, are unexceptional. Braxton glows but seems to be in another play, while the remaining cast, prone to overacting (Bose in particular), struggle to snare the essential high comedy style. Thus, instead of being engrossed by Shaw’s ideas and characters, we find ourselves lost in a Shavian blur of blah.