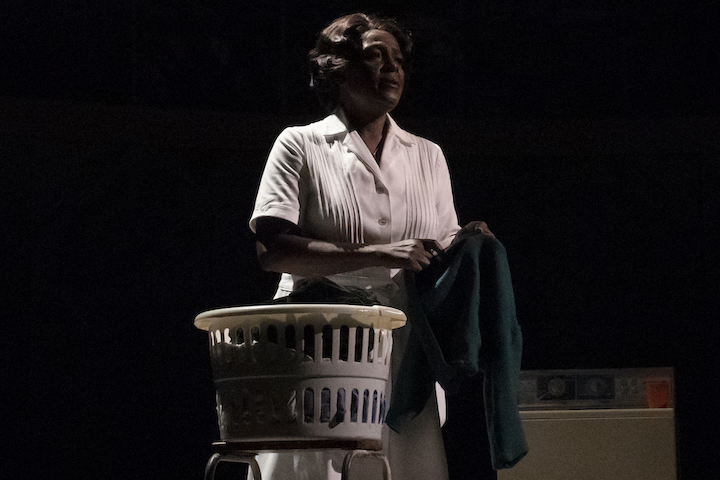 The much-anticipated revival of Caroline, or Change, with book and lyrics by Tony Kushner (Angels in America) and music by Jeanine Tesori (Fun Home), has finally arrived on Broadway. Produced at the Public in 2003, starring Tonya Pinkins, and moved to Broadway in 2004, it received strong reviews but ran for only 136 performances. Eventually, cries were raised for a Broadway revival.

The moment came when Michael Longhurst’s striking production opened at England’s Chichester Festival Theatre, featuring an extraordinary performance by Sharon D Clarke as Caroline. It opened on the West End in 2018 and transferred to Broadway as part of the Roundabout’s 2020 season (with Ms. Clarke still on board) when COVID-19 hit.

Ms. Clarke, a three-time Oliver Award-winner, makes a spectacular New York City debut as Caroline Thibodeaux, a 39-year-old Black maid working for a Jewish family living in Lake Charles, Louisiana (where Kushner grew up). It’s 1963, and the times they were a-changing amid the Civil Rights Movement and the Vietnam War. As recent events indicate, things haven’t changed all that much, making this show as timely as ever. 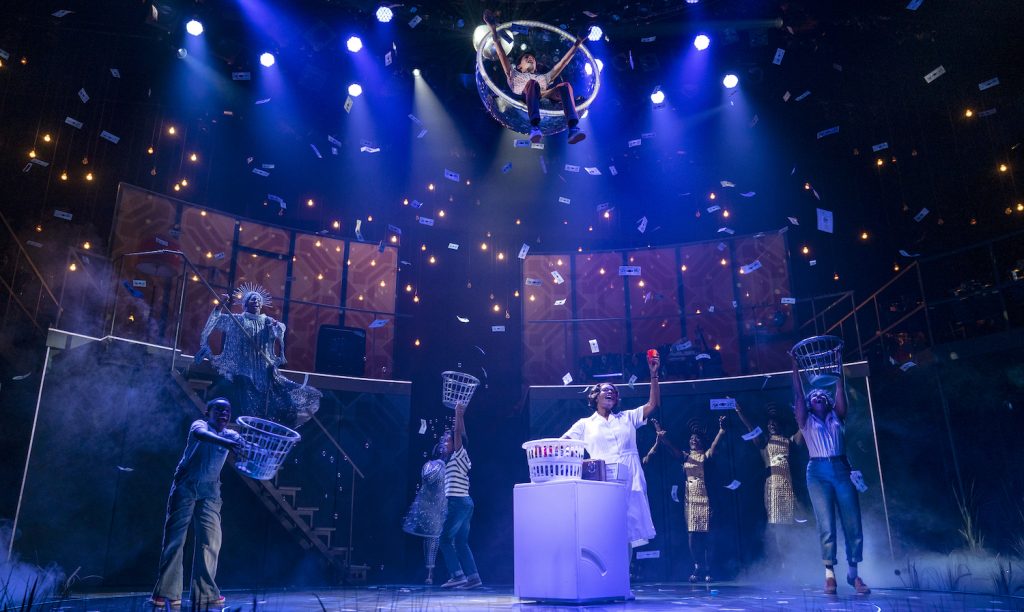 The company of ‘Caroline, or Change.’ (Photo: Joan Marcus)

Caroline’s liberal white employers are Stuart Gellman (John Cariani, excellent), a clarinetist (as was Kushner’s dad), and his second wife, Rose Stopnick Gellman (Caissie Levy, a pleasure). Stuart’s first wife, a bassoonist (like Kushner’s mother), died of cancer. Stuart practices his clarinet to manage his grieving, while the well-meaning Rose struggles to adapt to life in the Deep South, find acceptance from Caroline, and be loved by her troubled eight-year-old stepson, Noah (the talented Jayden Myles Waldman, one of three young actors sharing the role).

Noah seeks maternal comfort in the company of the plain-speaking, churchgoing Caroline, a bitter, divorced mom who slaves away in the steamy basement at $30 a week, barely able to support her four children. Most prominent is her teenage daughter Emmie (Samantha Williams, firing on all cylinders), whose burgeoning activism is connected to a statue of a Confederate hero, a concept strikingly coincidental with current news.

The Caroline-Noah relationship is reminiscent of that connecting Berenice and Frankie in McCullers’s The Member of the Wedding, but more ambiguous — Caroline’s behavior toward Noah being more tolerant than affectionate. His feelings, too, are compromised, as apparent in his racist rant when she disappoints him.

The complex web linking boy, stepmother, father, and maid forms one central nexus. Another coils around Caroline, Emmie, and her friend Dotty (Tamika Lawrence, wonderful), the latter two being fundamental to the theme of social change. That theme touches on everyone, but especially Caroline, caught between the Scylla of social progress and the Charybdis of the status quo; this is a woman who rejects “Black” in favor of “Negro” or “colored.”

Although various background events transpire, most significantly the Kennedy assassination, the principal plot driver—leading to ethical crises—comes from Rose’s questionable notion that the fairest way to teach Noah not to leave loose change in the laundry is to allow the needy Caroline to keep whatever she finds. Kushner uses “change” here to symbolize the play’s preoccupation with money, one of his most oft-spoken words. 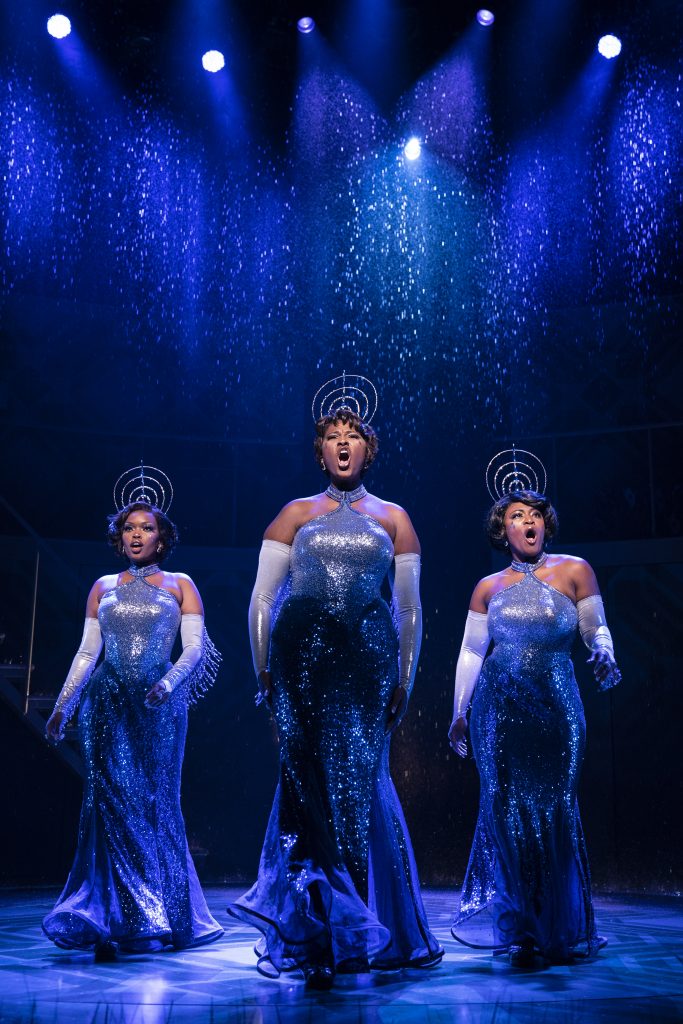 Many lighter, even fantastical, elements soften the tone. Caroline’s life among the tools of her trade is played out with kookily costumed (by Fly Davis, who also did the set) anthropomorphic characters like the bubbly Washing Machine (a delightful Arica Jackson), dressed in white bubbles, or the hotly sensual Dryer (Kevin S. McAllister), with fiery rings around his neck. The sensational Supremes-like trio (Nasia Thomas, Nya, and Harper Miles), representing Caroline’s radios, wear chapeaux resembling sound waves. And the Moon (N’Kenge), a vision in white, sings (beautifully) from a moving, overhead pod, like something from the Ziegfeld Follies.

Longhurst’s staging, supplemented by Ann Yee’s minimal choreography, is exceptional. Working on Davis’s bi-level set, turntable included, backed by Jack Knowles’s dynamic lighting, he makes the show as much a visual experience as an auditory one.

Tesori’s sung-through score might be called a blues-gospel-Motown opera, with sharply rhymed lyrics (a few clunkers among them) with room even for klezmer, which makes a joyful impact during a Chanukah dinner in Act Two. (Bring on the Marxist grandpa [Chip Zien]!) Tesori actually adapts the familiar “Chanukah oh Chanukah” tune to make a standout sequence.

However, too much of the insistently rhythmic music lacks variety, the best moments coming in the klezmer sequence and in Clarke’s tear-down-the-house, eleven o’clock number, “Lot’s Wife,” begging God to turn her to salt so she can crush her pride, her hopes and her grief. Still, this isn’t a show with takeaway songs.

Caroline, or Change’s two hours and 15 minutes are overlong, but by the time it ends, you’ll understand why it’s here and why now couldn’t be a better time to have it around.