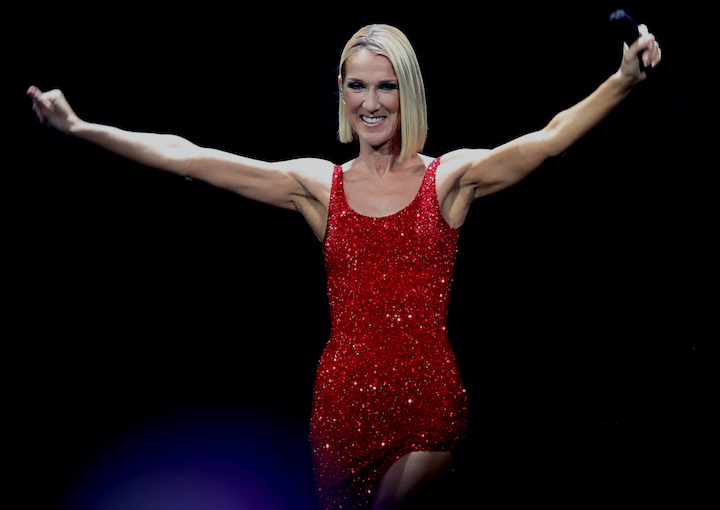 She’d been stuck in the Nevada desert, but she escaped. Of course, this was tongue-in-cheek humor for superstar Celine Dion, who told a diverse, sold-out audience this last weekend that she was thrilled to be playing Atlantic City’s boardwalk hall after a 10-year absence.

Nearly two million spectators saw her Las Vegas residency, which began in March 2011 and ended in June 2019. After a short break, Dion has embarked on an international tour to promote the release of her new album, Courage.

So many artists perform nearly every track from their latest releases, leaving only die-hard fans in the know. Not Dion. After a pre-recorded, black and white video projecting images of the songstress applying make-up, she ascended center stage in a red sequined side-slit gown. “It’s All Coming Back to Me Now,” the 1996 Jim Steinman-penned hit opened the evening and set the tone for a series of power ballads, including “The Power of Love” and “To Love You More,” two other Billboard hits from her earlier years.

After twenty minutes, it was time for a costume change. A brief video montage filled the time while the coutre fashionista reappeared evoking a gender-bending look: puffy white choir gown sleeves with a white tuxedo shirt, black bowtie and pants. It was appropriate for the up-tempo, gospel-spiked number, “Love Can Move Mountains.” She then shed the sleeves, exposing her tightly toned arms. “That’s all I’m taking off tonight,” she joked before performing “Beauty and the Beast” with lead vocalist, Barnev Valsaint.

Dion then took advantage of her fans’ enthusiastic energy with audience participation for the John Farnham classic, “You’re the Voice.” Next, she tapped into her French roots with the bluesy, noir-inspired Tous les blues sont écrits pour toi or “All the Blues Are Written For You.”

The blues didn’t last long before she launched into another mid-90s hit, “To Love You More.”

Finally, Dion introduced the title track of both her tour and her latest album, “Courage,” which lyrics include: 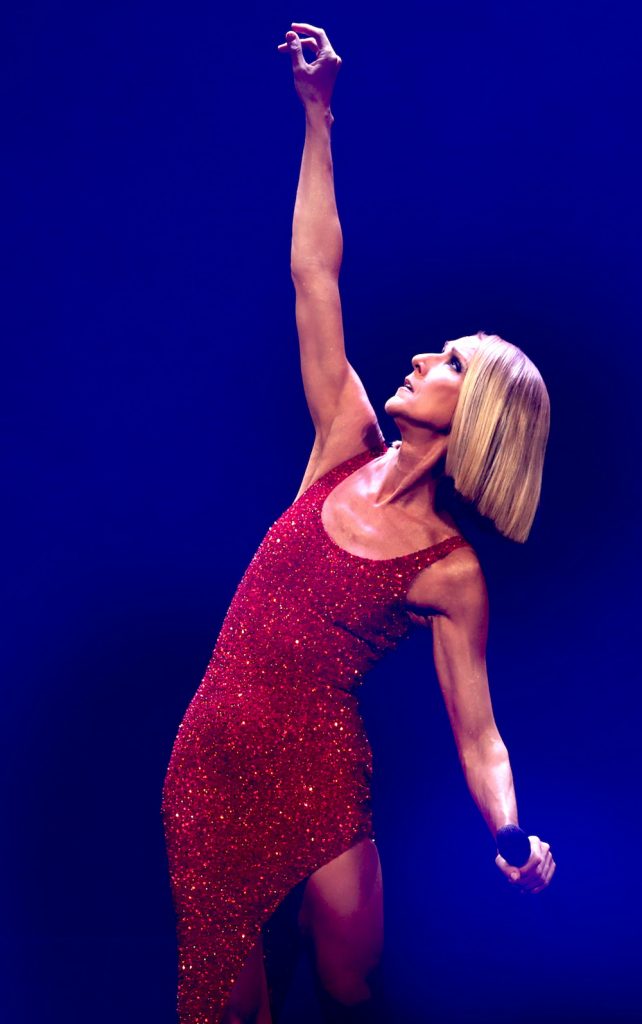 Dion has previously spoken of losses she’s endured in recent years: her husband and brother’s deaths in 2016, and last month, the passing of her 92-year-old mother. The song is a powerful testament of strength on its own and was delivered with even more conviction by a singer who maintains poise and grace in the face of life’s crushing tragedies.

After another gown change (this time, an elegant black with gold embroidery), Dion reached back into the archives for her cover of Eric Carmen’s “All By Myself.”

“Imperfection,” another track from her latest release followed.

“I’ve had the chance to sing with some great singers in the world,” Dion said. “But we’re trying something different on this tour, and I’m singing this next one as a solo.” She then took a seat center stage and sang “The Prayer”— a song she originally recorded with Andrea Bocelli. “Because You Loved Me” followed, and she whisked herself off stage for yet another costume change.

Dion revealed her fun side with a 70s and 80s mash-up of hits including: “Let’s Dance,” “Another One Bites the Dust,” “Kiss,” “River Deep, Mountain High,” (which you can also see  performed by the incredible Adrienne Warren on Broadway in Tina: The Tina Turner Musical) and “Lady Marmalade.” That she delivered them all in a bell-bottomed, silver-sequined jumpsuit was even more priceless. Dion said goodnight, but a keen crowd knew there was more to come.

After her fifth and final costume change, Dion returned, this time adorned in a white Zac Posen dress reminiscent of something Marie Antoinette might have worn. She closed the night with her signature song, “My Heart Will Go On” and a poignant cover of the John Lennon favorite, “Imagine.”

The indefatigable performer solidified her status as one of the finest pop music artists working in the industry today and will continue bringing Courage to her adoring fans around the world through September 2020.

Don’t Miss
Atlantic City will be hosting some terrific events this spring and summer. Check out The Broadway Blog’s top picks: