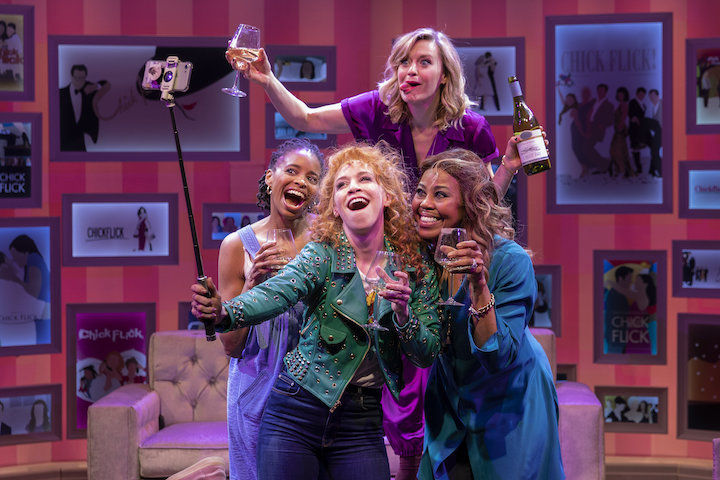 Chick Flick the Musical, with book, music and lyrics by Suzy Conn, is a charming excuse to take your girlfriend, gay friend, sister or mother to an Off-Broadway show that won’t disappoint.

The premise of this well-timed musical is a familiar trope, simultaneously lampooning and celebrating the wide world of romantic comedies and all their fabulous catch-phrases. In fact, identifying which rom-com these various catch-phrases hail from has evolved into a drinking game for the play’s four characters.

As we meet the ladies, this “sisterhood of the traveling tequila” has come together at Karen’s for a long overdue evening of chick flicks, commiseration, and Chardonnay, aka “lunch wine.” Throughout the next 80 minutes, they spill the tea, down some drinks, and have a lot of laughs, all while belting out 14 original tunes. 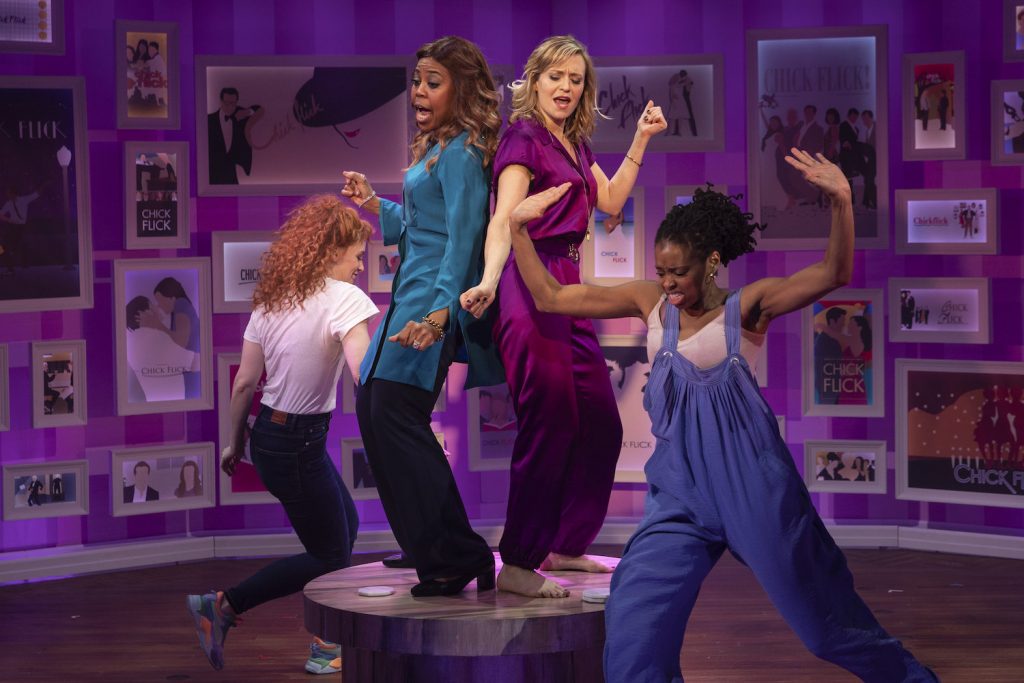 Like the characters, you’ll race to identify all your favorite familiar quotes, from “You had me at ‘hello’” to “I’ll have what she’s having.” That’s not to say that Chick Flick is all fluff. These women’s lives are far from perfect, even as each envies the other’s lot. Karen’s dreams of being a writer have been pushed to the back burner as she’s relegated to organizing charity benefit galas. And her bestie Dawn is not winning any Oscars; in fact, she can’t even land a commercial for a discount blue jeans outlet, forced instead to hawk Beauty Blossom cosmetics to make a living.

Greeting card writer Sheila has trouble finding love after dumping her ex Gary, aka ClownBalls427, and outlines her struggle in “From Meet Cute to Happy Ending.” Sad baker Meg has resorted to “Eat Your Feelings” after finding further evidence that her cad of a boyfriend Jeff is cheating on her yet again.

Using the plot points from many rom-coms, the four women work through their individual issues, with a little help from each other and their patron saint, three-time Oscar winner Meryl Streep, à la the number “WWMD” (“What Would Meryl Do?”). Sheila decides to stop being “50 Shades of Cray,” trusting that true love will find her; and after a pregnancy scare, Meg decides she actually wants to have a kid — just not with Jeff.

Karen and Dawn work through a petty argument and discover with surprise that they’re each jealous of the other’s life. But being besties, they use the moment to boost each other up: Karen convinces Dawn not to give up on acting, and instead, to perform her own one-woman show, like back in their college days. Dawn agrees, with the caveat that Karen (whose last writing project was the P.T.A. pamphlet “The Facts of Lice”) will help write the show. After more than a dozen spirited numbers, it’s a very heartening outcome.

So if you’ve got the urge to “forget yourself and live Joan Wilder’s life” via a hilarious musical with a flashy, Dreamgirls-inspired finale, head over to the Westside Theatre. To quote everyone’s favorite Pretty Woman, ignoring this diamond in the rough would be “a big mistake. Big. Huge.”