Top Posts
‘Company’ to Hit the Road on North American...
Meet the Full Cast of ‘Shucked,’ Coming to...
Full Cast for ‘Parade’ Announced
Stephen McKinley Henderson Gives the Performance of His...
The McKittrick Hotel Announces the Return of ‘The...
Broadway Stars Honored with Academy Award Nominations
Taylor Trensch, Danny Wolohan, and More Join the...
A Gay Road Trip Comes to The Brick...
Maude Apatow of ‘Euphoria’ is the Next Audrey...
Tony Award Winners to Star in ‘Hercules’ at...
Home Reviews A Mixed Meal of Reviews for ‘Chicken & Biscuits’
Reviews 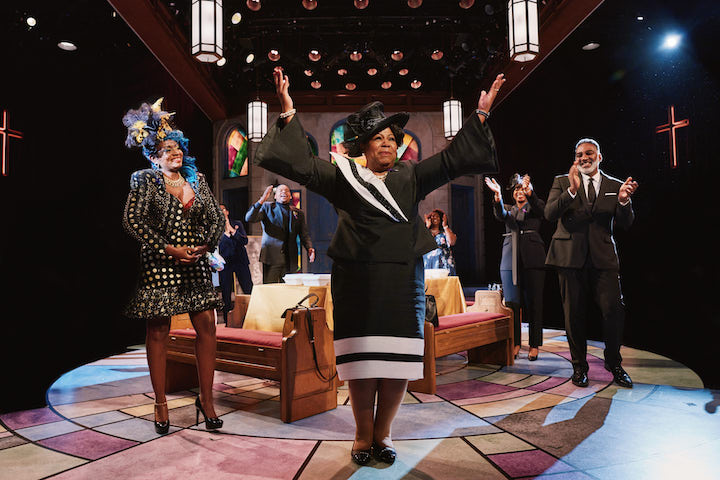 Chicken & Biscuits, Douglas Lyons’ new Broadway play, opened on Sunday, October 10, and the reviews are flowing like gravy.  Lyons’ comedy is directed by Zhailon Levingston, who, Variety notes, “at 27-years-old becomes the youngest Black director in Broadway history.” This is one of the many milestones for this piece, which is helping reopen Broadway and is among the record number of new plays by Black writers to be part of this season. Reviews for the play, now at the Circle in the Square Theater, are mixed as critics feel the play relies on old tropes (a patriarch’s funeral bringing zany family members together) in a way that is not always effective. Still, many applauded the cast, which features Norm Lewis, Michael Urie, Cleo King, and others.

A post shared by Chicken and Biscuits Broadway (@chickenandbiscuitsbway)

“Whether it succeeds for you will depend largely on your taste for Broadway comedies of a type that otherwise went out of style a few decades ago,” Jesse Green writes for The New York Times. “In any case, Lyons is more interested in the family’s moment-by-moment byplay — its laugh track and tear track — than in drawing realistic character portraits or scoring sociological points. The cast, including five actors, also making their Broadway debuts, for the most part fills in the characters’ outlines confidently.”

Many critics noted the long runtime of what should have perhaps been a zippy comedy. Adam Feldman, who gave the show a two-star review in Time Out, wrote, “Advertised as 100 minutes long, Chicken & Biscuits actually lasts two full hours without intermission, and despite some successful laugh lines and several game performances, it drags its weight with palpable effort.” Helen Shaw in Vulture similarly noted, “Going to Chicken & Biscuits does feel like being fed by loving but overweening relatives. There’s a bit too much of it — the published running time notwithstanding, this show lasts more than two hours with no intermission — but it’s a meal full of comfort dishes, difficulties resolved, and love requited.”

Ayanna Prescod, notably, was one of the few Black critics to review this show about and created by Black people, revealing the racial disparities that have long defined theater criticism. Her review was the most glowing, in which she wrote, “Chicken & Biscuits is a feast of a production, and there is enough sustenance and libation for the entire family.  Douglas Lyons’ new Broadway play [has] a brilliant script that’s fresh, relatable and laugh-out-loud funny.   For all its comedic moments, (which are many), this story’s center is Black love, forgiveness and healing. ”