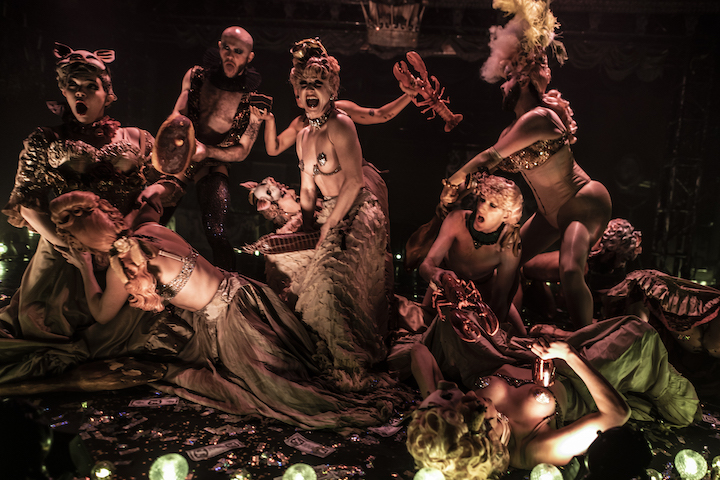 We’ve all been there. Who, at one time or another, hasn’t been lustful or let pride, jealousy, greed or anger get in their way? Who hasn’t (even briefly) fallen prey to their own sloth or gluttony?

Company XIV, under the direction of founder and baroque dance bad boy Austin McCormick, is back with their latest offering Seven Sins, a lush evening of dance, cabaret, cirque and burlesque that draws its inspiration from our shared, universal iniquities. And while this theatrical tour of turpitudes takes its time before delivering its namesake’s promised depravity, it could well be this groundbreaking troupe’s finest work to date.

Framed as a vaudeville, Seven Sins, as its name implies, is an exploration of our darker nature. True to Company XIV form, McCormick has assembled his multi-talented troupe of quadruple-threat, specialty act performers to embody each sin. 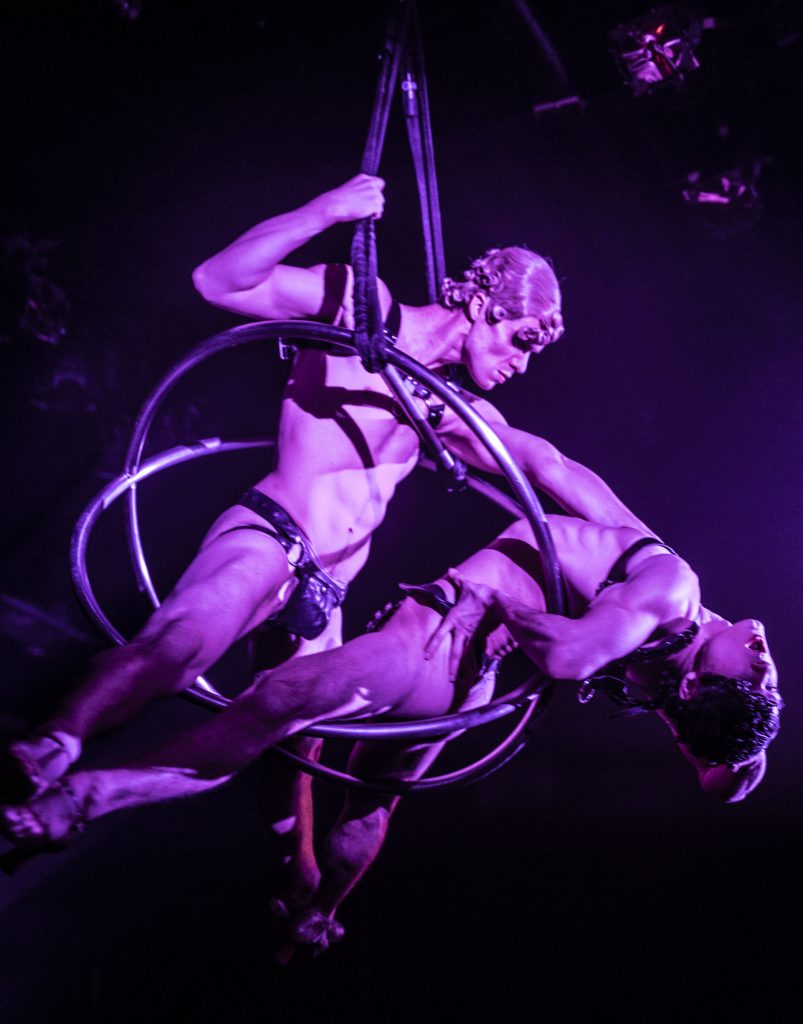 Vanity enters with a parade of semi-clad peacocks and ends with a coloratura aria (performed by the always spectacular Marcy Richardson) in a spinning aerial cage. Wrath is expressed through the feet of company member Demi Remick in a thrilling, rapid-fire tap dance across banquet tables. Lust becomes an equal opportunity lap dance by the über-flexible Lillin. Jealousy features a duet of queer, wandering-eyed lovers (Troy Linglebach and Nolan McKew) spinning in a rig over the audience’s heads. Linglebach returns to give Sloth the trapeze treatment. Stripper dollars rain down on Greed (a pole-dancing Marcy Richardson). And mouths in the audience are agape as sexy Sam Urdang juggles food and wine in the Gluttony segment.

For narrative, McCormick injects the Genesis story of Adam and Eve (spectacularly danced by Scott Schneider and Emily Stockwell) and their fall from grace as the impetus to enter his floorshow of wickedness. And while the first act feels, at times, a bit protracted (it could work as a stand-alone ballet), it’s a necessary set-up for the subsequent parade of newfound vices explored in Seven Sins.

To complement the visual thrills, McCormick incorporates equally intoxicating musical performances into the proceedings. Sultry pop songstress LEXXE (who originated the role of Alice in Company XIV’s Queen of Hearts last season and is sadly under-utilized as a performer with this outing) penned eight original songs for the evening. Bearded chanteuse Pretty Lamé’s virtuosa versatility is on full display performing “Habanera” from Bizet’s Carmen and “Bon Appetit” by Katy Perry. And as The Devil, the smoky and steely-voiced Amy Jo Jackson is nothing short of astounding.

As with all productions at Company XIV’s Bushwick venue, Seven Sins is thoroughly immersive with performers often at arm’s length from audience members. Resident designer Zane Pihlström continues to provide a feast of baroque-inspired stagecraft and costumes but takes it a step further with a pair of banquet tables that dominate the center of the audience. And for the twelve self-indulgent audience members lucky enough to snag seats, Seven Sins hits all five senses.

The “Serpent VIP” experience elevates the Company XIV experience to an unprecedented level. Revelers are greeted with chilled lobster and a piccolo bottle of champagne. Throughout the evening, without leaving their seats, these dozen deep-pocketed denizens (tickets run $265 each) become part of the action as company members serve them food, bespoke cocktails and sweets. Secret compartments in the tables open to reveal chilled glasses of absinthe, truffles and even a scratch-off lottery ticket (I won a dollar on mine) for the Greed segment.

As thrilling as McCormick’s detour through depravity is, the aha moment comes during the evening’s quiet denouement when visual stage magic becomes obscured by a harsh halogen work light, strung up unceremoniously. As Jackson delivers Peggy Lee’s ode to disenchantment “Is That All There Is,” we’re robbed of lighting designer Jeanette Yew’s magic and forced to look at ourselves. Do we indulge in or avoid vice? Or do we just accept it and try to live our best selves?

Sin has never been so enticing. 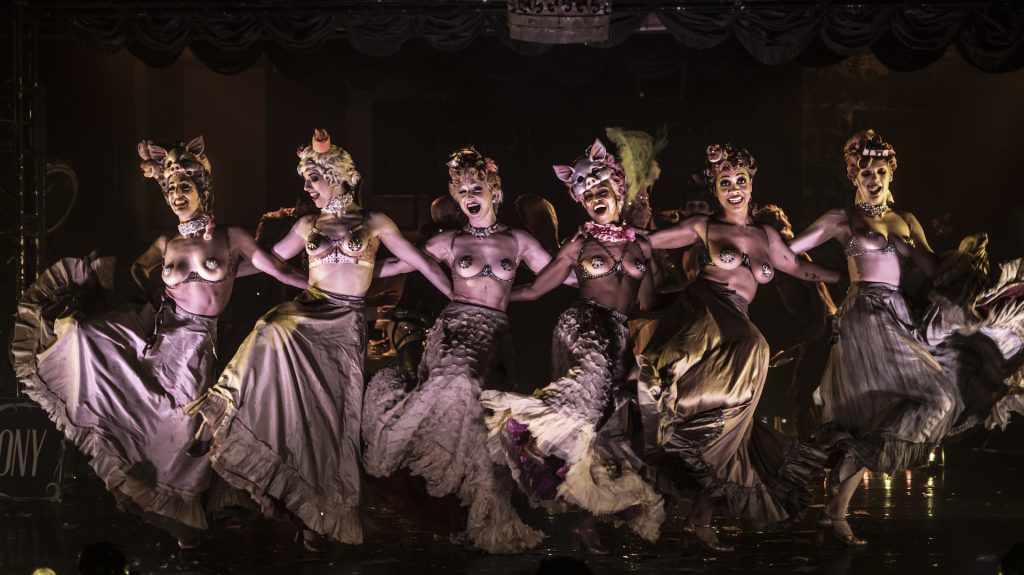