Top Posts
Stephen McKinley Henderson Gives the Performance of His...
The McKittrick Hotel Announces the Return of ‘The...
Broadway Stars Honored with Academy Award Nominations
Taylor Trensch, Danny Wolohan, and More Join the...
A Gay Road Trip Comes to The Brick...
Maude Apatow of ‘Euphoria’ is the Next Audrey...
Tony Award Winners to Star in ‘Hercules’ at...
‘New York, New York’ Finds its Two Leads
Full Casting Announced for Oscar Isaac-Led ‘The Sign...
Disco Pop Musical ‘Here Lives Love’ to Bow...
Home Beyond Broadway Head to the Ranch for a New LGBTQ+ One-Act Play
Beyond Broadway 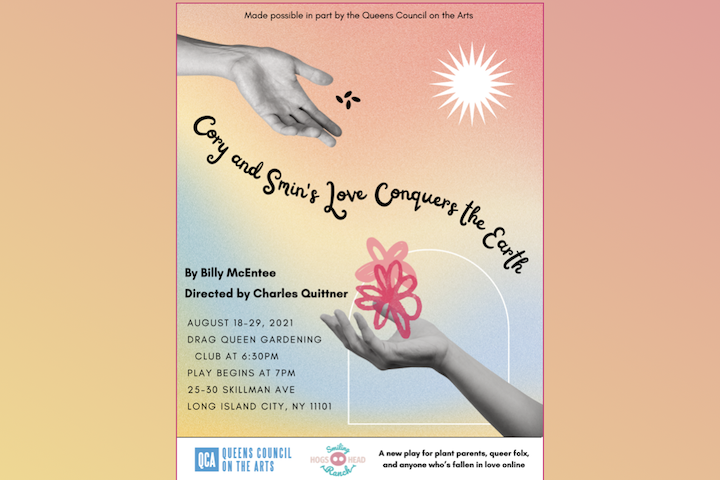 Plato said, “necessity is the mother of invention.” It’s also been said, according to Lumen, “that when Plato was in his late teens or early twenties, he heard Socrates teaching in the market and abandoned his plans to pursue a literary career as a playwright; he burned his early work and devoted himself to philosophy.”

Nevertheless, he still had a great appreciation for the arts and we imagine he’ll be looking down upon Long Island City later this month when the one-act play, Cory and Smin’s Love Conquers the Earth, arrives at Smiling Hogshead Ranch.

Produced through a grant from the Queens Council on the Arts, the play invites theatergoers to imagine themselves a few years from now, when cities have banned gas-fueled cars and drag queens host gardening clubs. Two enamored teens on opposite sides of the country struggle to meet in the middle: Cory wants a relationship, Smin wants a revolution. Each is difficult to attain when there are college essays and manifestos to write, mom’s shopping to do, and maybe a planet to save. Anthemic and bawdy, Cory and Smin’s Love Conquers the Earth gives Zoomers, Boomers, and everyone in between a future to fear — or believe in.

COVID SAFETY
For this outdoor show, audiences will be capped at 40 total. Vaccines are required. Since we will be outdoors, masks are optional though those terms may change as we keep an eye on the Delta variant.