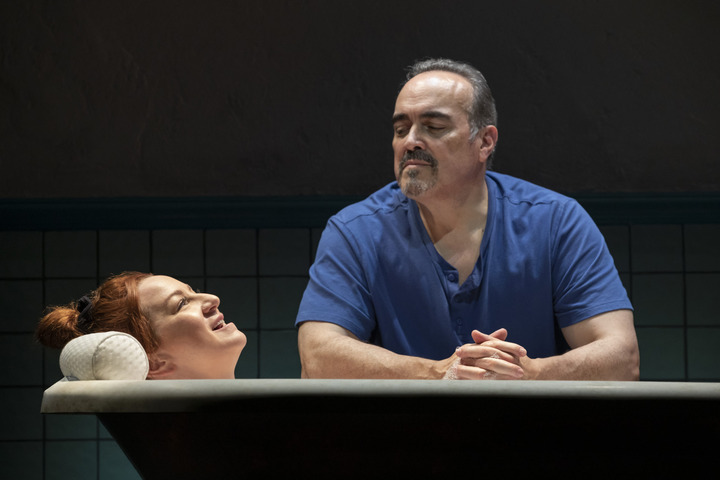 Photo of David Zayas and Katy Sullivan and by Julieta Cervantes.

There are a few theatrical devices that are always sure to move or delight. One is snow falling on stage, another is disparate characters in separate storylines unexpectedly crossing paths. Cost of Living features both of these, and as affecting as both are, neither are as impactful as another gesture in Martyna Majok’s play: characters bathing one another.

Majok’s play, now at Manhattan Theatre Club’s Samuel J. Friedman Theatre, won the Pulitzer Prize for Drama in 2018. It is groundbreaking in its depiction and casting of disabled people (here, Gregg Mozlaga and Katy Sullivan, both fantastic), and is a play — sometimes nuanced, sometimes treacly — about care and the thorny relationship between those who give and receive it. Such actions include teeth brushing, bottom wiping, and (most visible in this play) bathing.

At various points in the play, Jess (Kara Young) washes her well-to-do employer, John (Mozgala), who has Cerebral Palsy, and Eddie (David Zayas) bathes his ex, Ani (Sullivan), who lost her legs in an accident and lives in an apartment of a beige color that, per Eddie, feels like walking into a “paper bag.”  John and Ani’s different bathrooms, as designed by Wilson Chin, highlight the characters’ varied socioeconomic statuses, and, as directed by Jo Bonny, the staging for their bathing is as tender as the act itself.

Unfortunately, the rest of the play is not as graceful. Scene transitions are smooth and performances are measured, but Majok’s dialogue can feel predictable and her characterizations underwritten. Take John and Jess: it feels as cloying that the latter would fall for her boss in a few meetings as it is predictable that, when he asks her to work a Friday night, it’s not because he reciprocates her feelings but because he has another date coming over.

As exes after decades of being together, however, Ani and Eddie have more of a built-in rapport. Sullivan’s wicked smile and contagious laughter reveal crass Ani’s beating heart; her performance is at turns hilarious and heart-wrenching, and her confusion around how to feel about her ex-turned-caregiver is beautifully explored.

Nonetheless, many scenes drag and veer toward maudlin sentimentality. At an hour and 50 minutes, the play could have shaved off a few minutes in dramatic pauses alone. When Cost of Living intentionally and wisely takes its time, showing audiences the quotidian lives of its extraordinary characters — Ani lounging in a bath, John getting itchy in a shirt he can’t adjust himself — there may be nothing more captivating on Broadway at the moment.