Top Posts
‘B is for Broadway’ Feb 1 Release to...
Broadway Photographer Matthew Murphy Heads Underground to Help...
Keala Settle Heads to West End to Join...
‘The Kite Runner’ Heads to Broadway for Limited...
First Look at Audible’s ‘Long Day’s Journey Into...
Robert Cuccioli Stars in ‘A Touch of the...
Tim Rice Teases that ‘Chess’ May Come to...
‘Girl From the North Country’ Announces Closing, Sort...
NYC Broadway Week 2-For-1 Tickets Now on Sale
Brittney Johnson Will Be First Black Glinda in...
Home Buzz COVID-19 Shutters ‘Aladdin’ After Reopening Night
Buzz 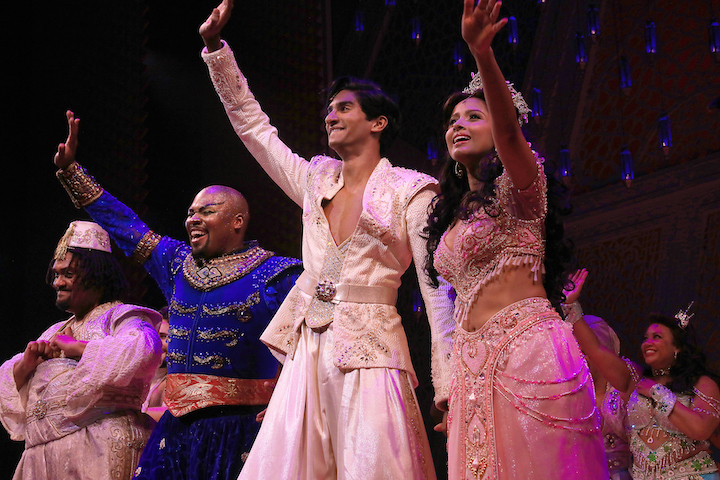 The celebrations were short-lived after Aladdin‘s highly-anticipated return to Broadway.

“Through our rigorous testing protocols, breakthrough COVID-19 cases have been detected within the company of Aladdin at the New Amsterdam Theater,” Disney Theatrical Productions said in a notice nixing the show just a half-hour before the Wednesday night curtain call, The Daily Beast reports.

Despite all of the excitement surrounding opening night, cracks in the COVID protocol foundation could be seen on opening night, with three understudies onstage. The incident shows just how vulnerable communities are to the Delta variant. Vaccinations are required for all cast and production staff, as well as audience members over 12.

The single performance was Michael Maliakel’s Broadway debut as the title character. Producers are expected to make an announcement about the show’s return in the coming days.